MOSCOW (Sputnik) – Commander of the US Guantanamo Bay prison Rear Adm. John Ring has been fired over the a “loss of confidence in his ability” to lead less than two months before he was to leave the post, local media reported.

According to Col. Amanda Azubuike, a spokeswoman for the Southern Command that oversees the Guantanamo Bay prison, Ring was fired after a month-long investigation that was launched in March. She provided no further details about the investigation.

Guantanamo, also known as Gitmo, has been a detention camp for international terrorists since 2002, when the first 20 people accused of fighting alongside Islamist extremists in Afghanistan were taken to the prison. Since then, hundreds of so-called enemy combatants from Afghanistan, Iraq, Saudi Arabia and Yemen have been sent to the detention facility. 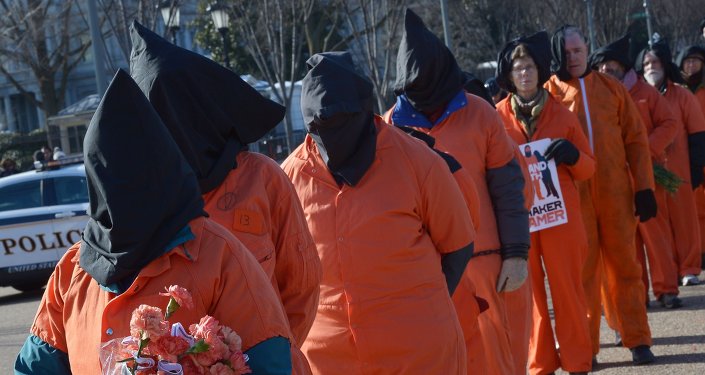 © AFP 2019 /
Ex-Gitmo Prisoner on Alleged al-Qaeda Suspect UK Interrogation: Strange Nobody's Been Prosecuted for This
The status of enemy combatant, created by the administration of former US President George W. Bush, used to deprive prisoners of protections under the Geneva Conventions. The term was abandoned in 2009 under then US President Barack Obama.

Gitmo has long been criticized for its mistreatment of prisoners and abuses, with human rights activists and the general public calling for its closure. Obama promised to close the prison but failed to do so during his time in office. Last year, incumbent US President Donald Trump signed an order to keep the Guantanamo Bay prison open.

Currently, 41 prisoners are held in the Guantanamo Bay prison. The facility also provides with jobs 1,800 troops and civilian employees.