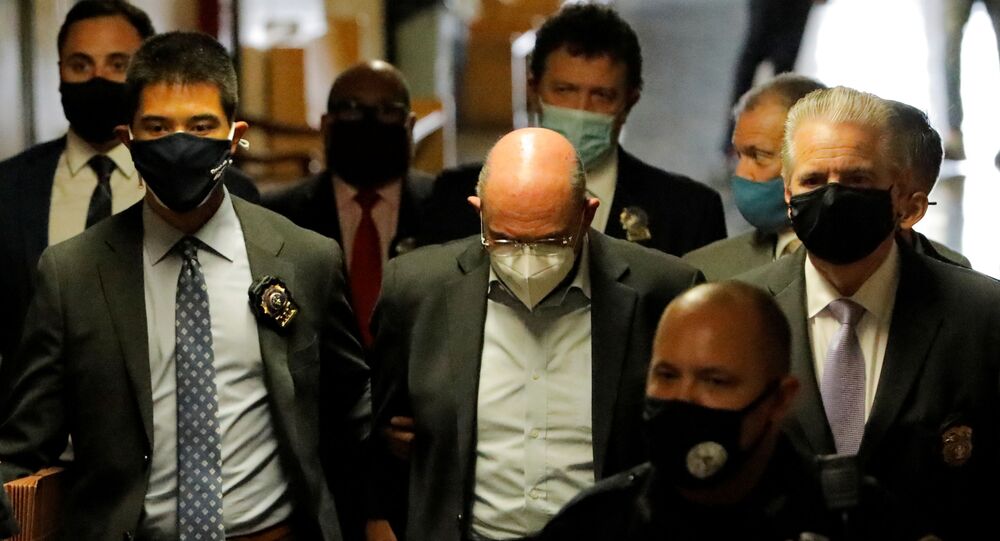 Earlier in the day, Allen Weisselberg, the chief financial officer of the previous president’s self-named conglomerate, turned himself in to authorities. His attorney said Weisselberg would plead ‘not guilty’ and fight the charges in court. US media have characterized the tax fraud case as the most direct attack on Trump and his businesses to date.

The Manhattan District Attorney’s office has unsealed criminal charges against the Trump Organisation and its CFO, Allen Weisselberg, with prosecutors charging the official with grand larceny in the second degree, and the company itself with "the crime of scheme to defraud in the first degree."

State prosecutors accuse Trump Organisation figures of a "sweeping and audacious illegal payment scheme," charging the company, Weisselberg, and Trump Payroll Corporation with involvement in a 15-year tax evasion scheme going back to the year 2005. The indictment includes 15 felony counts, including fraud, grand larceny, falsification of business records and conspiracy.

"The defendants, in the County of New York and elsewhere, during the period from on or about March 31, 2005, to on or about June 30, 2021, as set forth below, engaged in a scheme constituting a systemic ongoing course of conduct with intent to defraud more than one person and to obtain property from more than one person by false and fraudulent pretenses, representations and promises, and so obtained property with a value in excess of one thousand dollars from one or more such persons, to wit: the United States Internal Revenue Service, the New York State Department of Taxation and Finance, and the New York City Department of Finance," an excerpt from the 25-page indictment alleges.

In the wake of the indictments, an unnamed attorney for the Trump Organisation told reporters that the conglomerate remains "very optimistic" and "hopeful" that Thursday's indictment would not not have a significant impact on the company.

Trump Organisation attorney Alan Futerfas called Thursday's charges an "inappropriate precedent" driven by "political forces," not criminality, and promised that the charges would be "vigorously contested by people who are experts in the field and know this law very, very well."

"If the name of the company was something else, I don't think these charges would have been brought. In fact, I am fairly certain they would not have been brought if the name was a different name," Futerfas asserted to reporters.

Weisselberg pleaded not guilty to the charges against him at his court hearing after being brought into the courthouse in handcuffs, flanked by police and FBI officials. He was released on his own recognizance and ordered to turn in his passport after his hearing.

The charges come in the wake of District Attorney Cyrus Vance’s wide-ranging and ongoing investigation into Trump’s tax records, which officials confirmed last month was no longer simply a civil matter. The Democratic attorney general in August 2019 subpoenaed eight years of Trump’s personal and business tax returns, with the records handed over to his office in February 2021 after a lengthy legal battle which went to the Supreme Court.

Trump Organization executives, including Weisselberg, were previously reported to have been accused of evading taxes on fringe benefits such as cars, apartments and private school tuition received from the company. Investigators have also threatened to take the probe further if evidence of additional crime is found. Trump in early 2017 put his businesses into a blind trust overseen by his adult children and Weisselberg, after becoming president, with the CFO tasked with managing the conglomerate’s day-to-day affairs.

© AP Photo / Evan Vucci
Trump Organisation CFO Surrenders to Authorities in Manhattan Amid Tax Probe
Thursday’s charges are the first of what may be a broader campaign of civil and criminal litigation against the business mogul and former president over his tax records, which Trump never released ahead of the 2016 election or during his four years in office.

Trump has long claimed that the tax investigation against him and his company is part of his political enemies' broader efforts to smear him and try to stop him from taking another shot at the presidency in 2024, after the contentious and scandal-prone November 2020 vote. Democrats in the US House impeached Trump twice, the only US president to claim the statistic, in early 2020 and again in early 2021, but the Senate acquitted him on both occasions. Some lawmakers have also sought to use the 14th and 25th Amendments to the US Constitution to argue that the 75-year-old is ineligible to serve, either for having "engaged in insurrection or rebellion" or due to being mentally and/or physically incapacitated.