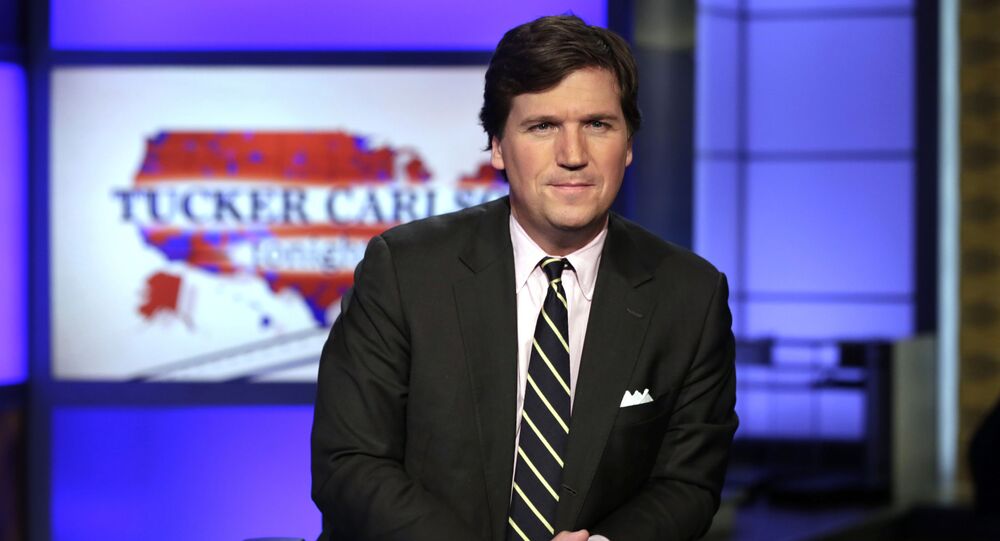 'This is Scary': Tucker Carlson Says Biden Administration Spying on Him for 'Political Reasons'

Earlier in June, the "Tucker Carlson Tonight" anchor pointed the finger at the FBI for helping to organise, coordinate, and orchestrate the deadly 6 January Capitol riots in Washington.

Fox News host Tucker Carlson has argued that the Biden administration "is spying" on his show and he has "confirmed that".

"Yesterday we heard from a whistleblower within the US government who reached out to warn us that the NSA, the National Security Agency, is monitoring our electronic communication and is planning to leak them in an attempt to take this [Carlson Tucker Tonight] show off the air", the 52-year-old anchor told his viewers on Monday night.

He claimed he was being spied on by the NSA "for political reasons", asserting the whistleblower had information that "could have only come from" accessing Tucker's own texts and emails.

"There's no other possible source of that information. None", the host said, adding that "spying on opposition journalists is incompatible with democracy".

Referring to the NSA allegedly spying on his show, the 52-year-old noted that "this is scary", and that all this should be stopped "right away".

"This morning, we filed an employer request asking for all information that the NSA and other agencies have gathered about the show. We did it mostly as a formality and contact of the press office of both NSA and the FBI [Federal Bureau of Investigation] you don't expect to hear much back, that's the way that usually goes. Only Congress can force transparency on the intelligence agencies and they should do that immediately", Carlson underscored.

The Fox News host spoke a few weeks after alleging that FBI operatives helped organise, coordinate, and orchestrate the deadly 6 January riots at the Capitol complex as he cited court documents referencing over a dozen mysterious "unindicted co-conspirators".

The Capitol riots took place about 2 miles (3.2 km) from the White House, where then-US President Donald Trump had organised a separate "stop the steal" rally against Congress' certification of the 3 November 2020 US presidential election.

© REUTERS / Carlos Barria
Video: Trump Warns 'People Are Furious' Over Election Results in First Interview Since Capitol Riot
While Trump urged his supporters to "never give up" and to "fight like hell" in his speech, he also urged people to "stay peaceful" and "go home" on Twitter after violence broke out at the Capitol.

Five people, including a Capitol police officer, were killed in the 6 January mayhem, which Democrats and some anti-Trump Republicans blamed on the president. Twitter and Facebook banned Trump from their platforms for "inciting violence", and Democratic lawmakers in the House used the events to impeach him for a second time. The impeachment trial concluded on 13 February, with the Senate voting 57–43 to convict Trump of inciting insurrection, falling just 10 votes short of the two-thirds majority needed by law, and Trump was therefore acquitted.