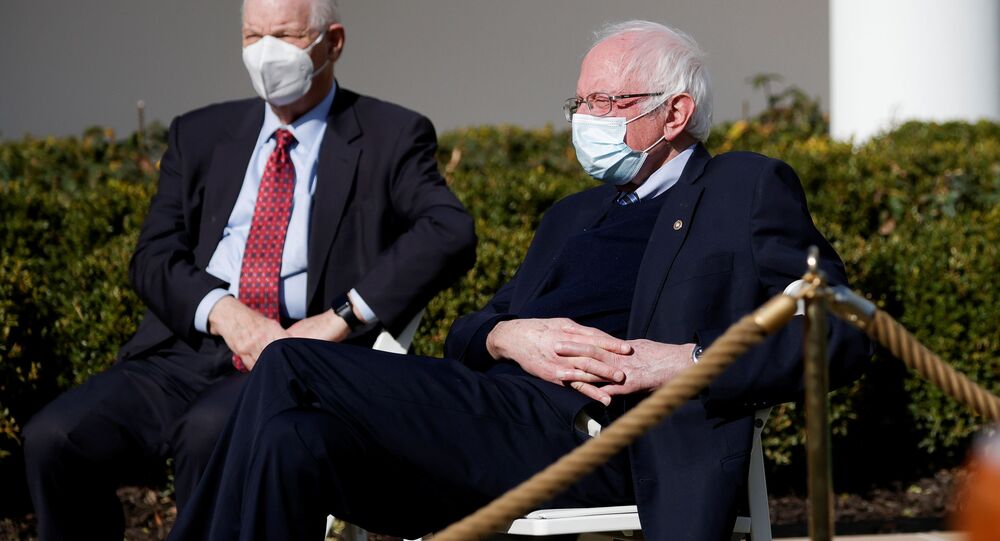 The ongoing conflict in the Gaza Strip, the worst in years, was triggered by court rulings to evict Palestinian families from the Sheikh Jarrah neighbourhood of East Jerusalem and banning Palestinians from visiting holy sites during Ramadan.

American lawyer Alan Dershowitz has lashed out at Vermont Senator Bernie Sanders, calling him “a self-hating Jew” and “the great villain” after the latter wrote an opinion piece in the New York Times commenting on the current Israel-Gaza conflict. Dershowitz was speaking as a guest on the Chris Salcedo Show on Newsmax TV on Friday.

He said Sanders “is willing to see Israel be defeated militarily by a terrorist group because he's on the hard left.”

© REUTERS / AMIR COHEN
Israeli Media Reveals When to Expect Ceasefire With Gaza
Sanders’ opinion piece was published in the New York Times on Friday – the senator wrote that "the United States should be urging an immediate cease-fire," and that the new administration "must recognise that Israel has the absolute right to live in peace and security, but so do the Palestinians."

“The great villain of this piece is Bernie Sanders. Bernie Sanders is basically encouraging Hamas to continue what it's doing. And the squad, and the New York Times,” Dershowitz said.

Speaking about Israeli actress Gal Gadot receiving negative responses to her post on social media calling for peace in the Israeli-Palestinian conflict, the lawyer complained about “what the internet allows us."

“...you get the social media, supporting Hamas, The New York Times supporting Hamas, and it sends a very powerful message: do it again, kill children...kill civilians...commit war crimes, you'll prevail on this because of the anti-Semitism...you can be a Jew and an anti-Semite.”

Dershowitz then targeted Democratic members of Сongress such as Ilhan Omar, Rashida Tlaib, and Alexandria Ocasio-Cortez for "cheering for Hamas," claiming the organisation is “sending rockets aimed at Israeli civilians.”

The military wing of the Palestinian movement Hamas announced on Saturday that it had launched an attack on Israeli soldiers in Kissufim kibbutz, a military post near the border with the Gaza Strip.

At the same time, Hamas continues to launch rockets at Tel Aviv in response to Israel striking a refugee camp in the strip, which caused 10 deaths, according to the Palestinian movement.

© Sputnik
Israeli Artillery Barraging Gaza City as Palestinians Flee City Outskirts
The situation on the border of Israel and the Gaza Strip escalated on May 10. About 2,000 rockets had been launched by Hamas by Friday evening, with around 350 being unsuccessful, the Israeli military said.