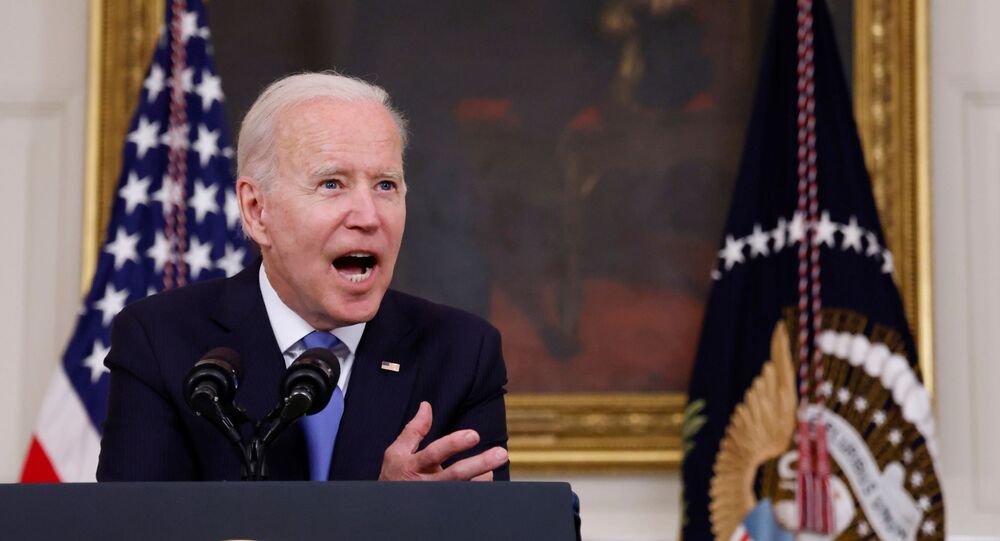 US President Joe Biden, who is frequently ridiculed for his verbal gaffes, had his first solo press conference as US president in late March, with some observers immediately moving to slam the event for being "staged" and criticising the POTUS for using cheat sheets.

White House Press Secretary Jen Psaki, speaking to David Axelrod on his podcast "Axe Files" on Thursday, revealed that the US president's communications team has recommended that he not take impromptu questions from reporters.

According to Psaki, Biden takes questions "nearly every day that he's out in front of the press."

"That is not something we recommend. In fact, a lot of times we say ‘don’t take questions,'" she noted. "But he's going to do what he wants to do because he's the president of the United States."

Particularly, Axelrod and Psaki recalled an incident when Biden was questioned by a CNN reporter, Kaitlan Collins, in a White House hallway, asking him whether an increase in the minimum wage to $15 would be included in the new coronavirus relief package signed into law in March.

The podcast host suggested that Biden's "honest" answer, that he didn't think the bill would include the minimum pay boost, may have given Psaki "a lot of heartburn" and made her question "why are we allowing him to roll around the hallways doing impromptu interviews".

Psaki laughed at the joke, noting that the incident happened as Biden was "walking home". She also addressed White House accessibility for reporters, arguing that it is not something that can fully satisfy everyone.

"If you do a press conference every other week, that doesn't satisfy them, they're gonna push more, that's their job", Psaki said, adding that if Biden had more press conferences, the questions would be about "Liz Cheney, and Mitch McConnell, and Marjorie Taylor-Greene, and impeachment".

She moved to suggest that the White House press team's focus should be about how to "use his [Biden's] time", and concentrate on the questions that the public "cares about", giving the examples of the pandemic and the economy.

Speaking about how Biden receives criticism over not visiting the border amid what many consider to be a migrant 'crisis', Psaki claimed that more people are worried about the pandemic and the economy than about the border, but also noting that the administration is still "focused" on the migrant situation.

Her comments come as critics pique Biden for not appearing enthusiastic to frequently meet with journalists, and only having one solo press conference as president, in late March, some two months after he was sworn into office. Even when Biden delivered the conference, he faced criticism over using cheat sheets, with some suggesting that the event was "staged".

During public addresses, Biden is prone to gaffes or slips of the tongue, with many becoming objects of ridicule. One of the latests gaffes occurred during a speech on Tuesday in which the president mistakenly urged everyone to visit the US vaccine website "vaccines.gum" instead of "vaccines.gov".