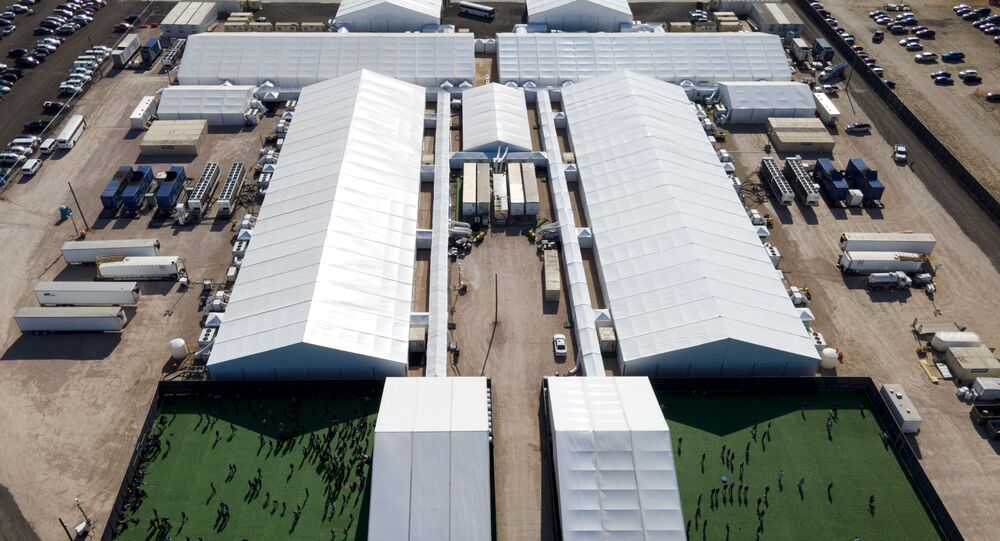 A US government-run sheltering facility for illegal migrants crossing the southern border of the United States, in Donna, Texas, has more than doubled in size in recent weeks, Fox News reported on Wednesday

According to the report, authorities are scrambling to find space to accommodate an overwhelming influx of underage people crossing the border, and new photos made by the outlet using drones show the degree to which the migrant facility has expanded since March 23.

Here is a visual of the expansion of the tent facility in Donna, Texas. On the left, is how it looks today. On the right, is how it looked March 23. pic.twitter.com/NIAML2RUJL

According to the outlet, more than 4,000 migrants in detention were seen crammed into "pods," each containing 500-600 people. Each pod should have a maximum of 32 participants, according to the rules.

​Earlier, a number of reporters and lawmakers took pictures of migrants crammed together in overcrowded facilities as officials struggled to process them at the Donna center, which has resulted in some of the most famous photos of the crisis so far.

I visited the southern border and the U.S. Customs and Border Protection Facility in Donna, Texas.

What I saw there was nothing short of a heartbreak.
1/8 pic.twitter.com/ek3ONj6a7W

​It's one of the measures taken by the Biden administration to deal with the influx. The Department of Health and Human Services reported earlier this month that an emergency intake center in Donna will be opened to house up to 1,500 adolescents near the Customs and Border Protection (CBP) center.

According to the statement, the additional capacity "is urgently needed to manage the increasing numbers" of migrant children." The platform is only meant to be temporary.

© AP Photo / Dario Lopez-Mills
Migrant families disembark from an inflatable raft that smuggled them into the United States by crossing the Rio Grande River in Roma, Texas, Sunday, March 28, 2021

The CBP announced the construction of a new temporary processing center for illegal migrants in Donna in early February, according to a statement from the authorities the new facility is "weatherproof, climate-controlled, and is expected to provide ample areas for eating, sleeping, and personal hygiene."

Since President Joe Biden took office in January and reversed some of his predecessor Donald Trump's hardline policies, the United States has been facing the steepest increase in illegal migration in years.

Customs and Border Protection data released on Thursday showed that border apprehensions in the United States increased by more than 70% in March.

Last Thursday, the Custom and Border Protection data revealed that US border apprehensions soared by more than 70 percent in March. The 172,331 migrant encounters recorded make up the highest monthly total in more than two decades, with the Biden administration on pace to top the previous annual record set in 2019 of over 977,000 apprehensions.

Among other things, Republicans have criticized the new administration for abolishing the Migrant Protection Protocols (MPP) and ending the construction of the wall at the southern border.