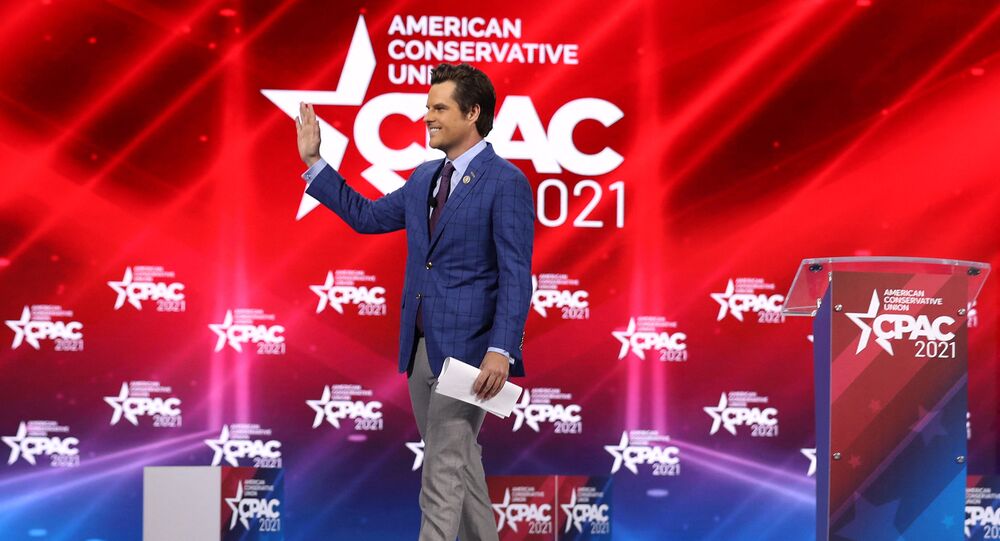 In late March, The New York Times reported that the US Department of Justice had launched a probe into Matt Gaetz's alleged sexual relationship with a 17-year-old girl, something that was vehemently rejected by the Florida Republican.

Republican Matt Gaetz showed photos and videos of women, who he claimed he had slept with to other lawmakers, СNN has quoted unknown sources as saying.

The Florida congressman is now being investigated by the Department of Justice (DOJ) over sex trafficking allegations, but it remains unclear whether the pictures are related to the DOJ inquiry.

"It was a point of pride", one of the sources said, referring to Gaetz and claiming that the 38-year-old talked about having sex with the women when showing their nude images on his mobile phone.

According to the insider, one of the videos showed a naked woman with a hula hoop.

The claims come as most of the GOP members interviewed by the news outlet Business Insider, remained tight-lipped about their support for Gaetz.

One of them described the Florida Republican as a "cancer on the party" and claimed that Gaetz's political agenda was just all about "getting more clicks".

The developments were preceded by The New York Times reporting late last month that the DOJ had opened an investigation into whether Gaetz had sex with a 17-year-old girl and paid for her to travel with him.

The inquiry was reportedly launched during the last months of the Trump administration, under former Attorney General William Barr. The probe is part of a larger investigation involving former Florida county tax collector Joel Greenberg, who was accused of sex trafficking last August.

Gaetz vociferously denies the allegations against him, claiming that he and his family are the victims of an extortion plot masterminded by a former employee of the Department of Justice, who demanded $25 million in exchange for making the sex trafficking charges go away.

"We have been cooperating with federal authorities in this matter and my father has even been wearing a wire at the FBI [Federal Bureau of Investigation]'s direction to catch these criminals", the 38-year-old earlier argued in a tweet.

© AP Photo / Pablo Martinez Monsivais
Underage Prostitutes, $25 million, US Hostage: Details Emerge About Matt Gaetz’ Alleged Extortion
In another tweet, Gaetz demanded that the DOJ release tapes from the investigation to shed light on the identity of the alleged extortionist. He also made it clear that he is not going to resign in connection with the DOJ probe.

Speaker Nancy Pelosi has, meanwhile, urged the House Ethics Committee to open its own investigation into the Florida Republican, adding that he may be subject to criminal penalties outside of Congress if the allegations against him prove to be true.