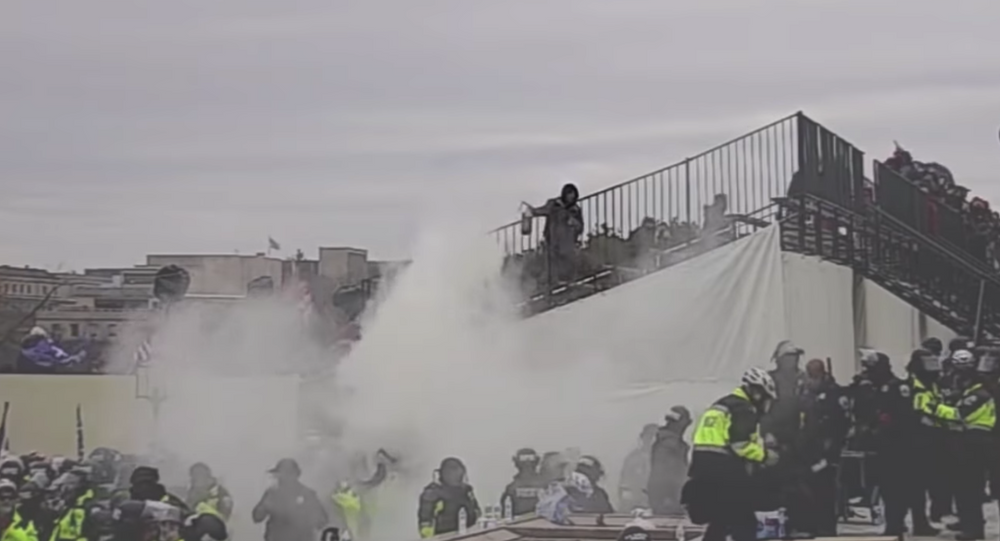 To date, law enforcement authorities have arrested hundreds of individuals who participated in the deadly January 6 insurrection, charging more than 65 rioters with assaulting federal officers. However, as investigators have continued to review various security images, many suspects remain unaccounted for.

The US’ Federal Bureau of Investigation (FBI) released multiple graphic videos on Thursday detailing the events that unfolded during the Capitol riot, in an attempt to identify 10 of the most violent suspects that remain at-large.

The 10 individuals who were filmed assaulting police officers at the Capitol grounds are seen doing so with a variety of weapons, including chemical sprays, clubs and a device similar to a cattle prod.

In one video, a man is seen using what appears to be using a baton-like stick to repeatedly strike an officer, before opting to fling the object directly at a group of authorities stationed at the Capitol. In another video, as a large trash bin is shot put toward officials, one rioter sporting a red “Make America Great Again” hat is seen swinging a large club at a line of police suited in riot gear.

In other cases, a few of the filmed rioters were caught using their fists to assault police, while some opted for spraying a type of chemical irritants on forces.

One of the more shocking videos released by the agency shows an individual using what is believed to be a cattle prod - an electric shock device similar to a stun gun instrument - to corner police.

The bureau explained in its Thursday release that the footage had been disclosed with the desire that the public could provide any valuable information regarding the whereabouts of the highlighted suspects.

“The FBI is asking for the public’s help in identifying 10 individuals suspected of being involved in some of the most violent attacks on officers who were protecting the US Capitol and our democratic process on January 6,” Steven M. D’Antuono, assistant director in charge of the FBI’s Washington Field Office, said in a statement accompanying the release.

“These individuals are seen on video committing egregious crimes against those who have devoted their lives to protecting the American people.”

“We know it can be a difficult decision to report information about family, friends, or coworkers, but it is the right thing to do, and the FBI continues to need your help to identify these suspects,” D’Antuono added.

In the wake of the Capitol siege, reports indicated that roughly 140 police officers were injured during the violent storming of the federal building. It’s believed the amount of injured officers is higher than reported, as many officials chose to forgo reporting their case to senior leadership.

The FBI release came days after authorities arrested two men for assaulting Capitol Police Officer Brian Sicknick, who later died after succumbing to injuries sustained while holding off rioters. At present, more than 300 rioters have been arrested for participating in the insurrection.