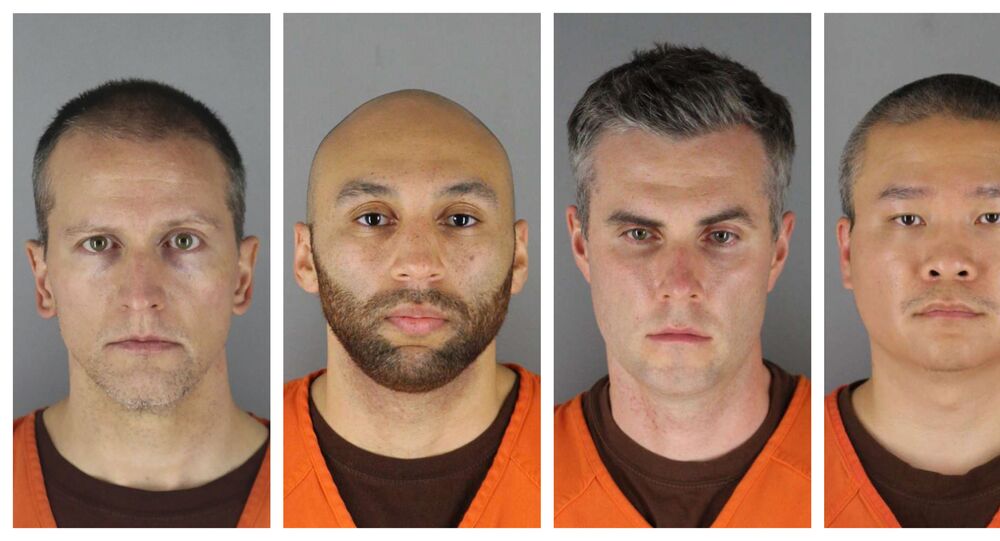 WASHINGTON (Sputnik) - A Minnesota judge on Thursday granted a request by prosecutors to add third-degree murder to the charges against former police officer Derek Chauvin in the killing of African American George Floyd.

"Murder in the third degree is reinstated as originally charged in this case," Judge Peter Cahill said in court. "This is not a decision as to the other three defendants who are set for trial at a later date."

There has been a dispute over the definition of third-degree murder which is referred to as an act "eminently dangerous to others" whereas Cahill said earlier that Chauvin's actions were dangerous only to Floyd and nobody else. However, prosecutors insisted on reviving this charge against Chauvin after the third-degree murder conviction of another Minneapolis policeman had been upheld in the case of the murder of an Australian woman in 2017.

© AP Photo / Matt Dunham
Protesters gather during a demonstration in Parliament Square in London on Wednesday, June 3, 2020, over the death of George Floyd, a black man who died after being restrained by Minneapolis police officers on May 25. Protests have taken place across America and internationally, after a white Minneapolis police officer pressed his knee against Floyd's neck while the handcuffed black man called out that he couldn't breathe. The officer, Derek Chauvin, has been fired and charged with murder. (AP Photo/Matt Dunham)

Floyd died on 25 May 2020 after Chauvin pressed his knee against Floyd's neck for about nine minutes. Floyd's death sparked mass protests against police brutality and racism across the US and in some other parts of the world.