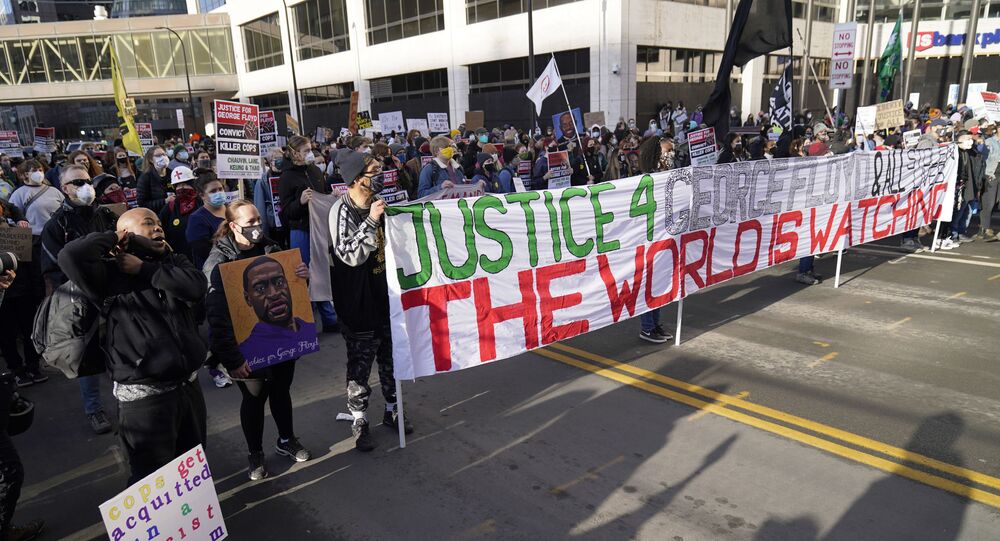 Hundreds of protesters are gathering outside a courthouse in Minneapolis awaiting the trial of Derek Chauvin, accused of murdering George Floyd. The first stage of the trial will be jury selection, which is a very convoluted process in the United States.

Hennepin County Judge Peter Cahill is expected to rule on whether the trial of Derek Chauvin can go ahead after prosecutors asked him to wait until an appeals court has ruled on whether a charge of third-degree murder should be reinstated.

When the trial does get under way Chauvin’s lawyers and the prosecution will both be trying to gain an early advantage during jury selection.

​Alan Tuerkheimer, a Chicago-based jury consultant, said: "The rationale behind jury trials is to ensure someone who stands accused has a jury of his or her peers to decide whether they violated the law as written or intended by the government. Much of how the jury system works here in the US stems from the premise that citizens should be a check on government power. Much of early evolution focused on criminal cases but there has been similar developments over the years in the realm of civil trials."

His company, Trial Methods Inc, works in both criminal and civil litigation and aside from jury selection advice it also offers "a glimpse into how jurors make key decisions and reveal biases that will affect the outcome” of trials.

​When it comes to the George Floyd trial, Mr Tuerkheimer explained: “The prosecution wants people wary of the Minneapolis police specifically and law enforcement in general. They want those who tend to assume the worst when hearing about the police. These jurors think there is a systemic problem with how police officers conduct themselves, not just a few bad apples.”

The defence, on the other hand, will want people who believe policing is a “noble and dangerous profession”, said Mr Tuerkheimer.

​"They want authoritarian types of who do not think cops use excessive force, look after each other, hide evidence, etcetera," he added.

When the jury selection process gets under way the state of Minnesota will get nine peremptory challenges and the defence will get 15.

Mr Tuerkheimer explained: "The imbalance again goes to the idea that in criminal cases when someone’s liberty (or life) is at stake the safeguards in place are to ensure the defence gets a fair trial."

A peremptory challenge is one in which a reason does not have to be given, although exclusion cannot be based solely on race, religion or gender.

​The judge will only become involved if one side accuses the other of striking out jurors in a discriminatory way - for example if the defence struck out a dozen black jurors, who might be presumed to be sympathetic to the prosecution.

Another thing both sides will be seeking to eliminate are so-called “stealth” jurors.

Mr Tuerkheimer explained: “A stealth juror is a prospective juror who attempts to make it onto a jury in hopes of attaining a pre-determined outcome in the deliberation. More often than not this juror will say very little during…and fly under the radar, or if they do speak, will tailor responses to convey they could be an entirely fair and impartial juror.”

​He said stealth jurors have an agenda and are hellbent on either conviction or acquittal, no matter what the evidence says, and are sometimes angling for a book deal or some other media-related reward for their time.

Many of the jurors may have seen Darnella Frazier’s video of George Floyd being arrested but Mr Tuerkheimer said: “While there will be jurors seated who have seen the video, the key for the defence is to decide whether a potential juror can put aside any pre-formed judgements about the video.”