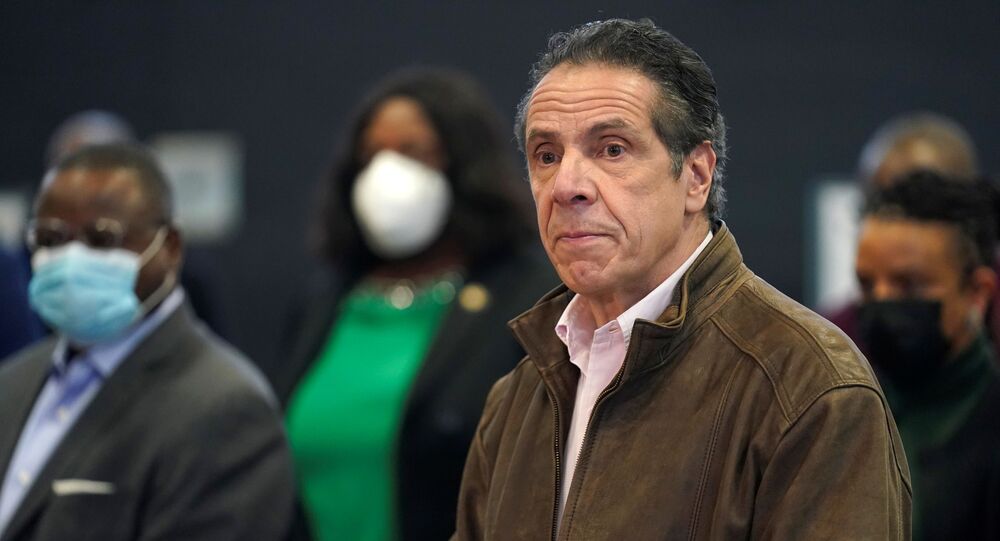 Earlier, New York state Governor Andrew Cuomo faced accusations of sexual harassment from a former aide. The allegations emerged amid calls to impeach Cuomo over a scandal around incorrectly reported data on COVID-19 fatalities in the state nursing homes.

A second former aide to Governor Andrew Cuomo has come forward to accuse him of sexual harassment, The New York Times reported on Saturday.

Charlotte Bennett, 25, an executive assistant and health policy adviser for Cuomo before leaving in November 2020, claimed that the governor harassed her last spring and early summer.

According to Bennett, the "most disturbing" episode occurred on 5 June, when she was alone with him in an office. Cuomo asked whether she thought age gaps were important for romantic relationships and if she “had ever been with an older man" - questions she interpreted as hints to engage in sexual relationship.

"I understood that the governor wanted to sleep with me, and felt horribly uncomfortable and scared,'' Bennett told the Times. "And was wondering how I was going to get out of it and assumed it was the end of my job.''

Bennett also said that Cuomo informed her that he was open to relationships with women in their 20s and questioned whether she was monogamous. She acknowledged that Cuomo never touched her.

The former aide informed Cuomo's chief of staff, Jill DesRosiers, about the interaction less than a week later, and was quickly transferred to another job within the adminstration.

Bennett did not to push for additional action in regard to her allegations, as she reportedly liked her new job and "wanted to move on." Her current decision to share her story now comes, according to The Times, due to an "obligation" she felt to other victims of sexual harassment and a desire to stand against the way Cuomo “wields his power.”

The governor's office issued a statement responding to the allegations, insisting that Cuomo never "made advances toward Ms. Bennett nor did I ever intend to act in any way that was inappropriate."

"The last thing I would ever have wanted was to make her feel any of the things that are being reported", the statement said.

The governor stated that he had initiated an independent review into the allegations, which will be conducted by a former federal judge, Barbara Jones.

"I ask all New Yorkers to await the findings of the review so that they know the facts before making any judgements,'' Cuomo said. "I will have no further comment until the review has concluded.''

The governor's special counsel, Beth Garvey, acknowledged that Bennett had complained about the interactions, and suggested that she had been transferred to a job that was more interesting to her.

Who Was the First to Accuse Cuomo of Sexual Harassment?

Bennett opened up to The Times after another Cuomo aide, Lindsey Boylan, accused him of kissing her when she did not want him to and making inappropriate comments.

For those wondering what it’s like to work for the Cuomo admin, read @LindseyBoylan’s story. https://t.co/PfWhTJgHuU

​According to Boylan, Cuomo suggested that they play strip poker as they were "flying home from an October 2017 event in Western New York on his taxpayer-funded jet."

“'That’s exactly what I was thinking,' I responded sarcastically and awkwardly. I tried to play it cool. But in that moment, I realized just how acquiescent I had become", Boylan said in her allegations.

Boylan has also claimed multiple interactions with the governor in which he complimented her, tried to remain one-on-one and made rude comments about other female employees. After Cuomo allegedly move to make an undesired kiss on the lips, she informed other staffers of her resignation in September 2018.

Cuomo's office has denied these allegations, and an investigation was kicked off.

The New York state governor is currently under fire for allegedly concealing data on incorrectly reporting the number of COVID-related fatalities in the state's nursing homes, with many calling for his impeachment.

Will Cuomo Survive and Does Trump Need a Disguise?