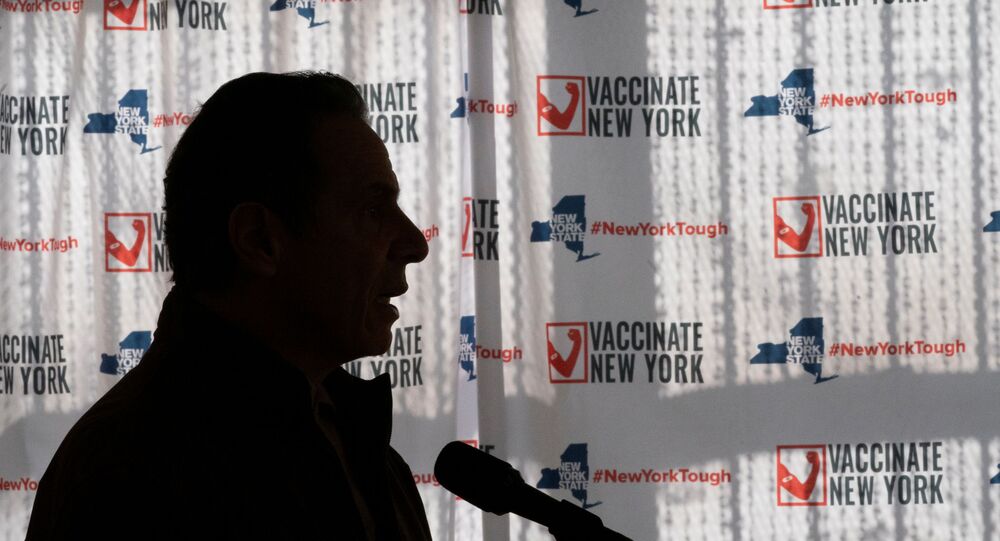 The New York state governor, Andrew Cuomo, is currently under harsh criticism for his handling of the deadly COVID-19 pandemic. A recently published report has showed that the number of coronavirus deaths in nursing homes was extremely underreported, and new accusations of sexual harassment against him have only thrown gas on the fire.

A billboard with the script “Impeach” in scarlet capital letters appeared in New York state on Saturday amid the ongoing scandal regarding the understating of the true numbers of coronavirus-related deaths in nursing homes in the state.

The billboard is the brainchild of Albany gun-store owner Brian Olesen, who is frustrated that no one has been held accountable to “defend these people that passed away and their families.”

“The purpose is to demand that he be held accountable for the mass deaths at the nursing homes. Our original message was ‘He lied, they died,’ but the billboard company rejected it,” he told The New York Post.

Recalling the recent sexual allegations, Olesen claimed that “people in this state have had it” and are intended “to seek this guy’s removal.”

Billboard just went up in Albany along 787 in sight of the Capitol pic.twitter.com/ZplwPU6I3U

After the billboard appeared earlier this week, New York Democratic lawmaker Ron Kim called for Cuomo to be impeached, accusing him of “obstruction of justice.”

Last month, New York Attorney General Letitia James issued a report depicting that the state's Department of Health had hidden as much as 50 percent of coronavirus-related deaths that occurred in nursing and senior care homes.

Cuomo is frequently excoriated for his approach to the deadly pandemic, as COVID-19 mortality rates among elderly patients around the state remain at high levels. In March 2020 he ordered that nursing homes in the state provide medical care for elderly patients with coronavirus symptoms although many of the facilities were not properly prepared, due to a lack of sufficient personal protective equipment and very few testing kits.