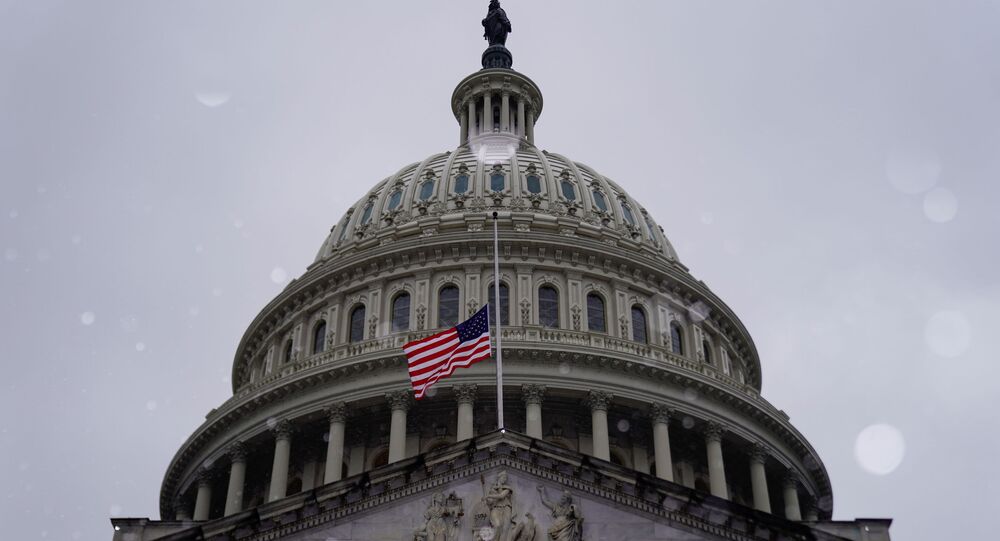 On 13 January, the US House of Representatives impeached the former US President Donald Trump for a second time following allegations from both Democrats and Republicans that his pre-protest speech from the White House lawn encouraged his supporters to storm the Capitol.

By day 4 of the impeachment trial that started on February 9 with senators acknowledging the process' constitutionality, prosecutors outlined their key arguments to condemn Donald Trump, adducing multiple videos to prove that the 6 January insurrectionists were encouraged by Trump, with the latter's defense team trying to prove that the former US president had nothing to do with the violence that swept across the Capitol building that day and led to the death of 5 people.

While the impeachment supporters' team, comprising congressmen Jamie Raskin, Ted Lieu, Joaquin Castro, Diana DeGette and Joe Neguse during the Wednesday and Thursday hearings claimed that the former president remains a threat - as he could allegedly cause “more violence" - spending around 13 hours on it, it took less than 3 hours from the defense team to wrap up their case.

Trump Did Not “Encouraged Lawless Behavior”

Starting the defense on the Friday hearing, attorney Michael T. van der Veen stressed that Trump’s pre-rally speech was questioning the integrity of the 2020 presidential elections, which “is not incitement to insurrection,” while Capitol protesters were “extremists of different stripes and political persuasions.”

“To claim that the president in any way wished, desired, or encouraged lawless or violent behavior is a preposterous and monstrous lie. In fact, the first two messages the president sent via Twitter once the incursion of the Capitol began were, ‘Stay peaceful and no violence, because we are the party of law and order,’” van der Veen said.

Trump lawyer Castor underlined that the former president in his speeches had been urging people to maintain “law and order.” He told the senators that prosecutors the day before had selectively edited video footage. Castor said that former president’s 6 January speech, cut by prosecutors on the words “you have to get your people to fight” while, according to Castor, what Trump meant was “if you can’t get your members of congress to do as you like them to do, you primary them.”

"President Trump said 'peacefully and patriotically make your voices heard' and the House managers took from that go down to the Capitol and riot." - Bruce Castor. pic.twitter.com/aNxcB1YUFD

Castor presented a Trump tweet sent hours after the deadly attack, saying “Please support our Capitol Police and Law Enforcement. They are truly on the side of our Country. Stay peaceful!"

In a closing remark, Castor told the Senate that “House managers, knowing it was not contested at all, chose to spend 14-plus hours showing pictures of how horrific the attack on the US Capitol was,” but failed to “legally connect” the attack to the former president, “which is the only question that needs to be answered.”

“President Trump’s words couldn’t have incited the riot at the Capitol... At 11.15 am police security camera videos show crowds forming at 1st Street near the Capitol Reflecting pool... Violent criminals were assembling at the Capitol over a mile away almost an hour before the President uttered a single word on the Ellipse. You didn’t hear that fact during the hours and hours of the House managers presentation, did you?” he said.

Answering to the House impeachment managers, who earlier recalled Trump’s “aggressive” rhetoric, the defense pointed to the difference between words and actions, arguing that some phrases people use figuratively.

"I am your President of law and order..." - President Trump. pic.twitter.com/w59lapLvjT

In a number of videos, played several times, the defense stated that many politicians and other public figures, including Speaker of the House Nancy Pelosi, US President Joe Biden, actor Johnny Depp and pop star Madonna.

Of particular note were numerous appeals of then vice president candidate Kamala Harris urging a fight, during her speeches and interview, including one where she said “The American people are going to have a fight.”

Play this during the impeachment.

In 2019 Kamala Harris gave a 13 minute. It was the usual, “Trump is bad man. He hates you.” She even went after conservative judges.

"That's okay. You didn't do anything wrong. It's a word people use. But please stop the hypocrisy," Schoen said.

Impeachment managers described the video compilations as “a complete false equivalence.” Senator Richard Blumenthal said the videos were a "distraction" from Trump "inviting the mob to Washington." As an aide to the House managers told The Hill, the Democrats’ comments used in the Trump defense video were “cut entirely out of their context.”

At the end, Castor characterized the impeachment as an attempt by Democrats to silence the free speech protected by the First Amendment and silence the voices of political opponents by criminalizing them.

“It’s about silencing and banning the speech the majority does not agree with. It’s about cancelling 75 million Trump voters and criminalizing political viewpoints. It’s the only existential issue before us. It asks for constitutional cancel culture to take over in the US Senate,” he said.

© REUTERS / POOL
Bruce Castor and Michael van der Veen, lawyers for Trump, walk back to their meeting room during a break through the Senate Reception room on the fourth day of the Senate Impeachment trials for former President Donald Trump on Capitol Hill in Washington, U.S., February 12, 2021. Jabin Botsford/Pool via REUTERS

The defense has rested its case, using almost three hours of its allotted 16. In the following several hours, senators questioned Trump's lawyers, as well as the US House impeachment managers concerning their arguments.

As the procedure was completed, the Senate voted to award a Congressional Gold Medal to Capitol Police Officer Eugene Goodman, who guided a mob of the violent Trump supporters away from the Senate chamber during the Capitol attack. The legislation marked the start of a respite before the final impeachment session.

The outcome of the case is likely to favor the former president, as a two-thirds majority with at least 17 Republicans is required in an evenly-split Senate to find Trump guilty.