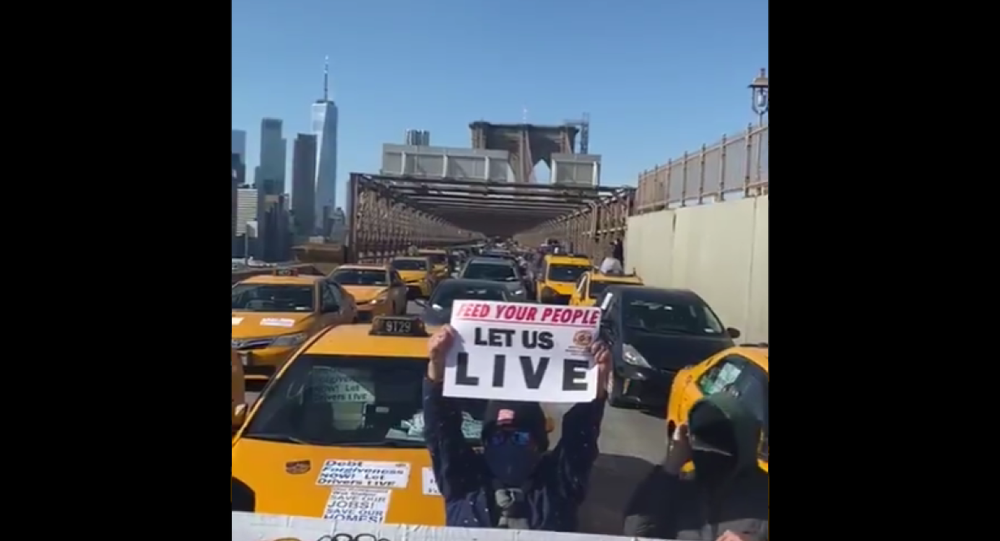 The rise of ride-hailing apps like Uber and Lyft, whose drivers do not have the same licensing requirements as professional taxi drivers, has helped cause the value of taxi medallions to collapse, plunging some drivers into debt.

“We shut down the Brooklyn Bridge because only direct action will get us what we need: medallion debt forgiveness now!” tweeted the New York Taxi Workers Alliance, a labor union representing some 21,000 professional drivers.

According to the New York Daily News, medallion debt became an increasing problem in the early 2010s after the rise of ride-hailing apps like Uber and Lyft undermined the professional taxi business. A taxi medallion is a permit to legally operate a taxi in the city - a method of controlling the industry’s size that has been implemented by many cities across the US, including New York City, which has over 13,000 distinctive yellow cabs.

The value of medallions has fallen from a high of over $1 million to $120,000 today, plunging between 3,000 and 5,000 taxi drivers into debt after they borrowed against the value of their medallions. The issue came into the national spotlight in 2019, after a string of suicides by indebted taxi drivers.

We shut down the Brooklyn Bridge because only direct action will get us what we need: medallion debt forgiveness now! pic.twitter.com/kmbQlBrOO3

Cabbies have taken the Brooklyn Bridge and are sending an SOS to Congress for help with medallion debt relief. pic.twitter.com/he43GUirG9

"Driver power, union power!" I was proud to stand in solidarity with the @NYTWA this morning as they demanded debt relief from the city. Their stories are heartbreaking - many have lost their homes, some have committed suicide. We must support these workers! pic.twitter.com/PuU7r08U46

​In addition to shutting down traffic on the bridge which spans the East River and connects Long Island and the island of Manhattan, taxi drivers paid a visit to the home of Sen. Chuck Schumer (D-NY), also the Senate majority leader. However, the lawmaker is currently in Washington DC, overseeing the second impeachment trial of former US President Donald Trump.

Cabbies cheer upon hearing that @SenSchumer has pledged his support for debt relief for NYC’s struggling taxi drivers. pic.twitter.com/G8mhEcAey4

Debt specialist Haywood Miller told the New York Times that many of the drivers who bought the expensive medallions were misled by the predatory practices of banks and private lenders.

“The whole thing was like a Ponzi scheme because it totally depended on the value going up,” he said. “The part that wasn’t fair was the guy who’s buying is an immigrant, maybe someone who couldn’t speak English. They were conned.”

With ridership down by at least 70% due to the COVID-19 pandemic, the financial screws are being turned on drivers all the harder.

On a city public radio show last week, New York Mayor Bill de Blasio said help for the drivers depended upon the city getting COVID-19 stimulus money from the federal government - a proposal lawmakers have been hammering out for months.

“If we get money from the Congress, I want to find a way to help these drivers,” de Blasio said. “I don’t have a specific proposal yet… But it hinges on getting the relief we need.”