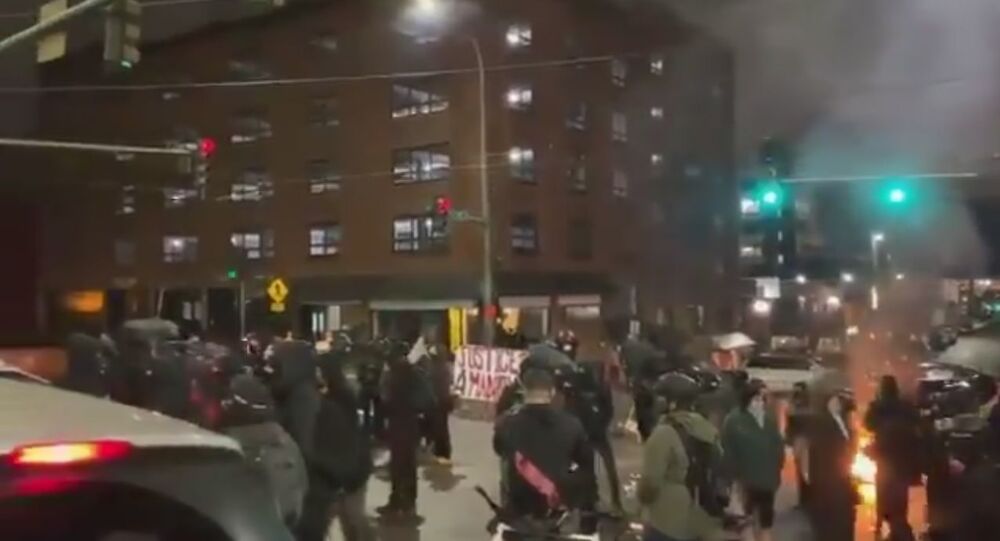 The crowd gathered near the intersection, where a police vehicle had run a person over the day before, responding to a reported street race.

Hundreds of protestors took to the streets of Tacoma, Washington on Sunday, shattering windows and tagging walls with spray paint. Police reported that three people appeared to try to get onto the roof of a building. Two of them were arrested and were found to be armed with a handgun and knives; one got away. The protest did not cause any injuries and it was cleared at around 11 pm.

While monitoring demonstration activity, witnesses observed 3 people in a secure bldg. in the 700 blk of Commerce St. trying to access the roof. Officers responded and arrested 2 people armed with a handgun and knives for Burglary 1st. The third subject is still outstanding. pic.twitter.com/HxdC8N865o

A group is on the ground in Tacoma this evening protesting TPD's actions last night. pic.twitter.com/Ooqel7urqx

Calling it a night from the Antifa riot in Tacoma. pic.twitter.com/ajqsmKdcxd

The protest was prompted by a video, widely shared online, of a police cruiser driving through a reported street racing crowd on Saturday night. Two people were injured and one person has since been released from hospital.

This is the police vehicle that ran through the crowd in downtown Tacoma tonight (car #2815). I was taking some photos as it was towed, to show that the windshield and passenger side are, to my eyes, completely unmarked. pic.twitter.com/feOEnhzYxs

Police identified the officer involved in the incident Saturday and placed him on paid administrative leave. According to the police, the officer had been surrounded by a crowd with people hitting the body of the cruiser, and the officer feared for his safety. The officer drove forward through the crowd, and then stopped and called for medical aid.

The protests come just days after Antifa rioters gathered in the central streets of Seattle and Portland to protest the presidential inauguration of Joe Biden by burning flags, smashing windows and destroying property. Portland police reported that a group of approximately 200 rioters targeted the city's Democratic Party of Oregon office, defacing it with anarchist symbols and slogans.