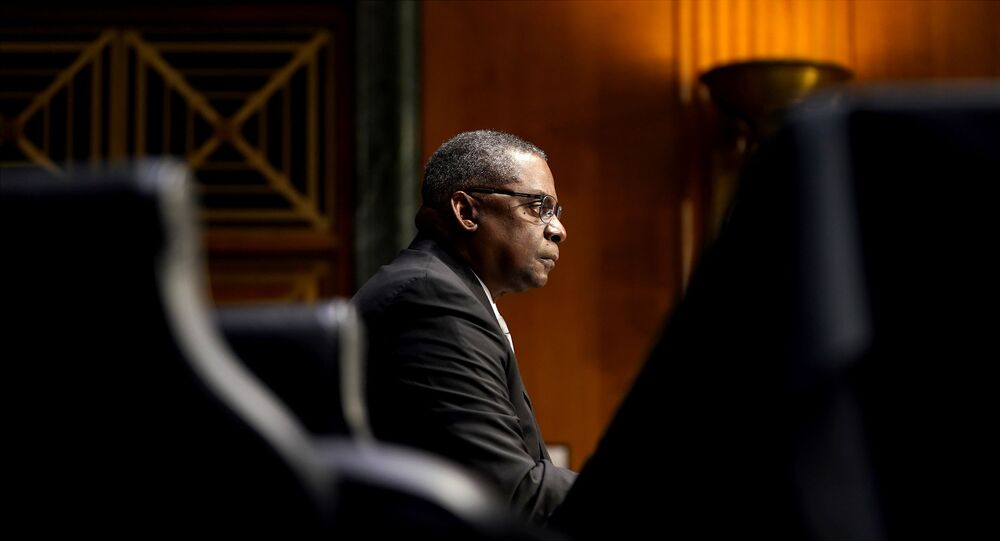 The confirmation hearing for Gen. Lloyd Auston, President-elect Joe Biden’s pick to head the Pentagon, took place before the Senate Armed Services Committee on January 19, one day before Biden’s inauguration.

Austin also said he would review current troop deployments in the Middle East and hinted at a reduction of US forces in the region, stating that “we can better calibrate” the American presence and provide “opportunities to employ the force in other theaters,” Bloomberg reported.

"If confirmed, I will review our force presence to ensure it is properly balanced to address the broad range of challenges in the Middle East - including from China and Russia - with global requirements and the health of the joint force," Austin said in a written statement to the US Senate.

'We View China as Our Most Serious Global Competitor'

When asked whether the US National Defense Strategy (NDS) should be revised, Austin responded that the pace at which China is modernizing its military modernization, its “increasingly aggressive actions in the Indo-Pacific and its ability to threaten the US Homeland are concerning and must be continually reexamined.”

Austin added that he would ensure China does not gain military superiority over the United States.

“Across much of the Indo-Pacific region, the Chinese Communist Party (CCP) is using military and economic coercion to bully its neighbors, advance unlawful maritime claims, threaten maritime shipping lanes, and destabilize territory along the periphery of the People’s Republic of China (PRC). This predatory conduct increases the risk of miscalculation and conflict. The United States stands with its Southeast Asian allies and partners to champion a free and open Indo-Pacific,” the US Department of State wrote on its website.

In a written submission to the Senate committee, Austin also revealed that given the “ascent and the scope and scale” of China’s military modernization, the Biden administration “will view China as our most serious global competitor and, from a defense perspective, the pacing threat in most areas,” Bloomberg reported.

The US has repeatedly accused China of military aggression in the Indo-Pacific region.

Extension of New START Treaty With Russia in US Interests

Extending the New Strategic Arms Reduction Treaty (New START) with Russia is in the national security interest of the United States, Austin said.

Biden to Examine US Troop Withdrawal From Germany

According to Austin, the incoming Biden administration will review the decision to withdraw a significant number of US troops from Germany.

"President-elect Biden pledged a comprehensive review of our global military posture relative to the threats we face and, if confirmed, I look forward to leading that effort and examining how that posture should change over time. While I have not yet fully reviewed our deterrent posture in Europe, I believe it must be a part of this review. If confirmed, I will also want this review to examine the Trump Administration decision to withdraw significant numbers of US troops from Germany," Lloyd said during his confirmation hearing on Tuesday.

In addition to that, Austin said he supports the provision in legislation to provide lethal assistance to Ukraine.

"I support the provision of lethal assistance to ensure Ukraine has the equipment it needs to defend itself," Austin said in the testimony on Tuesday. "Ukraine also has critical non-lethal requirements, such as secure communications equipment, that is funded through the Ukraine Security Assistance Initiative (USAI). There is currently a good balance of lethal and non-lethal assistance to meet Ukraine’s capability needs."

The Senate Armed Services Committee also pressed Austin on cyber security, including the latest cyber attack against IT company SolarWinds. Austin said Russia should be held responsible if found to be the culprit behind the recent cyber intrusion.

"I really look forward to understanding with clarity what really happened. The FBI, the NSA [National Security Agency] have given Russia credit for this. They have attributed this activity to Russia and if that's the case, I think Russia should be held accountable. That's my personal belief," Austin said Tuesday.

The cyberattack exposed private data from companies and government agencies, including thousands of emails from the US Department of Justice (DoJ).

In a statement last month, US Secretary of State Mike Pompeo claimed that Russia was "pretty clearly" responsible for the hack.

However, Kremlin spokesman Dmitry Peskov has denied the allegations.

"This talk [of cyberattacks] has nothing to do with us, because Russia is not involved in such attacks generally, including this one specifically. We state this officially and decisively. Any accusations of Russia's involvement are absolutely unfounded and are a continuation of the kind of blind Russophobia that is resorted to following any incident," Peskov said in a briefing last month, Sputnik reported.