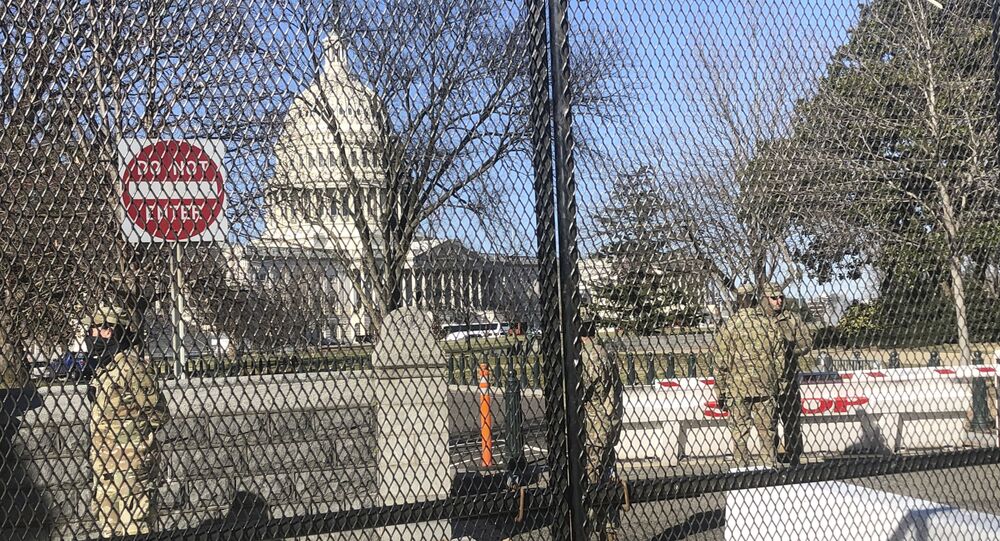 On Monday, the Federal Bureau of Investigation revealed that armed protests were being planned at all 50 US state capitols in the days leading up to President-elect Joe Biden’s inauguration on 20 January.

US officials are tightening security measures in Washington and across the country as the clock is ticking to the inauguration of President-elect Joe Biden.

This comes after violent events in the US capital on 6 January, when thousands of President Donald Trump’s supporters breached the Capitol, trying to stop the Senate from certifying the 3 November election results. The riots claimed the lives of at least five people.

© REUTERS / Allison Shelley
National Guard troops stand watch on the grounds of the US Capitol building on Capitol Hill in Washington, U.S., January 10, 2021.

The National Park Service has already closed the Washington Monument and the grounds of the Capitol have been closed for visitors, with DC Mayor Muriel Bowser urging the service to deny all demonstration permits in the run-up to Biden’s inauguration.

Earlier, Bowser urged the US Homeland Security Department to "adjust its approach to the inauguration in several specific ways", asking to extend the National Special Security Event period to run from 11 to 24 January and requesting a pre-disaster declaration.

In another development, President Donald Trump approved an emergency declaration for Washington, DC ahead of the 59th presidential inauguration, which will remain effective through 24 January.

The Pentagon has, in turn, authorised up to 15,000 National Guardsmen from across the country to be deployed to Washington to support law enforcement before and during the inauguration of Biden.

© REUTERS / JOSHUA ROBERTS
Members of the National Guard move boxes of food at the U.S. Capitol as Democratic members of the House prepare an article of impeachment against U.S. President Donald Trump in Washington, U.S., January 12, 2021

"The President's action authorizes the Department of Homeland Security, Federal Emergency Management Agency (FEMA), to coordinate all disaster relief efforts which have the purpose of alleviating the hardship and suffering caused by the emergency on the local population, and to provide appropriate assistance for required emergency measures, [...] to save lives and to protect property and public health and safety, and to lessen or avert the threat of a catastrophe in the District of Columbia", the White House said in a statement.

A spate of states has, meanwhile, introduced emergency measures, including Michigan, where the open carrying of firearms inside its state capitol was banned; in Wisconsin, the National Guard was activated in order to support capitol police.

California Governor Gavin Newsom, for his part, said that local authorities were “on high alert” for possible protests in Sacramento in the coming days, and that the National Guard would be deployed if necessary.

The measures come amid reports about an internal memo from the Federal Bureau of Investigation (FBI), which revealed that officials had been made aware of armed protests being planned at all 50 state capitols across the US, including the US Capitol, in the days ahead of the inauguration.

#USA will deploy 15,000 #USArmy servicemen to provide security prior to presidential #inauguration in #Washington DC.

At the same time it's many more than they have in #Iraq and #Afghanistan in total... #Capitol #Americans #Biden pic.twitter.com/64hp3GBB7d

The FBI bulletin indicates that agents received information that also detailed that an unidentified group was calling for the “storming” of state, local, and federal courthouses if Trump were to be removed from office before Inauguration Day. Administrative buildings were also considered targets, according to the FBI.

"The FBI received information about an identified armed group intending to travel to Washington, DC on 16 January. They have warned that if Congress attempts to remove POTUS via the 25th Amendment, a huge uprising will occur”, the memo states.

The FBI, in turn, said in a statement that its focus is “not on peaceful protesters, but on those threatening their safety and the safety of other citizens with violence and destruction of property”.

Reports of the FBI bulletin came as House Democrats introduced a single article of impeachment against Trump for "incitement of insurrection" in the wake of the deadly Capitol siege.

© REUTERS / LEAH MILLIS
Trump Reportedly Admits 'Some Blame' for Capitol Mayhem
The article itself stemmed from remarks made by Trump at the “Stop the Steal” rally, when he called on his supporters to keep fighting to prevent the presidential election from being “stolen”.

The impeachment article was introduced in the lower congressional chamber after House Republicans blocked a request by Democrats to unanimously pass a resolution calling on US Vice President Mike Pence to invoke the 25th Amendment to remove Trump from office.

During the Capitol unrest on Wednesday, the US president took to his now-suspended Twitter account to call for the protesters to disperse, and to say that "we have to have peace". In a subsequent video message, Trump vowed to ensure "a smooth, orderly, and seamless transition of power" in the country.

Twitter Divided on Whether Chuck Norris Participated in Storming of Capitol