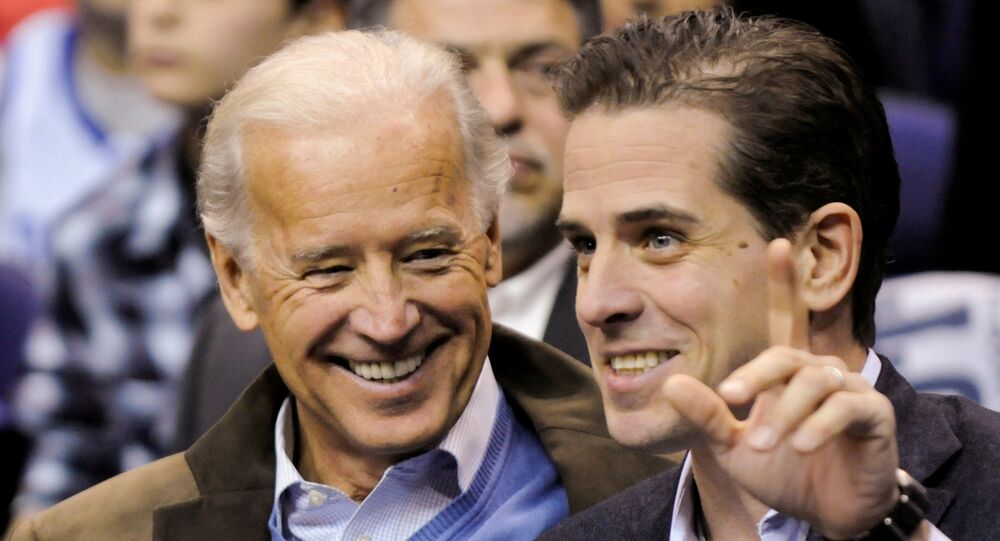 The president-elect's son became the centre of a major political scandal in the US, with his work for a Ukrainian energy company prompting Republicans to accuse him of running a pay-to-play scam during the Obama years, and Democrats accusing Donald Trump of illegally trying to get dirt on Joe Biden by asking Kiev to reopen a probe into the matter.

Outgoing US Attorney-General William Barr has indicated that he will not be appointing a special counsel to investigate Hunter Biden before stepping down.

"To the extent that there's an investigation, I think it's being handled responsibly and professionally currently within the department and to this point I have not seen a reason to appoint a special counsel and I have no plan to do so before I leave," Barr said, speaking to reporters at a press conference in Washington, DC on Monday.

President Trump announced that Barr would be resigning from his office last week, saying he would "be leaving just before Christmas to spend the holidays with his family" and commending him for doing "an outstanding job" as attorney-general. Barr will step down on 23 December.

Hunter Biden is at the heart of a major political scandal in the US, with Donald Trump's efforts to convince Ukraine to reopen a probe into the 50-year-old's lucrative no-show job for Ukrainian energy company Burisma between 2014 and 2019 prompting Democrats in Congress to launch a campaign to impeach him on charges of abuse of power and obstruction of Congress. Trump was impeached by the Democrat-controlled House of Representatives in December 2019, but acquitted by the Senate in February 2020.

The Biden saga then spilt over into the 2020 election, with Republicans accusing Hunter Biden of running a much broader 'pay-to-play' scheme selling access to his vice-president father during the presidency of Barack Obama in exchange for cash after a laptop purportedly belonging to him and containing files detailing potential illegal activity was discovered at a Delaware computer repair shop and turned over to the FBI. According to the New York Post, which broke the laptop story, Hunter took money from a broad range of characters from around the world, including Chinese businessmen and officials, Elena Baturina, Russia's richest woman, and others.

© AP Photo / Pablo Martinez Monsivais
Joe Biden Will Not Discuss Son Hunter With Attorney General Candidates, Jen Psaki Says
In September, the US Senate Committee on Homeland Security and Governmental Affairs issued a report which appeared to confirm the veracity of media reporting on the subject, while indicating that the Biden family's conduct had been raised repeatedly in 2015 by other Obama administration officials expressing concerns about potential conflicts of interest.

On 9 December, Hunter Biden announced that his tax affairs were being investigated by the US attorney for the District of Delaware, and said he was confident that he would be cleared of any wrongdoing.

Trump has repeatedly criticised Attorney-General Barr for his perceived lack of action on the Hunter Biden case, and suggested that the president-elect's team would seek to "quickly kill" any investigation after coming into office.

Despite the explosive nature of the allegations and the serious criminal penalties potentially involved, most mainstream US media ignored the Biden story ahead of the 3 November vote, with online social media giants Facebook and Twitter seeking to limit its sharing, prompting Republicans to scream 'bias'.