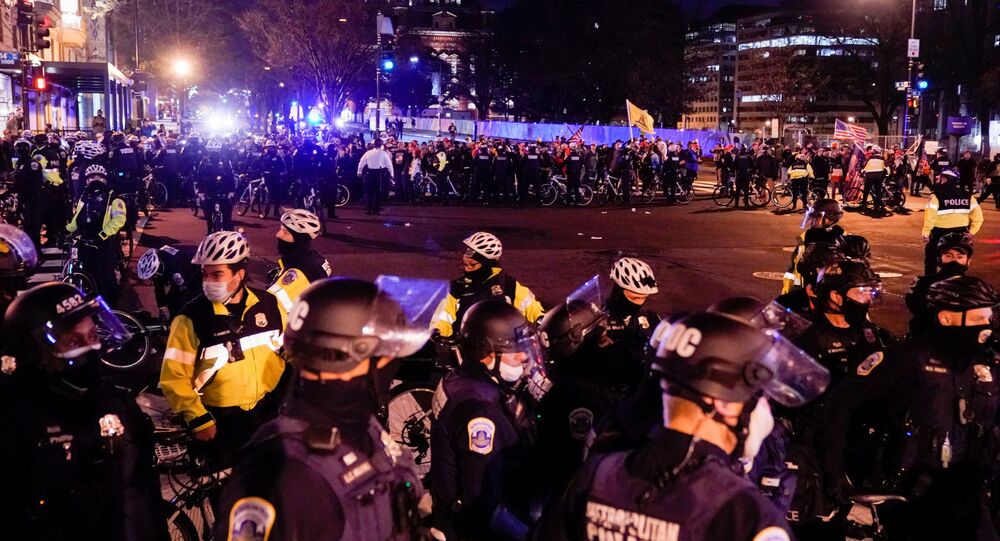 Clashes erupted between supporters of the Proud Boys and Black Lives Matter activists in Washington DC at the second Million MAGA March.

The demonstration in D.C. was one of the many held by Trump supporters across the nation on Saturday. In some locations, they were confronted by anti-Trump demonstrations, and while the police strove to keep them separated during daytime, the confrontation reportedly escalated into clashes after sunset.

According to the report, citing D.C. fire spokesman Doug Buchanan, four people were stabbed and hospitalized, possibly with life-threatening injuries.

​Citing local police, the newspaper said that the total number of injured people was eight, including the four stabbing victims and two police officers. Two more people were found lying on a sidewalk and picked up by ambulances, according to the report.

​At least 23 people were arrested after the rally, and at least eight people have been taken to hospital, Fox 5 DC reports, citing the office of Mayor Muriel Bowser.

​According to preliminary data from the mayoral office, people involved were arrested for six assaults on a police officer, 10 counts of simple assault and four counts of rioting.

​Law enforcement personnel had declared a riot at around 1.30 pm Saturday, after the demonstrators began to clash.

On Saturday, US President Donald Trump’s supporters and opponents held duelling rallies in Washington, DC with mobile police units crisscrossing the city in an attempt to separate the parties.

Earlier, thousands of protesters gathered in the US capital after the Texas lawsuit to overthrow the election results in four states, Pennsylvania, Michigan, Georgia and Wisconsin, was rejected by the US Supreme Court.

The MAGA (Make America Great Again) march, the second one after the November election, attracted thousands of Trump supporters.

The first MAGA-march held in the US capital a month ago resulted in numerous altercations and at least 20 arrests.