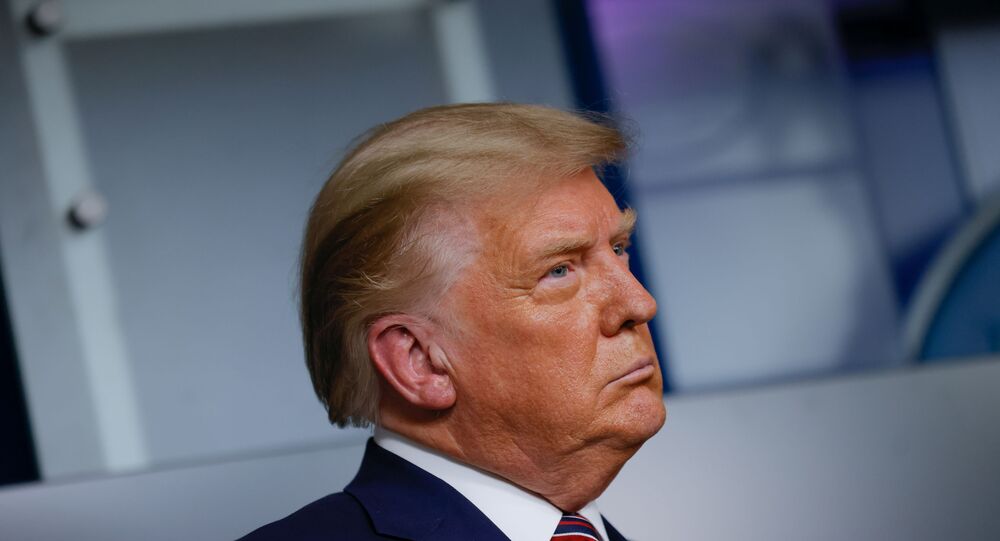 Trump's legal team argued to Pennsylvania senators that there were too many irregularities in the presidential election for them to certify that Democrat Joe Biden won the state - and urged them to consider a second election or even declare President Donald Trump as the winner.

US President Donald Trump was greeted with applause and cheers as he testified to the Pennsylvania state Senate hearings on the disputed election results in the state.

Trump's legal team, led by former New York City mayor and attorney general Rudy Giuliani, presented evidence to state senators in the city of Gettysburg. They argued that the legislature should not certify the results of the November 3 election due to numerous alleged irregularities.

In a wide-ranging ten-minute contribution, the president insisted - to applause from the room - that Joe Biden's Democrats "cheated" in the election, citing incidents of mail-in votes requested for dead citizens and others turning up to polling stations only to be told they had already voted my mail without their knowledge.

"We have to turn the election over," Trump said. "This election was rigged and we can't let that happen. We can't let it happen for our country. And this election has to be turned around, because we won Pennsylvania by a lot and we won all these swing states by a lot."

Trump had intended to appear in person, but pulled out after a campaign advisor tested positive for COVID-19.

Earlier, testimony from a witness for Trump's team drew audible gasps and laughter from the panel and audience when he presented data showing early-morning "spikes" of votes in the Pennsylvania results, totalling 604,000 over just 90 minutes, after the close of polls on November 3 - with almost 600,000 for Biden and only 3,200 for Trump.

And a Republican Party certified poll watcher testified to how he was denied access to the count in Philadelphia by masked, unidentified officials.

​Trump Attorney Jenna Ellis told senators they had many options, including calling a second special election or even directing the state's 20 electors to cast their votes for Trump in the electoral college that decides the presidency. But she insisted that they could not ignore the evidence presented and "certify a corrupted and irredeemably compromised election."

Trump's hopes of overturning the result are looking increasingly slim after a recount in Georgia failed to change the result - despite the discovery of more than 5,000 uncounted votes in just two counties. And the Michigan board of canvassers certified a win for Biden on Monday, despite controversy over more more votes being cast than there were registered voters in over 70 per cent of the precincts in the city of Detroit.

Republicans hold a majority in both houses of the Pennsylvania General Assembly, just as they do in the legislatures of the key swing states of Arizona, Georgia, Michigan and Wisconsin.

© REUTERS / JOSHUA ROBERTS
Biden Says Trump Administration's Outreach on Transition Process Has Been 'Sincere'
Under Article 2 of the US constitution, it is up to state legislatures to appoint their allotted number of electors to the electoral college that chooses the next president - although they must abide by the popular vote in their state. But calling the election results into question may give legislators constitutional leeway to choose electors along partisan lines  - an unprecedented step.

However, if enough states where Biden has been declared the winner refuse to choose electors for either candidate, then Trump might emerge the winner.

If the electoral college is tied, then the Congressional House of Representatives decides the outcome, with each state's representatives voting en bloc with one vote per state. Republicans currently hold the majority of House seats in 26 of the 50 states, and Trump's Vice President Mike Pence would hold the deciding vote in case of another tie.