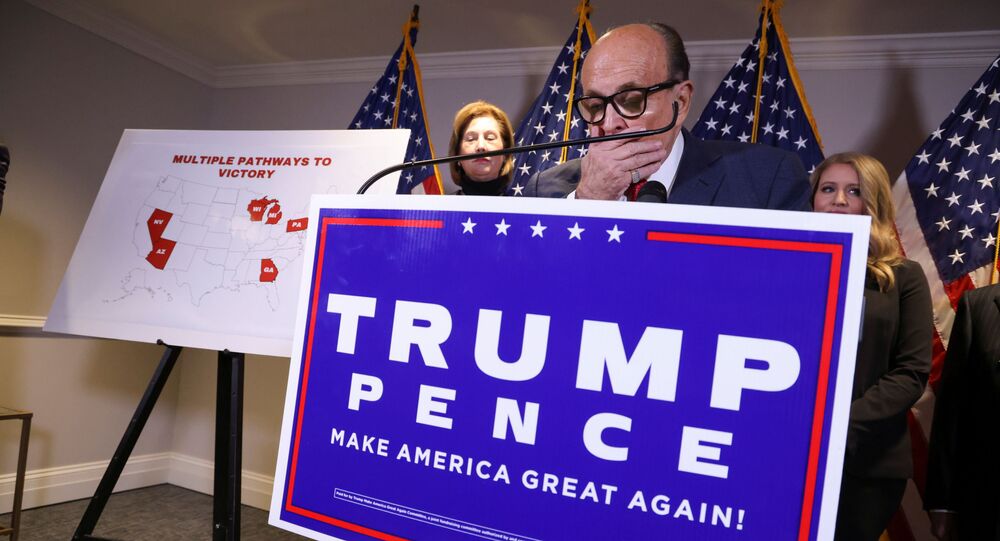 Sidney Powell was among those lawyers who supported Trump in filing lawsuits attempting to challenge the projected results of the US election that saw Joe Biden as the winner and claiming "massive election fraud". Over the weekend, she vowed a "biblical" revelation of the Trump allegations of election fraud in Georgia.

The Trump campaign on Sunday stated that Sidney Powell is not a member of the Trump legal team and is not a lawyer for the president.

"Sidney Powell is practicing law on her own. She is not a member of the Trump Legal Team. She is also not a lawyer for the president in his personal capacity", Trump campaign senior legal adviser Jenna Ellis and a Trump attorney, Rudy Giuliani, said in the statement.

​Earlier in November, however, Trump tweeted that Powell was part of "a truly great team" that was set to defend "OUR RIGHT to FREE and FAIR ELECTIONS".

I look forward to Mayor Giuliani spearheading the legal effort to defend OUR RIGHT to FREE and FAIR ELECTIONS! Rudy Giuliani, Joseph diGenova, Victoria Toensing, Sidney Powell, and Jenna Ellis, a truly great team, added to our other wonderful lawyers and representatives!

On Saturday, Powell spoke to Newsmax, doubling down on claims that Venezuela, and particularly its late president, Hugo Chavez, were involved in voter fraud in the 2020 election. She also said that the Trump campaign was in the process of preparing a new lawsuit in Georgia regarding "election fraud", touting "biblical" revelations.

“Hopefully this week we will get it ready to file, and it will be biblical,” Powell reportedly said, adding without evidence that "Georgia is extremely bad. We’ve got ballots being shredded, ballots being thrown out in trash bags, lying by people working in the centre, the votes being switched, the algorithms being run. You name the manner of fraud and it occurred in Georgia".

After Joe Biden was projected by the US mainstream media to win the election, the Trump team filed multiple lawsuits demanding to stop counting what it described as "illegal votes" in several states, including Georgia.

Following a recount in the Peach State, the Trump team demanded a second recount, slamming the first one, certified on Friday, as a "meaningless tally" and declaring that it still had "illegal votes" counted.

According to an official announcement by Georgia State Secretary Brad Raffensperger, the hand audit recount of ballots reaffirmed the victory of Joe Biden in the state.

Sidney Powell also appeared with the members of the Trump legal team at a Thursday press conference in which the campaign introduced a "multiple pathways to victory" mission statement. During that presser, she alleged that Dominion voting machines were created at the direction of Venezuela's late president, Hugo Chavez, and claimed that the Trump campaign would soon produce a "witness" to explain how the system worked during the 2020 US election.