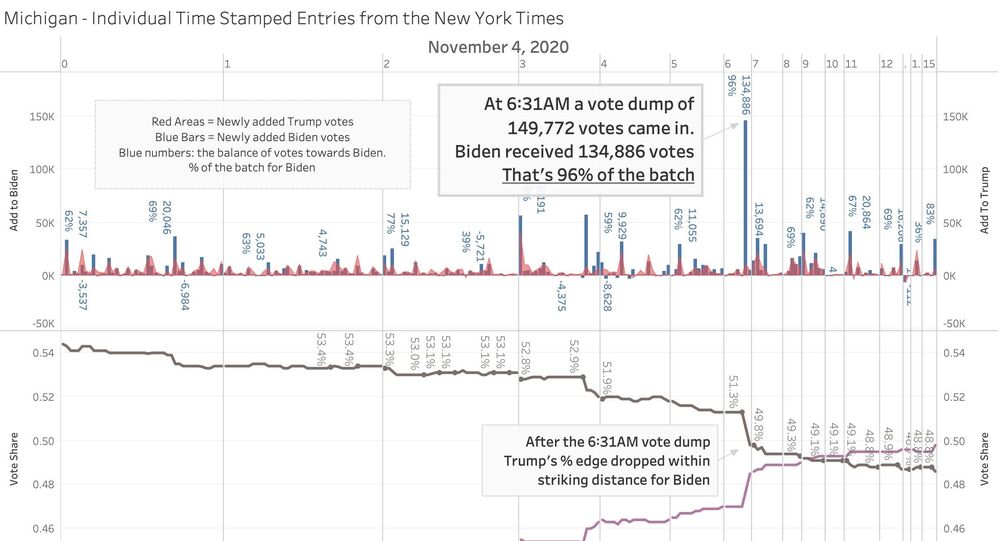 The Trump campaign presented some of its evidence of suspected election fraud on Thursday, accusing authorities in major Democratic Party-run cities in Pennsylvania, Michigan, Georgia, Arizona, New Mexico, Wisconsin and Nevada of large-scale machinations involving mail-in ballots. Democrats and most US media have dismissed the claims.

Donald Trump has made new allegations in support of his theory about major irregularities taking place following the November 3 election, linking to and retweeting a series of tweets by data analyst Justin Hart on alleged mass vote dumping in Joe Biden’s favour in key battleground states.

“Will use these charts in court case. The Election was a HOAX,” Trump tweeted Friday morning, offering a “thank you” to Hart for his data.

Will use these charts in court case. The Election was a HOAX. Thank you Justin! https://t.co/9Ue7ysDIVb

In a chart on election results in Michigan using what he maintains are individual time stamped entries of data from the New York Times, Hart points out that as the morning of November 4 wore on, Trump’s share of the vote in the state gradually dwindled from nearly 55 percent to less than 49 percent, with a large-scale vote dump of 149,772 votes observed at 6:31 am, 134,886 of them (or 96 percent) going to Biden.

A day earlier, Trump tweeted another chart by Hart featuring a similar phenomenon supposedly observed in Wisconsin, with the data, again based on individual time-stamped entries from NYT, showing Trump leading Biden by over 50.9 percent for most of the night before a vote dump at 3:42 am gave Biden a 143,379 vote boost, leading to a virtual tie.

Look at this in Wisconsin! A day AFTER the election, Biden receives a dump of 143,379 votes at 3:42AM, when they learned he was losing badly. This is unbelievable! pic.twitter.com/nhiLMmyHBn

“Look at this in Wisconsin! A day AFTER the election, Biden receives a dump of 143,379 votes at 3:42 am, when they learned he was losing badly. This is unbelievable!” Trump wrote in the earlier tweet.

Major US media have projected both Michigan and Wisconsin with their combined 26 electoral votes to have gone to Biden, with the Democrat candidate reportedly edging out Trump from 50.6 to 47.8 percent in the former and 49.6 to 48.9 percent in the latter, with a margin of victory of 155,629 votes and 20,608 votes, respectively.

Twitter flagged Trump’s Friday morning tweet as a “claim about election fraud [which] is disputed". The data used by Hart has yet to be independently verified. Hart is a self-styled data analyst and information architect and contributor to Rational Ground, a Covid-related information project.

Despite the 3 November election having taken place more than two weeks ago, Trump still refuses to concede to Biden, with his campaign lawyers accusing leaders in Democrat Party-run cities in key battleground states of carrying out a co-ordinated, “centralised” campaign of voter fraud. On Thursday, Trump lawyer Rudy Giuliani told reporters in Washington that his team had amassed “hundreds of witnesses” and nearly a dozen sworn affidavits testifying to voting irregularities, lack of proper election monitoring, particularly involving mail-in ballots, as well as alleged coaching of election officials.

Wiki Commons/DHS
Ousted Election Security Chief Calls Giuliani Presser ‘Most Dangerous’ Television in US History
Biden, Democrat leaders and most US media, as well as some Republicans, have dismissed the Trump campaign’s fraud claims, accused him of undermining democracy, and urged him to concede immediately.

Trump railed against mail-in ballots for months in the lead up to the election, describing them as “out of control” and “a disaster” and claiming they were easier to steal, forge, or alter than registered absentee ballots and votes cast in person. In September, senior Democrats accused him of seeking to undermine faith in the democratic process and of using mail-in votes as a pretext to try to stay in power after he refused to guarantee a smooth transition of power.