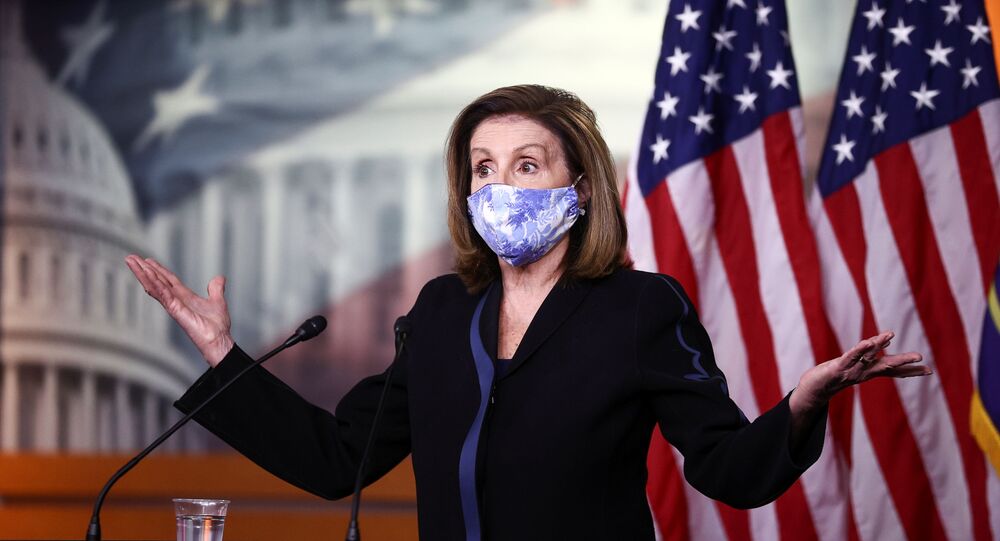 The House Speaker's office defended her "soiree" with Democrats and the GOP, saying that it has been specifically designed to be held in a "socially-distanced manner", so there is no need to cancel the event.

Nancy Pelosi is organising "respective dinners" in the Capitol for new members of Congress, an NBC correspondent shared on Friday.

The reporter said the room for the fancy parties is "very spaced" and thoroughly ventilised, hinting there should be no fears about safety due to the COVID-19 pandemic. She attached a picture of the fancy hall, which became viral on Twitter, triggering a lot of criticism towards the House Speaker and lawmakers in general.

.@SpeakerPelosi told me it’s safe. “It’s very spaced,” she said and there is enhanced ventilation and the Capitol physician signed off. pic.twitter.com/ZXjf72lnrP

Twitter users were apparently not convinced by her words, expressing concerns as to whether it is indeed safe to hold such events during the pandemic, while most of the netizens accused government officials of hypocrisy, especially those Americans who say they have been strictly following coronavirus restrictions.

I haven't seen my parents in a year and likely won't anytime soon, yet this is ok? Hey government leaders: please lead by example and sacrifice like you are asking the rest of the American people to right now.

Signed, someone who missed his father's funeral.

Others pointed out that while citizens are advised to comply with more strict safety measures given the rising infections nationwide, lawmakers are free to host parties. Someone even hinted that this was not the first time the House Speaker would neglect federal health guidelines. In early September, Pelosi was spotted getting a wash and a blow-dry at a hair salon without a mask, while beauty services were supposed to be closed to the public at the time.

"Imagine telling families not to hold Thanksgiving (we shouldn't) and then doing this. Come. On.", one user noted sarcastically.

Why, Nancy did. Of course. pic.twitter.com/B2a6QqerQq

Signed, someone who missed his father's funeral.

The daughter of ex-State Secretary Hillary Clinton, Chelsea Clinton, has also called for the House to cancel the event out of safety concerns.

Pelosi's office responded to the criticism, justifying the event by saying that everything Pelosi is doing is in accordance with the guidance of the Office of Attending Physician, and the upcoming dinner is not an exception.

"Our office strictly follows the guidance of the Office of Attending Physician, including for this dinner. To be a further model for the nation, this event has been modified to allow Members-elect to pick up their meals to go in a socially-distanced manner",

The news comes as state governors one by one are re-imposing coronavirus-induced restrictions. The new measures, already effective in California, Washington, and Oregon, prohibit get-togethers of more than three households and warn against hosting guests at home, meaning Thanksgiving this year won't be as festive as usual.