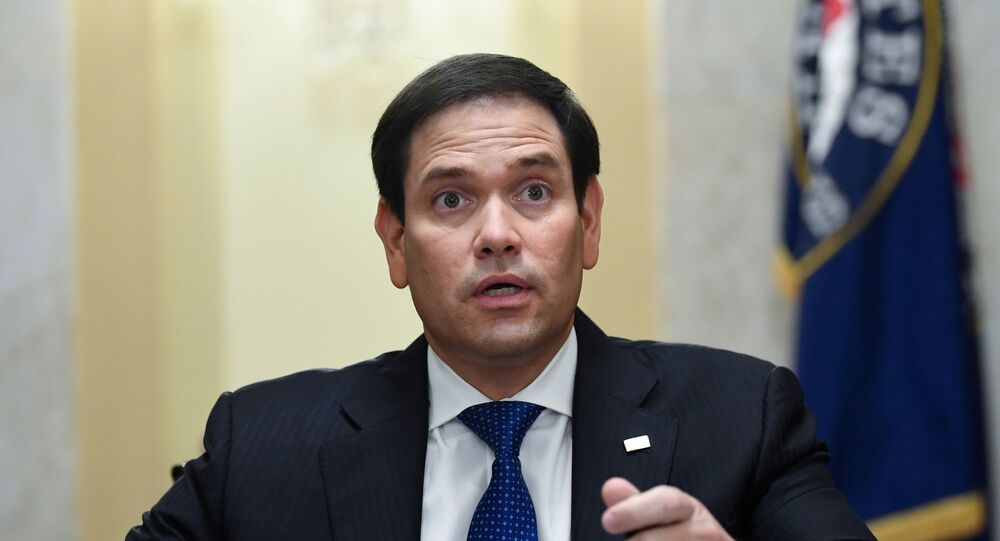 ‘We Don't Want You, Marco’: US Republican Lawmaker Clowned for ‘Blue Wave’ Tweet

As voter data continues to pile in, US Sen. Marco Rubio (R-FL) argues that Republican voters in his home state of Florida will lead a wave to reelect US President Donald Trump. However, netizens say the potentially historic GOP voter turnout does not automatically translate to the president winning the election.

“In 2016 Republicans ended with a 0.6% turnout advantage in #Florida,” Rubio argued in a Tuesday tweet that included a wave GIF. “Just wait until you see what it is this time.”

In 2016 Republicans ended with a 0.6% turnout advantage in #Florida

Just wait until you see what it is this time pic.twitter.com/UvQ4ZgyfRT

Netizens began to call Rubio out over his use of an image of a blue wave while implying that Republican, or “red,” voter turnout will translate to Trump’s reelection.

Do you know you posted a blue wave?

Sir, and I say this with all due respect, ur an idiot

Plus, we aren’t in the market for ludicrous popinjays.

Wait until you find out how many Republicans put country over party by voting for Joe Biden. #RepublicansForBiden

It would need to be phrased like a Bible verse for him to MAYBE get it.

Who told Marco he could join the Resistance? We don't want you Marco. Stay in your own party. But you are right. Blue wave coming.

Who told Marco he could join the Resistance? We don't want you Marco. Stay in your own party. But you are right. Blue wave coming.

Rubio previously predicted there would be a “red wave” in Congress during the 2018 midterm elections.

"Forget about a blue wave," Rubio added, as reported by The Hill. "A red wave of votes started coming in. That’s what’s gonna happen again now."

Of course, this was not the case, as Democrats reclaimed a majority in the House of Representatives after winning 41 seats, for a net gain of 39 seats, in the elections.

The Florida senator came under fire earlier this week after he appeared to back a group of Trump supporters who surrounded a Biden campaign bus in Texas last week.

Please vote. Please volunteer this weekend. The future of our democracy is at stake. pic.twitter.com/G0O4yg2vnJ

“I saw yesterday a video of these people in Texas - did you see it?” Rubio said to attendees of a Trump rally at the Miami-Opa Locka Executive Airport in Miami-Dade County, Florida.

“All the cars on the road … We love what they did! But here’s the thing they don’t know. We do that in Florida every day.”