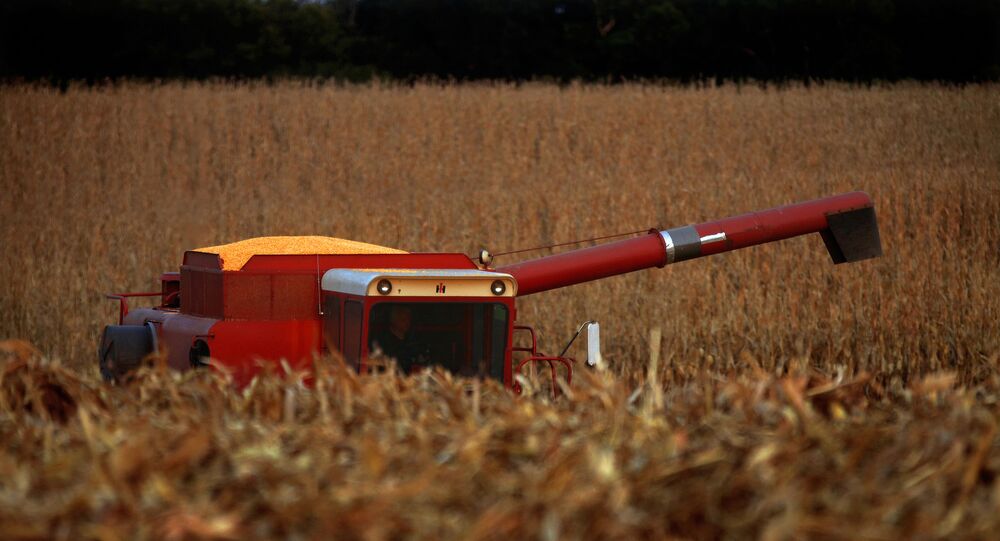 VIGO COUNTY, Indiana (Sputnik) - A family-owned farm in Indiana has been on the forefront of fierce international trade wars for most of Donald Trump’s presidency. It suffered a collapse in prices and dwindling market shares, had to innovate and economise to stay afloat, but now is back to profits and optimistic the best is yet to come.

Marty Evans, who raises corn and soybeans together with his children, is a staunch Trump supporter. His rationale provides an insight into voter sentiment in vast rural America ahead of the Election Day - a showdown between the Republican incumbent and his Democratic rival Joe Biden.

"I am not going to speak for all farmers, but for people that I know I would say yes", Evans replies to a question if agricultural workers support Trump. "I think farmers in general are supportive of Trump because we want a fair deal. We like growing corn, we like growing soybeans and want to be able to market it fairly and make money doing it."

Trump seems to have won their hearts by engaging since 2018 in an exchange of painful tariff blows with China in an attempt to gain better access for American producers to the behemoth Asian market. The president at least partially delivered on his promises before the election by securing a trade deal in late 2019, which committed China to increasing imports of US goods, including farm products, by more than 50 percent over pre-trade war levels.

The perceived victory came at a cost. Evans describes how his farm, one of the largest grain producers in Vigo County, was pushed below profitability by a two-digit decline in prices after China started to retaliate in kind to Trump’s tariffs. He admits margins have not fully recovered yet, though the business is in the black again.

"They [prices] dropped, I would say, between 30 and 40 percent... They are not back to where they were, but we are back to a level that is profitable again. Or at least we are not losing money where we are today and agriculture in my mind looks good and promising", he says.

At the height of the trade war, US soybean exports to China, which accounts for 60 percent of overseas purchases of the product, fell by more than 70 percent with South American producers swiftly moving to fill the void. The deal, according to both Evans and official statistics, started bearing fruit only in August, months after it was reached.

"When we did get a deal with China it took a little while to respond and actually as of about August 1 prices were still kind of depressed for agriculture. And from about August 1 till now China has stepped up and tried to make their deal work. There have been some problems with weather in South America. So a couple of different things have lined up and have made prices come back up", the farmer says.

Although the business is worse off than it was before the trade war, he has only words of praise for Trump: "We are glad that the President did this, that our government tried to get us a better deal in a world trade."

He believes that US farmers were relatively well prepared to survive lean months due to a low debt burden and reserves they accumulated beforehand. Evans also searched for new market niches domestically and found them in ethanol and biodiesel.

"So we just didn’t buy that much stuff, we just tried to keep producing the stuff we had to have to grow crop. And we did lose equity a little bit at that time. You have to prepare for the bad years when you have good years", he says. "Exactly, just like a storm. That’s a good way to explain it."

The farm with thousands of acres of land and grain silos are tended by just seven workers, including Marty Evans and his three children, who rely on an impressive array of machinery and novel technologies like GMO crops self-repelling parasite insects.

Soybeans have already been picked up, but a third of corn is still in the fields. Night shower rains and heavy clouds delay harvesting, giving the farmers some time for a chat with visitors - about Russia ("Do you still have Communism?"), agriculture and politics.

It turns out the whole farm supports Trump. They give the incumbent credit for determination in promoting their interests abroad, deregulation efforts, tax cuts and climate change conservatism.

"When legislations being passed full of crazy ideas that have no common sense, you just see it’s wrong from the standpoint of people out here who get hands dirty. He has allowed a lot of regulations to be relaxed, given back to the hands of the people who really care, not the people in DC", Burbrink says.

"From a farmer’s standpoint, we went through that [trade war] up and down. We have a positive feeling right now. From America’s standpoint, I don’t see how we cannot want to continue to go with President Trump due to his record and everything he does here," he adds.

Biden and his pledges arouse more confusion than animosity among farmers.

"There is a lot of talk about Biden going to take us away from fossil fuels in... I don’t know what he said - five or four years? I don’t know how all these tractors are going to operate. There is just no way how things like that can physically happen in a common-sense approach", Burbrink says. "He is going to stop hurricanes too... Good luck with that!"

© AP Photo / Seth Perlman
Trump Unveils $19 Billion Relief Program for Farmers
Their farm is located in the southern part of Vigo County famed for a unique record of voting for a candidate who would eventually win US presidency. It has guessed it right 16 times in a row with an unmistakable streak dating back to 1956. Most local pundits predict that this year Vigo will vote for Trump again, though by a narrower margin than whopping 15 percentage points in 2016.
...
Reddit
Google+
Blogger
Pinterest
StumbleUpon
Telegram
WhatsApp
13
Tags:
farmers, Election, US
Community standardsDiscussion