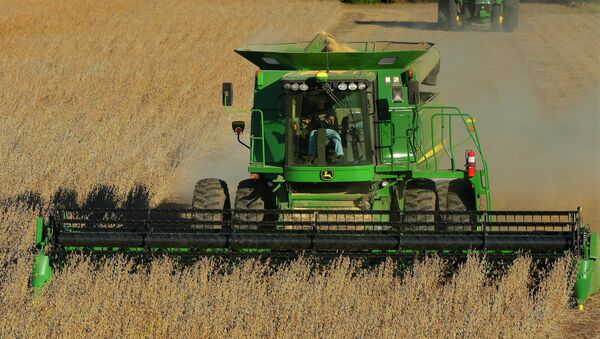 © AP Photo / Seth Perlman
Subscribe
US President Donald Trump has announced a new $19 billion relief program for US farmers and ranchers affected by the COVID-19 pandemic and associated shutdowns.

Trump told reporters at the White House on Friday that his administration would be implementing a new relief program aimed at supporting farmers with direct cash subsidies as well as purchasing farm goods for distribution to those in need.

“America now knows more than ever that the wholesome food that our families depend on” comes from US farmers, US Secretary of Agriculture Sonny Perdue said at the press conference.

In recent weeks, Americans have seen the “heroic patriotism of our food supply workers," he said.

The secretary explained that the cash payments would depend in part on the roughly $6.6 billion still in the Commodity Credit Corporation (CCC), a New Deal-era, government-owned agency that exists to stabilize agricultural prices, but that it would also lean on "COVID money" until the CCC's budget is replenished in July.

The USDA will also be spending $3 billion to buy up produce, dairy products and meat to distribute through food banks and other community and faith-based organizations to those in need. This, he said, would hopefully avert as much destruction of agricultural goods as possible.

The New York Times reported on April 11 that US farmers were being forced to destroy millions of pounds of crops and other foodstuffs because of the severe disruptions in the food supply chain. Not only have restaurants closed their doors, but so have schools that feed millions of children.

Trump told reporters that the expected death toll in the US from the COVID-19 pandemic had been revised downward significantly from that of a month ago. Whereas models one month ago predicted hundreds of thousands of deaths, Trump noted the present estimate is between 60,000 and 65,000 deaths in the US.

US Vice President Mike Pence said the death toll in the US on Friday afternoon was more than 36,000.

"One [death] is too many. It’s a horrible thing that happened to our country," Trump said. "It should never ever happen again."

Trump said his administration's efforts had ensured a steady supply of life-saving ventilators, which can become necessary in the worst cases of COVID-19.

"We’re now the king of ventilators, we have hundred of thousands under construction," Trump said. "We don’t need them ourselves." He noted the US would be helping to supply other countries, including Mexico, with ventilators.

Pence, who heads the president's Coronavirus Task Force, noted that states able to meet the newly announced Phase 1 criteria for re-opening and demonstrate the necessary plans for future testing may immediately proceed with Phase 1.