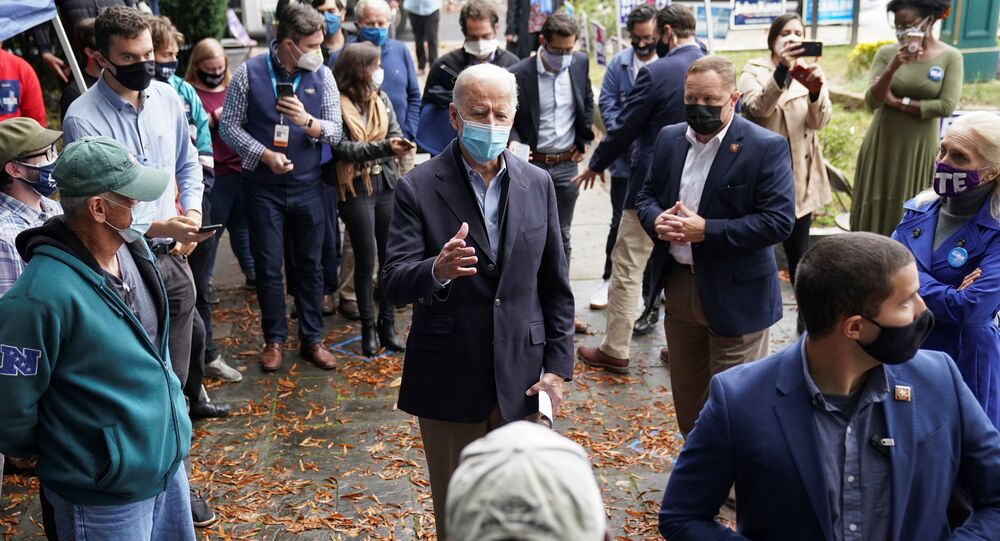 MOSCOW (Sputnik) - Democratic presidential candidate Joe Biden has called on the US citizens to vote in the wake of the "rushed" confirmation of Judge Amy Coney Barrett as an associate justice to the Supreme Court, according to a statement published on the politician's official website.

"The rushed and unprecedented confirmation of Amy Coney Barrett as Associate Justice to the Supreme Court, in the middle of an ongoing election, should be a stark reminder to every American that your vote matters," the statement issued late on Monday said.

The politician also recalled that a few days following the presidential election day, the Supreme Court was set to hear the case on the Affordable Care Act, widely known as Obamacare, which US leader Donald Trump seeks to "tear down."

"But we will not give up. If you want to protect your health care, if you want your voice to be heard in Washington, if you want to say no, this abuse of power doesn’t represent you — then turn out and vote. Vote for a president, for Members of Congress, and candidates up and down the ticket who actually have a plan for health care, and who will build on the Affordable Care Act to expand coverage, bring down costs, and give you more choices," the statement added.

In addition, Biden has called to vote for the legacy of the late justice Ginsburg, who proved that "courage, conviction, and moral clarity can change not just the law, but also the world."

On Monday, the US Senate confirmed Judge Amy Coney Barrett's nomination to be a Supreme Court justice by a 52-48 vote, strictly along partisan lines, filling the vacancy left by the late Ruth Bader Ginsburg. Later in the day, Barrett was sworn in at a ceremony at the White House, taking the first of the two oaths required for her to officially become a Supreme Court justice.

© AP Photo / Amy Harris
Rapper Lil Pump Endorses Trump for Presidency, Slams Biden for Taxes
Barrett's confirmation ahead of the November 3 election was a political victory for Trump and the Republicans, as there are now six Republicans' nominees and only three Democrats' nominees in the Supreme Court.

The US president wanted to fast-track Barrett's confirmation because he feels the upcoming election could end up being decided by the Supreme Court.