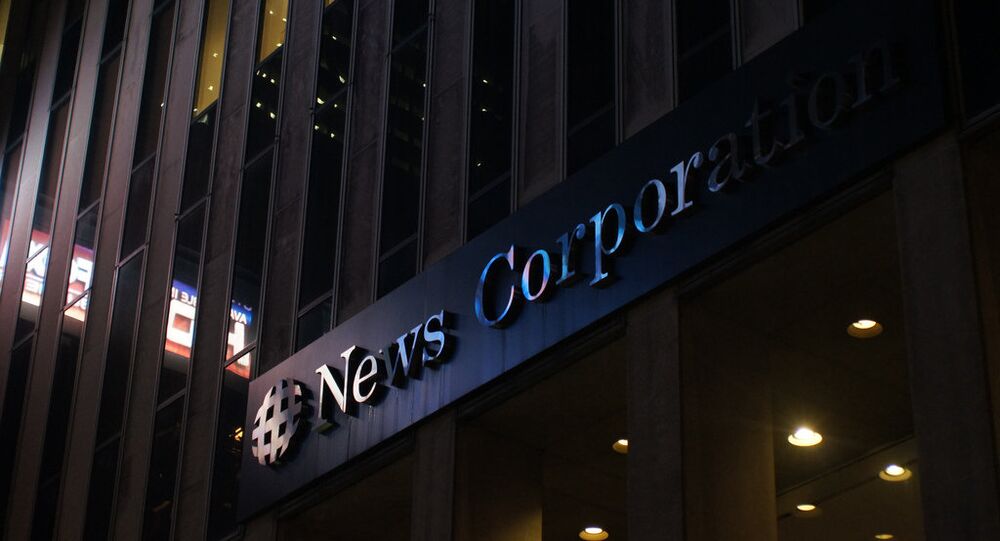 James Murdoch, son of media mogul Rupert Murdoch, has opened up about the reasons that prompted him to quit his Father’s company News Corp, which controls publications such as The Wall Street Journal and New York Post, as well as several publications in Rupert Murdoch's native Australia.

© AP Photo / Matt Dunham
** FILE ** In this April 16, 2008 file photo, printer Belinda Affat poses for photographs with a copy of the Wall Street Journal at a printing press in London. A year into its takeover by Rupert Murdoch's News Corp., The Wall Street Journal is evolving under what its new editor calls "incremental radicalism." Steeped in tradition, the 119-year-old newspaper has expanded its coverage beyond corporate America, placed more breaking stories on the front page and increased the size of photos and graphics. (AP Photo/Matt Dunham, file)

"I reached the conclusion that you can venerate a contest of ideas, if you will, and we all do and that's important… But it shouldn't be in a way that hides agendas,” said James Murdoch in an interview with the New York Times on 10 October.

Murdoch, who together with his wife set up Quadrivium, a foundation touted as supporting democracy, voter participation, and climate change projects, added:

A contest of ideas shouldn't be used to legitimise disinformation. And I think it's often taken advantage of. And I think at great news organisations, the mission really should be to introduce fact to disperse doubt — not to sow doubt, to obscure facts, if you will."

The fourth child of the 88-year-old billionaire founder of News Corp. also voiced regret that his ability to exert influence on the editorial directions of publications had been limited as a board member of the media company.

“I think there’s only so much you can do if you’re not an executive, you’re on the board, you’re quite removed from a lot of the day-to-day decisions, obviously,” he said.

Murdoch explained that he felt increasingly uncomfortable with his position on the board and that it was “not that hard a decision to remove myself and have a kind of cleaner slate”.

There has not yet been an official response to James Murdoch’s remarks from News Corp.

In July, Murdoch announced that he was resigning his position on the board of News Corp, after being cited by The New Yorker in 2019 that he was becoming increasingly “uneasy” about news coverage at Fox News.

Rupert Murdoch’s company, Fox Corporation, owns the Fox News network, which is run by his other elder son, Lachlan Murdoch, 48, who is often touted as the “heir apparent” to the empire.

At the time, it was not immediately clear what editorial content might have prompted James Murdoch’s move.

It was suggested by American mainstream media that he and his older brother Lachlan Murdoch had “indicated discomfort” with the “conservative slant” of News Corp and Fox Corp, where the hosts were perceived as supporters of President Donald Trump.

"There are views I really disagree with on Fox," James Murdoch had been quoted as saying.

While Fox News has been criticised for allegedly practicing biased reporting in favor of the Republican Party and Donald Trump, the company has emphatically dismissed claims of bias.