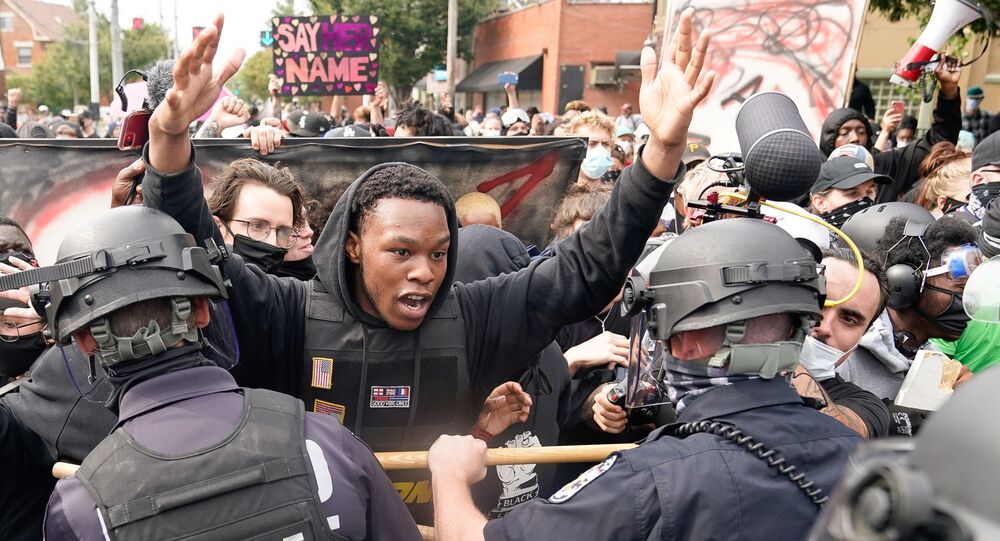 'We Got Shields!' Video of Louisville Protesters Getting 'Supplies' From U-Haul Truck Goes Viral

The truck's cargo appears to have included signs saying “Abolish the Police” and “Abolition Now” that can be seen in the video as they are retrieved by protesters.

Following the protests that rocked the city of Louisville, Kentucky on Wednesday night, a peculiar video that appears to depict the protesters' preparations has emerged online.

The video in question depicts protesters grabbing what Fox News describes as "signs, shields, water and other supplies" from a U-Haul truck that “pulled up near Breonna Taylor protests".

"We got shields!" a woman can be heard shouting in the background, as protesters can be seeing retrieving signs saying "Abolish the Police" and "Abolition Now".

While the BLM crowd was marching in Louisville, a U Haul truck pulled up with shields and supplies for the group to use. pic.twitter.com/VestCPdyTk

​Commenting on this development, a number of social media users cracked joke about how “spontaneous” the protesters' actions appear in light of this vid, and pondered on whether it might be possible to track down whoever rented the truck.

Wow I can't believe their luck! A van just happens to drive up with all these supplies

Imagine the luck!! That a moving truck full of shields and other “peaceful protest supplies” just happens to show up there today. Total coincidence.

- Grab the license plate # of the truck.
- Track down which uHaul location rented it out.
- obtain a warrant for the rental records
- identify who paid for it
- arrest that person for inciting a riot

Elementary stuff that the FBI & DOJ should do TODAY...but they won’t

The protests erupted after a US Grand Jury ruled to not charge any police officer involved in the fatal shooting of African-American woman Breonna Taylor during a narcotics raid back in March, with only one officer being indicted for wanton endangerment.