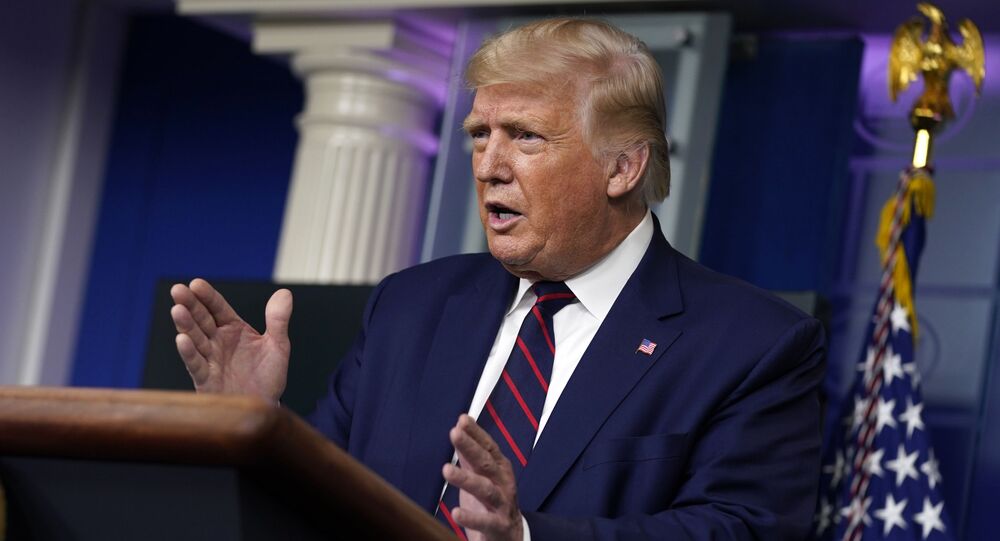 POTUS has repeatedly hinted that “sleepy” Democratic presidential hopeful Joe Biden is mentally unfit to be at the helm of the US, while the former vice president’s medical assessment described him as a “healthy” and “vigorous” individual.

Speaking at a campaign rally in Fayetteville, North Carolina, on Saturday night, President Donald Trump told voters that he may ink an executive order to prevent Democratic presidential hopeful Joe Biden from running as POTUS’ opponent in the upcoming 3 November election.

“We can joke, we can play games, we can have fun. You can’t have this guy as your president.  […] Maybe I’ll sign an executive order [that] you cannot have him as your president”, Trump said, in an apparent reference to Biden.

During the rally, POTUS also described the ex-US vice president as “the dumbest of all candidates” and “the worst candidate in the history of presidential politics”.

Additionally, Trump again dwelt on his suggestion that Biden is allegedly taking drugs to enhance his mental performance before delivering campaign speeches.

“I got a debate coming up with this guy. You never know. They gave him a big fat shot in the a**[…] and for two hours, he is better than ever before. Problem is, what happens after that?”, the US president said, reiterating his assertion that he and Biden should be tested for drugs before taking part in the forthcoming upcoming presidential debates.

This prompted Biden to release his medical assessment, which described the 77-year-old as a “healthy” and “vigorous” individual. In the latest development, Biden pledged in an interview with CNN to be “totally transparent” as he berated Trump for making disparaging remarks about the Democratic presidential nominee’s mental acuity.

© AP Photo / Patrick Semansky
Trump Viciously Trolls Biden, Retweets Vid of Candidate Grooving to NWA’s ‘F*** tha Police’ Twice
In early September, POTUS slammed the US media for their unfair treatment of him and Biden, claiming that the questions addressed to the former vice president are "meant for a child".

Trump called it a "disgrace" that he was getting inconvenient or complicated questions, like about a recent report in The Atlantic, in contrast to the soft treatment the media has given to Biden.

According to the US president, the Atlantic article claiming that he has offended American war veterans is another "hoax" targeting his election campaign. The news outlet cited unnamed sources as saying that Trump called Republican leaders who fought in major wars "suckers" and "losers", allegations that POTUS vehemently denied.

The Atlantic article also included unconfirmed claims that the US president did not want to grant state honours to late Arizona Senator John McCain after his death from brain cancer in 2018, also describing him as a loser.

In a series of angry tweets, Trump called the whole story "fake news" and denied he had ever shown disrespect for McCain, despite their political disagreements.