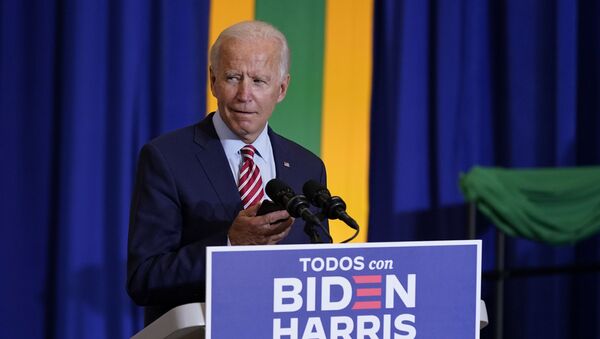 Ilya Tsukanov
All materialsWrite to the author
The Democratic candidate was accused of trying to pander to Latino voters on Tuesday after playing an excerpt from Luis Fonsi’s 2017 hit song Despacito on his phone during a campaign stop in Florida.

China is drooling. They can’t believe this! https://t.co/AAmBGgHhyR

“China is drooling. They can’t believe this!” Trump wrote.

This was the second time Trump retweeted the video, having previously posting it along with the comment “What is this all about?”

What is this all about? https://t.co/AAmBGgHhyR

Trump offered no explanation for the tweets. However, Republicans have repeatedly attacked Biden and the Democrats for their alleged plans to defund or eliminate the police in the wake of mass anti-racism and police violence protests in cities across America this past summer. Biden himself has denied having any plans to “defund the police,” saying law enforcement “need more help” and “more assistance,” and accusing the president of “defunding the police” through cuts to a $10 billion crime bill Biden co-authored as a senator in 1994 which ended up almost doubling the number of Americans behind bars.

Biden took flak from social media users on Tuesday while trying to woo Latino voters in Kissimmee, Florida by playing an excerpt from Despicato, bumping his head to the beat and awkwardly suggesting that if he “had the talent of any of these people [he’d] be elected president by acclamation.”

The moment was instantly compared in cringe-worthiness to Hillary Clinton’s 2016 attempt to pander to African American voters during a radio interview by saying she carries hot sauce around in her purse all the time.