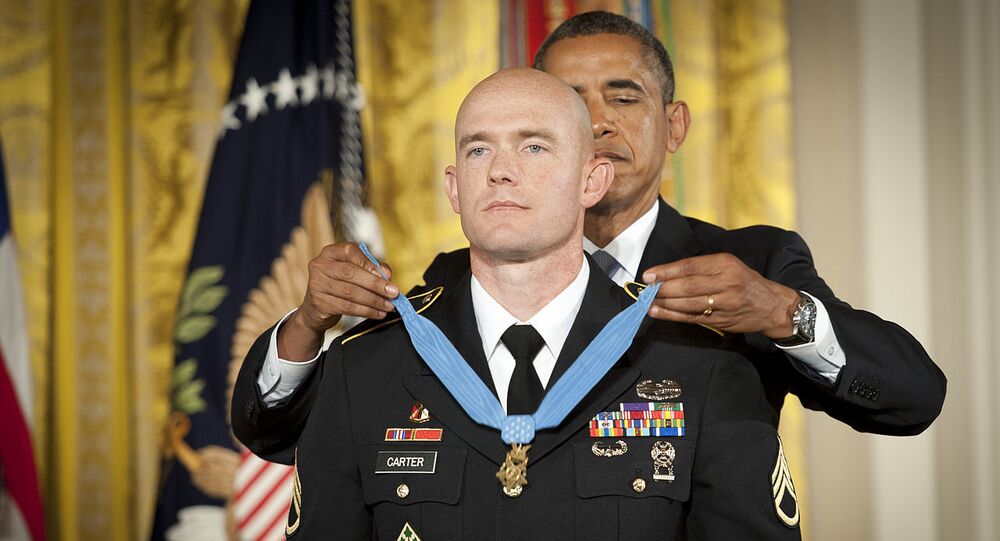 In 2013, Ty Carter was awarded the Medal of Honor by then-US President Barack Obama for bravery in a 2009 battle in Afghanistan, where 52 American soldiers fought almost 400 Taliban* militants.

In an interview with the new lifestyle website Mr Feelgood, Medal of Honor-winning US soldier Ty Carter focused on how he managed to survive a 2009 deadly fight with the Taliban in Afghanistan and tried to save his comrade-in-arms during that skirmish.

Armed only with an M4 carbine rifle, Carter fought back, helping 4th Infantry Division soldiers prevent the base from being totally overrun by the Taliban during what is now known as the Battle of Kamdesh.

© CC0
Medal of Honor recipient and U.S. Army Staff Sgt. Ty M. Carter, center, and his wife, Shannon, receive a plaque during a ceremony in his honor at the Pentagon in Arlington, Va., Aug. 27, 2013. Carter was awarded the Medal of Honor Aug. 26, 2013, for actions during the Battle of Kamdesh at Combat Outpost Keating, Nuristan province, Afghanistan, Oct. 3, 2009. Carter was a cavalry scout with Bravo Troop, 3rd Squadron, 61st Cavalry Regiment, 4th Brigade Combat Team, 4th Infantry Division at the time of the battle

The 40-year-old told Mr Feelgood that when he and several other US soldiers were inside a Humvee amid gun and grenade fire, his thoughts flew to his family in California before he took a decision to leave the vehicle.

"I had a four-year-old daughter. And my brother Seth was shot dead at a party in 2000. So when we were in that Humvee and I looked out there, I saw my brother or my daughter and I felt that I needed to get out there. I knew I could help, and I knew I would", Carter said.

He then explained what was behind his drive to save fellow infantryman Specialist Stephan Mace, who received first aid from Carter and was then airlifted to a hospital, where he later succumbed to his wounds.

"Stephan Mace and I were not friends. But just because I don't get along great with somebody doesn't mean I don't care about them or value their life. […] He was wearing the uniform so was part of my family, so I will do what I need to do. […] As I was running out there I wasn't thinking about the bullets that were hitting all around or the explosions. All I was thinking was that I need to help this person", Carter pointed out.

He said the fact that he survived "but Mace didn't" was one of the reasons Carter had severe post-traumatic stress disorder (PTSD), something that the former soldier said he first refused to accept.

"When you are going through severe post-traumatic stress you don't actually notice it. It's a complete mental changer — you just know you're not feeling quite right, or a little off. But the people around you notice. […] My superiors ordered me to go or they were going to take my rank. I was very resistant at first — I was escorted the first time I went to counselling", the war hero emphasised.

Carter also said that when he was offered "a little cameo" in the film The Outpost, about the Battle of Kamdesh and was released on demand last month, he perceived it as a chance to help him overcome his PTSD.

"So every time I am feeling stressed or anxious, I grab a good whiskey and I watch the episode of the Netflix show about my story. The emotions come back sometimes, sometimes they don't, but then it relaxes me", the father-of-three said.

Carter was decorated with the Medal of Honor by Barack Obama in an award ceremony in 2013, when the then-US president specifically praised "the tough warrior's" courage and strength he showed during the Battle of Kamdesh.

*Taliban, a terrorist group banned in Russia and a number of other countries

US Military Reportedly Recovers Remains From Its Afghanistan Plane Crash