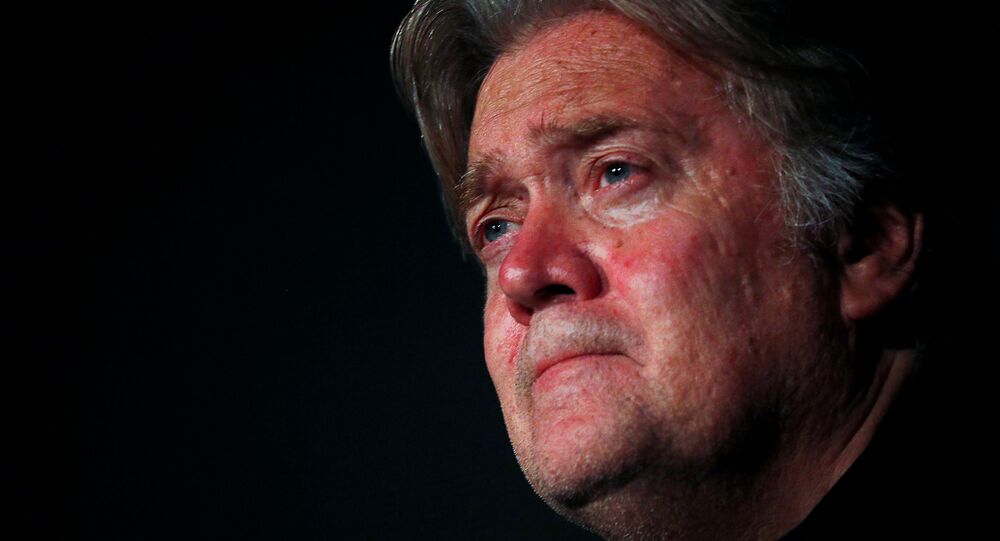 After departing from the Donald Trump administration, Bannon apparently continued to support the president's agenda, becoming involved in a private initiative aiming to construct a wall on the border with Mexico to prevent immigrants from illegally crossing the southern border.

The former strategist for the US president, Steve Bannon, has been arrested in connection with his participation in a fundraiser for a private Mexico border wall project. He and three other individuals, US Air Force veteran Brian Kolfage, Andrew Badolato, and Acting Administrator of the Drug Enforcement Administration Timothy Shea, have been charged by the US Justice Department with conspiracy to commit wire fraud. All of them face up to 20 years in prison should they be found guilty.

The department insists that the "We Build The Wall" crowdfunding campaign, which seeks to raise money to build a wall on the US border with Mexico akin to the one being pursued by President Donald Trump, was a major scam that defrauded hundreds of thousands of people. According to the DoJ’s statement, the four used the $25 million raised for the cause in a manner that was "inconsistent with public representations".

The US Justice Department pointed out that the group had promised to spend 100% of the raised funds on building the wall, but in fact used at least part of the money on personal expenses. The announcement says that US Air Force veteran Brian took at least $350,000 from the coffers, while Bannon transferred over $1 million to his non-profit organisation called "Non-Profit-1". The same non-profit, along with a shell company owned by Timothy Shea, was used by the four to try to hide the nature of the "We Build The Wall’s" illegal spending, the DoJ said.

"They [rerouted payments to Kolfage] by using fake invoices and sham ‘vendor’ arrangements, among other ways, to ensure, as KOLFAGE noted in a text message to BADOLATO, that his pay arrangement remained ‘confidential’ and kept on a 'need to know' basis", the statement reads.

US President Donald Trump has reacted to the news of his former aide’s arrest by stating that he has long stopped working with Bannon and distanced himself from the "We Build The Wall" project.

"I feel very badly. I haven't been dealing with him for a very long period of time. Don't know anything about the project at all. It's a very sad thing by Mr. Bannon. It was something I very much thought was inappropriate to be doing", POTUS said.

White House spokeswoman Kayleigh McEnany, in turn, added that President Trump did not support the private wall project, believing that such things should be built by the government and not private companies or individuals.

Bannon chaired the advisory board of the project, which he joined after his sudden departure from the post of President Donald Trump's chief strategist and senior counsellor in August 2017. During his time at the White House and on Trump’s campaign, Bannon was reportedly one of the key proponents for building a wall on the border with Mexico, which Trump made one of the primary goals of his presidency. The wall was intended to be built on the southern border to prevent migrants from crossing into the US illegally. The "We Build The Wall" initiative made its goal building an equivalent wall on private property, as Trump’s pet project was being stalled as a result of opposition from Democrats in Congress.