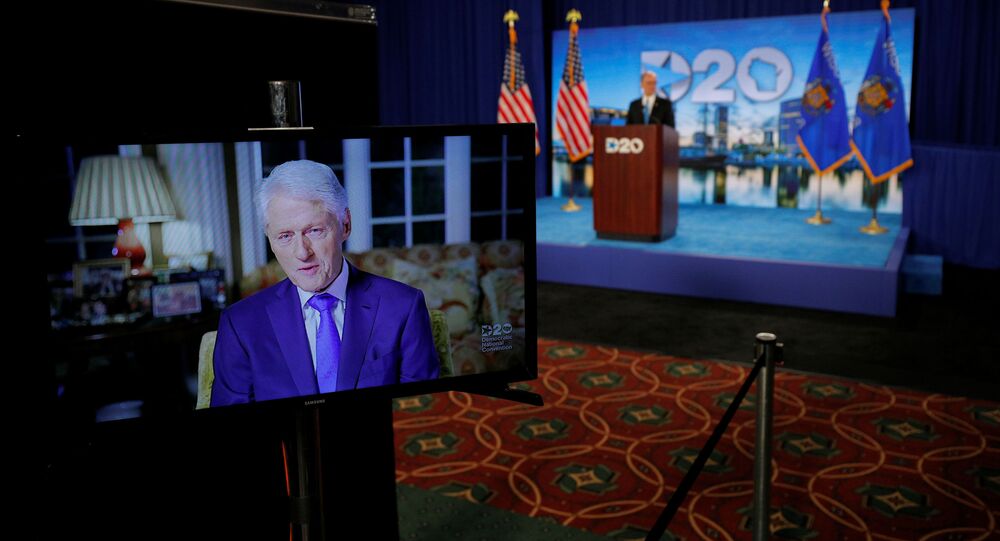 President Bill Clinton appeared for the 11th time before a presidential nominating convention on Tuesday, saying that Joe Biden is the right choice for America. He appeared to have been much less optimistic about Biden four years ago.

Donald Trump's supporters have unearthed a 2016 video in which Bill Clinton rips into the "awful legacy" of the Obama-Biden administration – four years before endorsing Joe Biden for president.

In the clip, filmed in Washington state in March 2016, Bill Clinton is seen campaigning for his wife Hillary.

He says: "If you believe we can all rise together, if you believe we've finally come to the point where we can put the awful legacy of the last eight years behind us and the seven years before that where we were practicing trickle-down economics with no regulation in Washington, which is what caused the crash, then you should vote for [Hillary]".

FLASHBACK: Bill Clinton blasted the “awful legacy” of the Obama-Biden administration while campaigning in 2016. #DemConvention pic.twitter.com/1yqa0gv59D

​The comments raised many eyebrows at the time, and a Clinton aide clarified the former president was referring to Republicans' "obstructionism" and not President Obama.

"When Republicans controlled the White House, their trickle-down approach drove our economy to the brink of a collapse. After President Obama was elected, Republicans made it their number one goal to block him at every turn", spokesman Angel Urena said.

"That unprecedented obstruction these last eight years is their legacy, and the American people should reject it by electing Hillary Clinton to build on President Obama's success so we can all grow and succeed together", he added.

Republicans adopted a no-cooperation strategy in Congress after Barack Obama's victory in 2008. They gained leverage after winning the House in 2010 and the Senate in 2014.

Obama complained before the 2014 midterms that the GOP had blocked about 500 pieces of legislation that would have helped the middle class (although that number included judicial and executive appointments and not only bills).

Bill Clinton featured at this year’s all-virtual Democratic National Convention on Tuesday, praising Joe Biden for his record with the Obama administration and attacking Donald Trump for his management of the COVID-19 pandemic.

"If you want a president who defines the job as spending hours a day watching TV and zapping people on social media, he’s your man", Clinton said of Trump.

"Denying, distracting, and demeaning works great if you're trying to entertain and inflame. But in a real crisis, it collapses like a house of cards", added the former president, who was impeached in 1998 for lying to investigators about his relationship with Monica Lewinsky.

He went on to say that Obama and Biden had delivered "more than six straight years of job growth" following the 2008 financial crisis and was hopeful Biden could lead a recovery from the pandemic.

"His work created a lot of new jobs and started many new companies in communities across America", Clinton noted. "Now Joe is committed to building America back again".