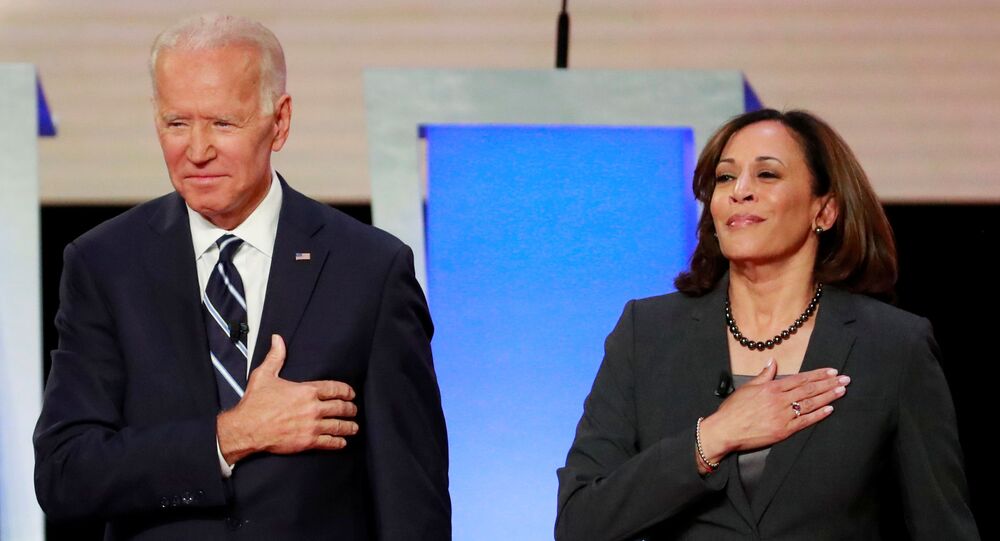 Kamala Harris: How Have Media and Netizens Reacted to Joe Biden’s Choice of Running Mate?

The daughter of an Indian mother and Jamaican father, Harris started her political career in California, where she worked in the San Francisco District Attorney's Office. In all, she served 25 years as a prosecutor. This year, she ran for president and had a good start, but then dropped out of the race, citing a lack of funds.

Presumptive Democratic presidential nominee Joe Biden announced on 11 August that he had chosen Senator Kamala Harris to be his running mate in the upcoming presidential election, which Biden branded "a battle for the soul of this nation" and noted that the Californian lawmaker understands this. He also lauded her for taking on the big banks together with his late son Beau, as well as protecting women and children. The announcement received mixed reactions from the media and netizens.

Al Jazeera called Biden’s choice "unprecedented", while USA Today noted that black and South Asian-American women approved of the pick. The US mainstream media praised Harris and drew attention to the fact that her nomination angered conservatives. The New York Times called her the "future" representing an evolving America, while The Washington Post said that Trump’s supporters called Harris radical. Some mainstream media also recalled that Trump has attacked Harris. In particular, NBC wrote that the president said the senator had been disrespectful to Biden and called her "nasty".

Many social media users contended that Biden only chose Harris because of her ethnic background and noted that there were far more worthy candidates.

Lol she was picked only because of her ethnic background.

I get that they picked her to reach out to minorities but Elizabeth Warren is the far better choice. She did many things during her job in Congress. But what did Harris do? Never heard anything.

​Others drew attention to the fact that Harris harshly scolded Biden during a presidential debate on his race record and said she believed the women who had accused the prominent Democrat of inappropriate touching.

I'm old enough to remember watching Kamala Harris rip Joe Biden to shreds on the debate stage over his opposition to desegregation busing, and Biden calling Harris out for her record as a Prosecutor.

Turns out neither of them really cared about racism or criminal justice reform!

​Some netizens bluntly accused Harris of being a sell-out

If he is willing to compromise with someone that said the things to him and about him that she did, what will he compromise as President!? If she really feels the way about him she did in the debates and can sell-out to run as his VP what will she sell-out for as VP!?

​Others recalled controversial statements that the California senator had made in the past.

Kamala Harris laughing and bragging about her prosecuting parents over truancy... (2010) pic.twitter.com/US6pOwf5I0

If @KamalaHarris believes people under 25 are “incredibly stupid” and need a babysitter in college... why does she support anyone under 25 voting?
pic.twitter.com/13avykA4VN

​Still others jokingly said they were happy with Biden’s choice, because actress Maya Rudolph would again appear on Saturday Night Live, where she portrayed Harris.

Joe Biden: “Kamala Harris will be my running mate for VP!”