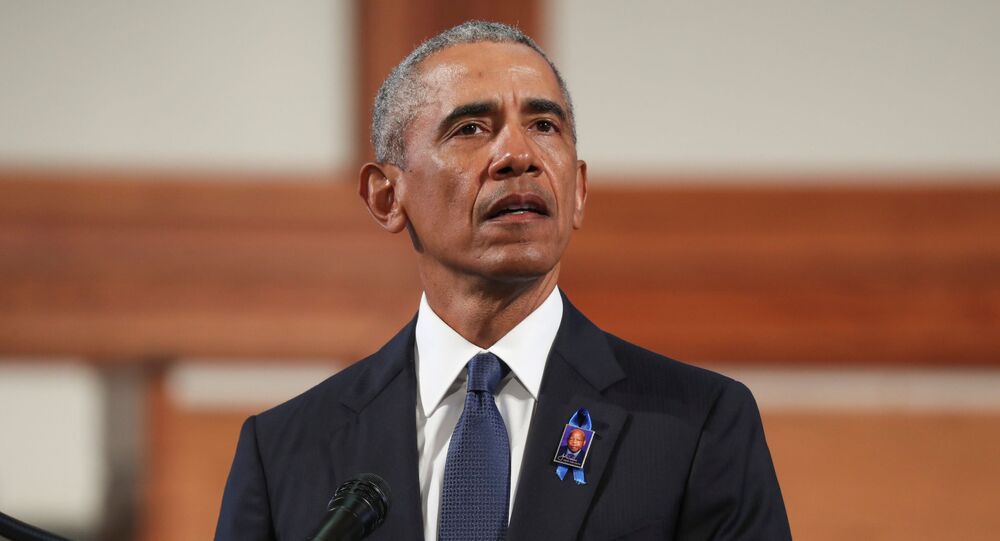 In July, Barack Obama’s half-brother Malik Obama, who supported Republican US President Donald Trump in the US 2016 election despite his brother’s endorsement of fellow Democrat Hillary Clinton, published a memoir titled ‘Big Bad Brother From Kenya’, in which he suggested that his brother was “cold and ruthless” to his Kenyan family.

“He got rich and became a snob,” Malik stated in the interview, adding, “What I saw was he was the kind of person that wants people to worship him. He needs to be worshiped and I don’t do that. I am his older brother so I don’t do that.”

In a new book released on 11 July, the 58-year-old Malik, also known as 'Abongo' or Roy', narrated how his personal relationship with his younger brother has deteriorated, resulting in Malik endorsing current US President Donald Trump in the US 2016 election over Hilary Clinton.

Malik wrote in a 435-page memoir that his relationship with the two-term Democratic president used to be warm, after they first met in 1985, three years after the death of their father, Barack Hussein Obama Sr., a Kenyan senior governmental economist. Malik was the best man at his brother’s wedding to Michelle Obama in 1992.

Kenyan-American Malik, who shared in his book photos of him with “carefree Barack” spending easy-going times in Kenya, said that the situation changed shortly after his half-brother was elected as the president of the United States in 2008, in particular after the older half brother told his younger half sibling about his plans to establish a foundation named after their father.

© AP Photo / Matt Dunham
Malik, the half-brother of U.S. President elect Barack Obama, is picked up by friends and family members as they celebrate Obama's victory in the U.S. election, at the family's homestead in Kogelo village, Kenya, Wednesday, Nov. 5, 2008.

“We had a big fight on the phone because he was not in support and insisted I shut down the website and not continue with the foundation. He had his reasons but I was not having any of it,” Malik wrote in the memoir, detailing a call shortly before his brother’s inauguration. “We talked late into the night that night. He threatened to ‘cut me off’ if I continued with the idea.”

Malik Obama claimed that Barack Obama told him during the same phone call that his aunt, Hawa Auma Hussein, the only surviving full-sibling of their father, would not be invited to the inauguration ceremony.

During a family dinner in 2015, when Obama and his wife visited Kenya, the older brother made a personal appeal on behalf of their aunt, who lived in near-poverty in a collapsing house and worked as a charcoal seller.

“It was awkward as I tried to convey Auntie Hawa’s wishes to her nephew. She wanted him to look out for her, build her a house, etc. I told him he owed it to her, to the family for him to do anything, something,” Malik writes, claiming that “Barack said that he was broke.”

Malik narrated another story of how the former president disappointed the family when he paid $5,000 instead of $20,000 to bury their late aunt, Zeituni Onyango, who lived illegally in Boston, was granted citizenship in 2010. Onyango is said to have died 7 April 2014 in a care home in Boston.

“We needed to pay for the bills and the cost of her transportation back to Kenya,” Malik writes, describing a 16 April meeting in the Oval Office. “[Barack] asked me how much and I told him roughly $20,000. This was too much he said.”

He said that the family spent a month raising the rest of the amount.

“She really had been good to him,” Malik Obama writes. “I don’t understand how somebody who claimed to be a relative or a brother can behave the way that he’s behaving, be so cold and ruthless, and just turn his back on the people he said were his family.”

Mailk also criticized Barack Obama’s memoir, ‘Dreams From My Father’, saying it “wasn’t accurate” and contained “embellishments. In the book, the former president stated that his grandfather Obama was not imprisoned in 1949 by the British colonial army.

© AP Photo / Karel Prinsloo
This Tuesday, Sept. 14, 2004 file photo shows Malik Obama, the older brother of US President Barack Obama, who holds an undated picture of Barack, left, and himself, center, and an unidentified friend in his shop in Siaya, eastern Kenya. A Kenyan half-brother of President Barack Obama says he will vote for Republican presidential nominee Donald Trump and not the candidate his brother has endorsed, Hillary Clinton

In 2016, Malik Obama, now an American citizen, expressed support for Republican candidate Donald Trump in the 2016 presidential election against his brother’s fellow Democrat Hillary Clinton. The latter had served as US Secretary of State in the Obama administration.

Malik told The Post that he still supports and believes in Trump.

He also slammed the 2020 Democratic presidential candidate, former US Vice President Joe Biden, an Obama appointee, as too old, suggesting that he is unlikely to win the race.