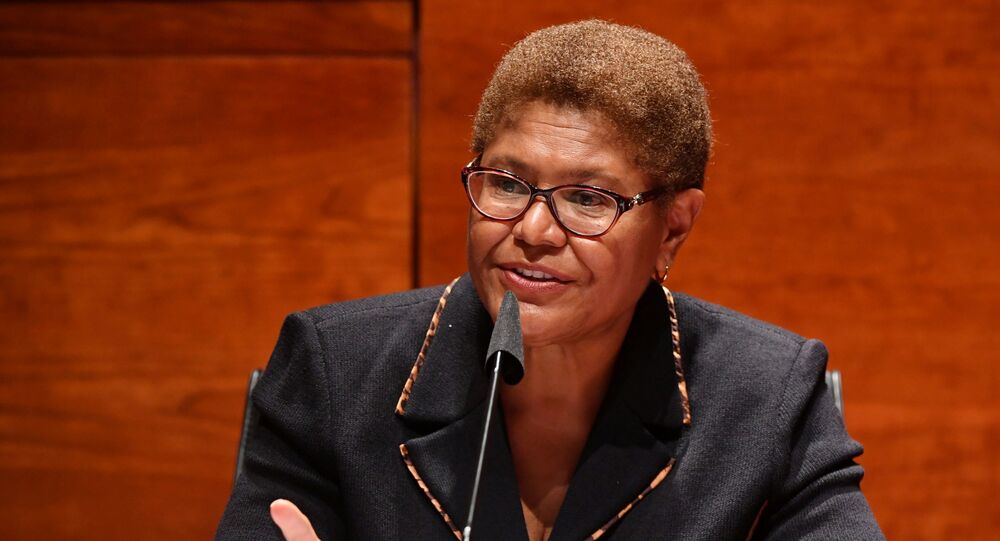 A number of social media users went on to speculate that with this reveal, Bass' chances to become Biden's running mate are probably not looking good.

California Rep. Karen Bass has apparently emerged as a top contender for the position of Democratic presidential hopeful Joe Biden's running mate. But a video of her participating in a ribbon-cutting ceremony for one of the Church of Scientology's facilities in Los Angeles 10 years ago has resurfaced online, and could hurt her chances.

According to the Daily Caller, Bass served in the California General Assembly when she gave a speech at the event in question on 24 April, 2010.

"This day and this new Church of Scientology is an exciting moment because I know your goal and your commitment is truly to make a difference," she told those attending the ceremony which, as the media outlet notes, was led by Scientology president David Miscavige.

Karen Bass in 2010 at a ribbon-cutting for a Scientology church:
"That is why the words are exciting of your Founder L. Rob Hubbard...The Church of Scientology I know has made a difference, because your creed is a universal creed and one that speaks to all people everywhere" pic.twitter.com/EghkCwqHi6

Bass claimed that the Church of Scientology "has made a difference, because your creed is a universal creed and one that speaks to all people everywhere", and praised the group's founder Ron L. Hubbard.

Many social media users went on to speculate that this reveal may not bode well for Bass' VP prospects, with some also making rather unflattering remarks towards the Church of Scientology.

I imagine the Biden folks have seen this pic.twitter.com/IWNWfLBPGG

This should disqualify her. This organization has been shown to be abusive, and, dare I say... CRAZY?!

welp..... this must be the shortest number of days on the Top 3 VP list before getting dropped

Politico journalist Alex Thompson suggested that the episode in question is “partly an LA/CA politics thing”, as the Church of Scientology apparently has "a lot" of powerful and rich people in the area Bass represents, musing that "there are political risks of picking a VP who hasn't undergone the vetting of a national campaign".

There are political risks of picking a VP who hasn't undergone the vetting of a national campaign before like Kamala/Warren. There could be weeks of little, distracting stories like this under the national glare.
If he thinks she's the right person for the job it may not matter

​Previously, Joe Biden stated that he would announce his pick for vice president in the upcoming presidential election during the first week in August.