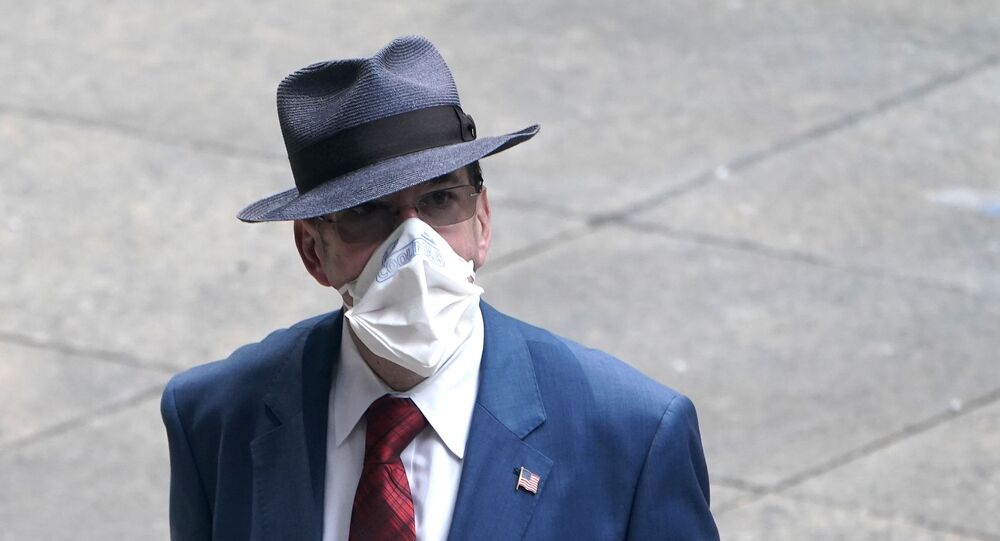 The closer the 3 November United States presidential election gets, the more Russia cards seem to be played, as the Trump administration has rolled out new accusations of Moscow turning anti-racism protests violent and attempting to "meddle" in the electoral process.

Unnamed US government officials identified two Russian "military operatives" seen as spreading disinformation on the coronavirus pandemic to "exploit a crisis that America is struggling to contain ahead of the presidential election", The Associated Press reported.

According to the cited officials, Russian intelligence uses "a trio of English-language websites" to spread disinformation on COVID-19, InfoRos.ru, Infobrics.org and OneWorld.press. The websites are positioned as news outlets that cover global affairs and all have social media pages on Facebook, with the number of followers varying from 56 to an estimated 37,000.

The US officials claimed that "stories in well-written English, often with pro-Russian sentiment and anti-US sentiment" promote "false narratives". In particular, they pointed to the articles "Russia's Counter-COVID Aid To America Advances The Case For A New Detente" from OneWorld.press and "Beijing Believes COVID-19 Is a Biological Weapon" from Infobrics.org., both of which are stated to be opinion pieces.

The first is an overview by an American political analyst, Andrew Korybko, of the reaction to Russian coronavirus-related aid to the US and its "symbolism". The second is a digest of "speculations" on the origins COVID-19, with the author raising a broader issue of accepting modern realities in which "biological weapons are methods that have long been used and that form a fundamental part of modern warfare", written by Lucas Leiroz, a research fellow in international law at the Federal University in Rio de Janeiro, Brazil.

GRU Behind It All, Again

The cited officials pointed at two people they believed stood behind the websites.

According to the report, Denis Valeryevich Tyurin and Aleksandr Gennadyevich Starunskiy, who are held accountable for the "disinformation" allegations, both used to serve in a "GRU unit specializing in military psychological intelligence and maintain deep contacts there".

Denouncing the "sophisticated but insidious efforts" of the three sites, the cited US officials did not say these "efforts" were related to the upcoming US presidential election, suggesting, however, that several articles raise the possibility that US figures may be involved in corruption or provide coverage that does not try to promote the candidacy of presumptive Democratic presidential nominee Joe Biden.

According to Brussels-based EU DisinfoLab, mentioned by AP, "InfoRos is evolving in a shady grey zone, where regular information activities are mixed with more controversial actions that could be quite possibly linked to the Russian state's information operations".

After several "mainstream media outlets", particularly AP and The New York Times, reached out to OneWorld.press, the website released an official response to the allegations, insisting it was "categorically false" to see the outlet as connected with GRU. The editorial team dismissed the accusations as "defamation", noting that "sharing one's opinion does not make them a GRU agent".

"Everyone is entitled to their opinion about anything, which is their personal interpretation of the facts. Attempting to intimidate them into self-censoring is against the very principles that the US and its allies claim to support at home and abroad", the response read.

The article suggested that US Secretary of State Mike Pompeo might as well be a GRU agent, since he voiced thoughts similar to what a political analyst once wrote for OneWorld.press.

"Quite clearly, America's top diplomat and former CIA Director is openly talking about how his country believes that "there's an opportunity" to, as his questioner phrased it, "coax [Russia] into the battle to be relentlessly candid about the Chinese Communist Party". As it so happens, one of our authors, the same one whose article was cited by both the AP and NYT, has been writing about that for a while and directly touched upon that point in his referenced analysis", OneWorld wrote.

As the United States gets closer to the 3 November election date, concepts of "highly likely" and "almost certainly" seem to be joined by a new "quite possibly" suggestion. It is difficult to recall any US issue that Washington has not attempted to blame Russia for, from boosting violence in nationwide anti-racism protests, to "meddling" in the US presidential elections, and now the coronavirus pandemic.

Groundless concerns that Moscow is trying to "intervene" with America's electoral process were voiced by candidate Biden, who claimed he was briefed by intelligence sources on such a possibility. There is no evidence to back these concerns.

Russia has repeatedly denied all allegations, offering the US to use official channels to communicate or roll out complaints - something that Washington ignores, escalating waves of new accusations.

Accusations by the Trump administration of disinformation campaigns have continued, as Sputnik and RT were earlier accused of spreading "disinformation" on the coronavirus pandemic after Newsweek reached out to Sputnik for comments on claims that the Pentagon monitored its social media in search of COVID-19-related 'fake news'. Later, Newsweek released what appeared to be a Department of Defence document overview of social media coverage by Sputnik and RT after the Pentagon was "tracking [the] information environment" in Russian media.

Russian presidential spokesman Dmitry Peskov dismissed claims that Moscow is running a coronavirus-related disinformation campaign as "unfounded", after Reuters reported on allegations rolled out in a "European Union document".

Trump on China's Alleged Disinformation on COVID-19: 'Every Country Does It'