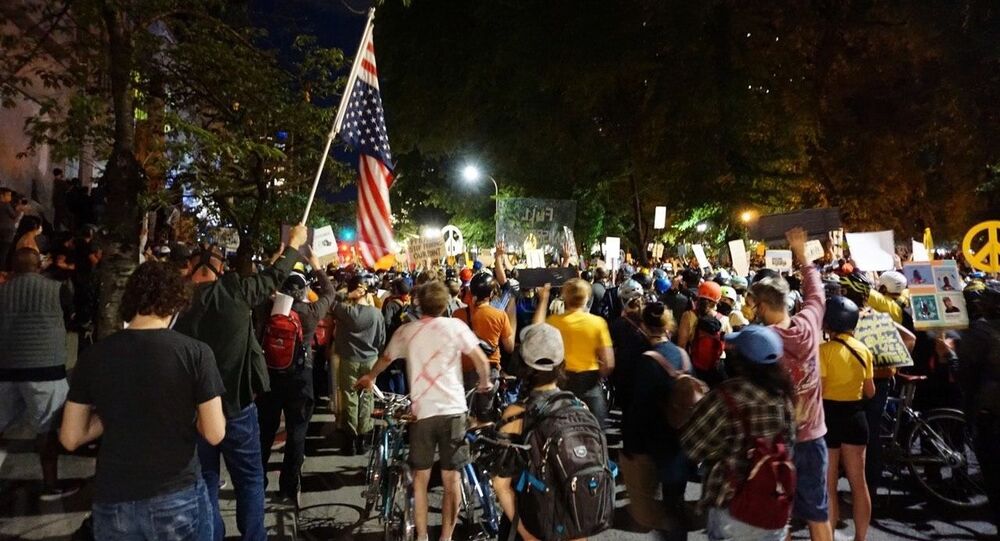 PORTLAND United States (Sputnik) - Another night of protests in the US city of Portland was about to turn violent on Thursday, but dozens of women from the "Wall of Moms" movement formed a human chain to separate Black Lives Matter activists and federal law enforcement agents, a Sputnik correspondent reported from the scene.

The federal agents remain in the courthouse. Protesters who appear to be eager for action periodically try to break through the fence, various items being are thrown over the heads of women "guarding" them. Among the objects are plastic bags, which the activists seem to plan to set on fire.

"Why are you defending a slave tower?" a protester yelled.

The radical part of the protesters are chanting: "Shame on you!"

The "Wall of Moms" activists have lawyers' phone numbers written on their wrists in case of detention.

One of the "Wall of Moms" activists told Sputnik that they had come there to "protect lives."

"We are here to show everybody that it is peaceful. We are trying to keep it as peaceful as possible by staying here," she said,

Teal Lindseth, a BLM protest organizer and a civil rights activist, told Sputnik that she is also the mother of an almost 6-year-old. She added that hundreds have already joined the new group, "Wall of Moms," to protect those protesting police brutality.

When asked to formulate their mission in short, Lindseth replied: "To change the world. To show people that our lives matter."

She added they try to ensure that every protester has goggles and tear gas protection.

"We are not peaceful, but we are not violent," she summed up.

Hours earlier, the Office of the Inspector General of the Department of Justice launched an inquiry into allegations concerning the use of force by federal forces during protests in the cities of Washington, DC and Portland.