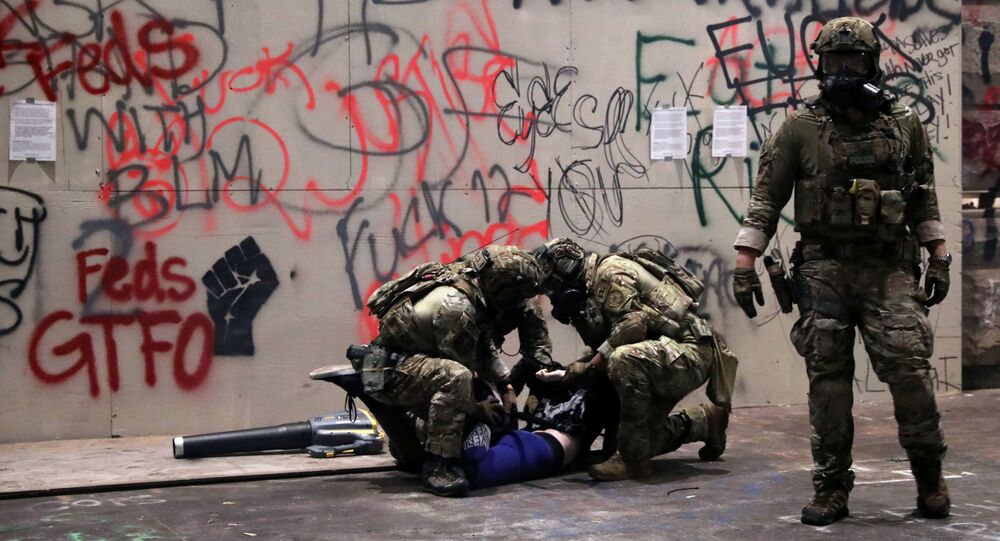 Earlier, acting US Secretary of Homeland Security Chad Wolf said that federal law enforcement officers arrested 43 protesters who had been engaging in violence in Portland, Oregon, since Independence Day.

A Russian TV crew was attacked and beaten by US police officers while covering protests in Portland in the early hours of Wednesday, a Sputnik correspondent reported.

The journalists were filming an attempt by protesters to beseige a court building where federal law enforcers, deployed to the city despite objections by the local authorities, are located.

According to the Sputnik correspondent, the US police hit Russian cameraman Viacheslav Arkhipov with a baton on his arm, took away his camera and smashed it. Arkhipov, filming protesters' attempt to set the entrance to the courthouse on fire at the moment of the attack, was thrown to the ground.

Yulia Olkhovskaya, filming the same scene on her mobile phone, was attacked by a policeman from the back. The police officer seized the smart phone, grabbed the woman by the head and took off her helmet. Olkhovskaya fell to the ground, she kept shouting she was a representative of the press. The woman has scratches from falling to the ground.

Prior to that, both Arkhipov, Olkhovskaya and Artur Gabdrakhmanov, the Sputnik correspondent, were attacked with tear-gas. All of them were wearing press pass badges.

Protests against police brutality and racism have erupted in Portland and other US cities after the death of African American man George Floyd in police custody. However, some of the protests have turned violent, prompting President Donald Trump to send federal law enforcement officers in Portland to maintain law and order - and to protect a federal courthouse that has been the focus of the protests for several weeks.