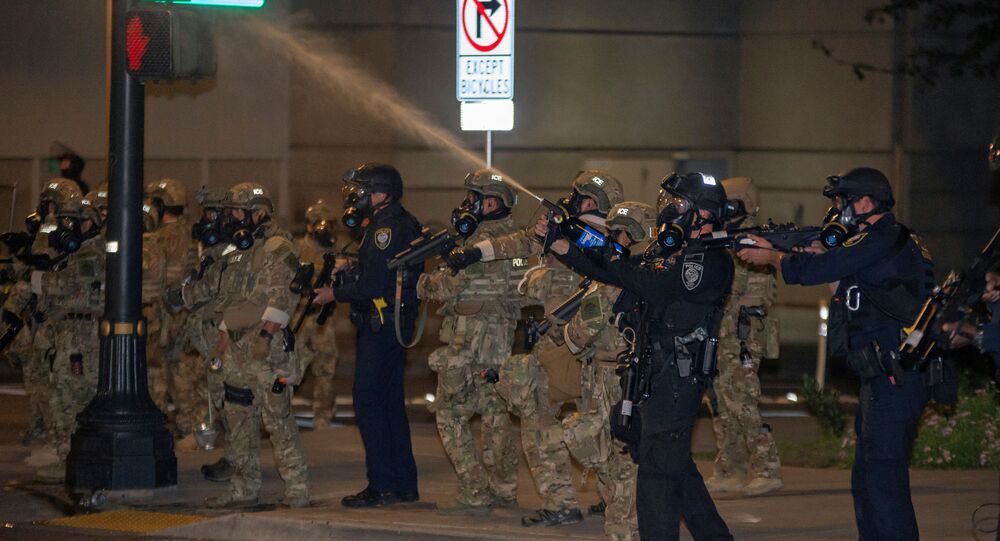 Portland has been dealing with ongoing protests against racism and police brutality since the 25 May death of African American man George Floyd while in the custody of white police officers in Minneapolis.

In a letter on Sunday, House Democrats called to open an immediate investigation into reports of camouflaged federal agents illegally arresting protesters in Portland and "elsewhere" in the US.

They said that Inspectors General (IG) of the Department of Justice (DOJ) and Department of Homeland Security (DHS) should investigate reports of agents from different elements of DHS and the US Marshals Service picking up and detaining demonstrators in unmarked vehicles.

"The Attorney General of the United States does not have unfettered authority to direct thousands of federal law enforcement personnel to arrest and detain American citizens exercising their First Amendment rights", the letter pointed out.

According to the Democratic lawmakers, acting DHS Secretary Chad Wolf "appears to be relying on an ill-conceived executive order meant to protect historic statues and monuments as justification for arresting American citizens in the dead of night".

"The legal basis for this use of force has never been explained—and, frankly, it is not at all clear that the Attorney General and the Acting Secretary are authorised to deploy federal law enforcement officers in this manner", the lawmakers noted.

They also signaled support for US Attorney for the District of Oregon Billy Williams's previous request for an IG DHS probe into the incidents in Portland.

The letter was released after Portland's Democratic Mayor Ted Wheeler condemned the presence of federal officers from the DHS in the city as "completely unconstitutional" and a "threat to our democracy".

He urged President Donald Trump to withdraw federal law enforcement troops and order them to remain in their "own buildings". Wheeler described sending these forces to the city as a "strategy" by the Trump administration to "bolster his sagging polling data".

POTUS, in turn, rejected Wheeler's criticism, insisting that the federal government intervened in the situation only in order to protect federal property and Portland's residents, not to "hurt" the city.

We are trying to help Portland, not hurt it. Their leadership has, for months, lost control of the anarchists and agitators. They are missing in action. We must protect Federal property, AND OUR PEOPLE. These were not merely protesters, these are the real deal!

The developments come after Trump ordered federal law enforcement forces be deployed to some US cities, including Portland, earlier in July. He justified the move by claiming that demonstrators were taking over, and declaring that "it was out of control".

© AP Photo / John Minchillo
George Floyd Protests Destroy Property. They Could Also Destroy the Message They Try to Send
The decision was met with criticism by Oregon Governor Kate Brown, who accused Trump of using the power of the federal government to distract Americans from the resurgence of the coronavirus pandemic in the country.

The Portland riots are part of a broader protest movement against racism and police brutality that have engulfed the US since African American man George Floyd died at the hands of a white policeman in Minneapolis on 25 May.

Washington DC Sees Another Round of Protests Against Police Brutality - Video