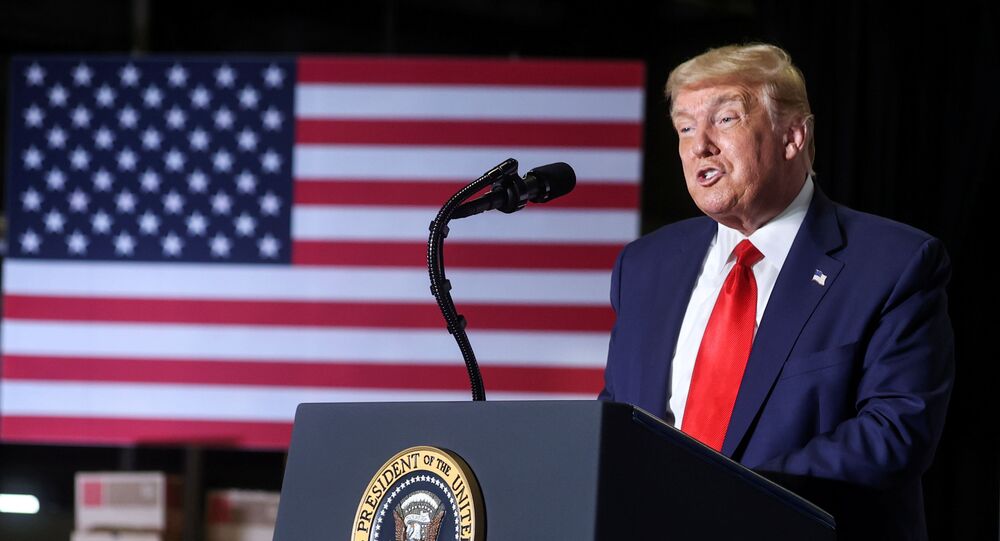 In the light of the upcoming US presidential election in November, recently released Fox News polls show Joe Biden leading, leaving US President Donald Trump behind. Some, including Trump, believe that the current situation is an echo of the 2016 election, a stunning upset despite polling showing him trailing Hillary Clinton by a wide margin.

US President Donald Trump refused to accept the results of Fox News polls showing Joe Biden, the Democratic presumptive nominee, is in the lead, describing the surveys as "fake", while speaking with news anchor Chris Wallace on Fox News Sunday.

Trump suggested that he is "not losing", implying that it is too early to draw conclusions.

“First of all, I’m not losing, because those are fake polls,” Trump said in a  Fox News Sunday interview. “They were fake in 2016 and now they’re even more fake. The polls were much worse in 2016".

In light of these numbers, Trump refused to directly answer a question asking if he would accept the election results if he loses.

Noting that his campaign has its own polls that show Trump leads the race "in every swing state", he criticized the Fox News polls.

“Whoever does your Fox polls, they're among the worst. They got it all wrong in 2016. They've been wrong on every poll I've ever seen", he declared.

POTUS tweeted examples of his polling numbers being "just fine", referring to his response to anti-racism protests turning violent.

The Radical Left Democrats, who totally control Biden, will destroy our Country as we know it. Unimaginably bad things would happen to America. Look at Portland, where the pols are just fine with 50 days of anarchy. We sent in help. Look at New York, Chicago, Philadelphia. NO!

​Trump's reluctance to accept that he might be shut out of the White House comes not long after former Democrat presidential candidate Hillary Clinton suggested that POTUS may not leave "quietly". She also said it was a "fair point to raise" when asked about the possibility of Trump undermining the elections and refuting the mail-in ballot if he does not like the results.

Today, some refer to so-called secret voters as a reason behind the difference between polls and actual election results, as some may intend to support Trump, but choose not to speak - a situation some suggest is similar  to the 2016 US presidential elections.

In 2016, Fox News final polls showed Hillary Clinton ahead of Trump by 4 percent, which was close to her win in the popular vote. As shown by Fox News, 2016 voters seemed to favour Clinton when it came to making decisions about the use of nuclear weapons, with both then-nominees seen equal in national security issues and nominating Supreme Court justices, while Trump led in the economy.

Clinton lost the White House to Trump, as the latter won enough electoral votes to seal the presidency.

A recent poll conducted by Monmouth in the key swing state of Pennsylvania showed that 57 percent of voters believe that there is significant amount of so-called secret voters. Meanwhile, 27 percent of respondents agree that Biden might have secret voters.

"The media consistently reports that Biden is in the lead, but voters remember what happened in 2016," said Monmouth's polling director, Patrick Murray, cited by CNN. "The specter of a secret Trump vote looms large in 2020."

Trump has consistently slammed Biden as "controlled by the Radical left" and has tweeted that the Dem candidate is mentally incapable of serving as president. In particular, Trump recently mocked Biden's newly-introduced economic plan primarily concentrated on climate change and reaching net-zero carbon emission output.

Biden, pressed to denounce Trump's coronavirus pandemic response, criticized the incumbent president for "waving the white flag and actively undercutting our ability to save lives and stop COVID-19, by shamefully trying to block critical additional new funding for the CDC".

According to Fox News Friday polls, Biden leads among women, Hispanics and Blacks, millennials, suburban voters and independents, while Trump is shown to lead among whites, both with and without a college degree, evangelical Christians, rural and senior voters.