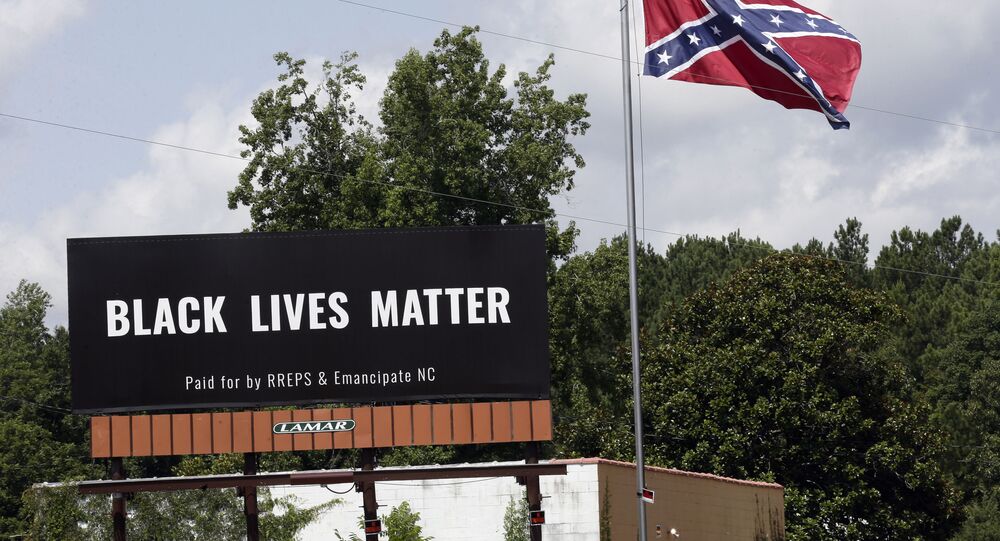 A massive Confederate flag cordoned off with chain-link fencing in Pittsboro, North Carolina, recently gained a new neighbor - a Black Lives Matter billboard, thanks to the combined efforts and donations of local community organizers.

The billboard signage was posted on Monday along US Highway 64 East, less than a month after a GoFundMe campaign was launched in June with a $10,000 goal to cover fees associated with the ad.

Kerwin Pittman, founder of nonprofit Recidivism Reduction Educational Program Services (RREPS) and coordinator with Emancipate North Carolina, told the Associated Press that it was “divine intervention that there was this billboard that was available right beside a Confederate flag.”

“It only made sense to put a Black Lives Matter billboard right in front of this land,” he added.

That Moment When You View The BLM Billboard You Help Put Up Literally Next To Racist (Confederates) Hangout & Flag In...

However, the posting of the sign didn’t come without troubles. According to the GoFundMe organizer, identified only as LC, the Lamar Advertising Company issued roadblock after roadblock for the initiative, some which included adjusting the signage and requiring a “paid for by” notice before the ad could be posted.

In the end, it was Pittman who “saved the day,” according to the campaign. Both RREPS and Emancipate North Carolina were identified as the billboard sponsors.

“They wanted it to be known not only to the Confederate supporters, but also as well as the individuals … in the town that are Black, that they are supported, that their lives matter,” Pittman, referring to community members who joined in the billboard efforts, told McClatchy newspaper the News & Observer.

At present, the billboard has been paid for through the end of 2020, according to the fundraising campaign. Portions of the funds collected have been donated to Emancipate North Carolina, and other portions have been used to create scholarships for the Chatham Organizing for Racial Equity organization.

A Wednesday update from the GoFundMe organizer notes that a deal for a second six-month stint for the sign is still pending from Lamar, as the company has yet to provide organizers with a contract or invoice.

However, despite the signed contract, it’s unclear just how long the billboard signage may be allowed to stay up. Sam White, who owns the nearby flagpole and actual billboard spot, told the AP that he leased the billboard to the Lamar company and that he wants the signage gone at the end of the company’s lease.

Lamar Advertising has reportedly told White that the company has until the end of September to remove the signage.

“I suspect other people don’t like that sign more than I do,” White, who said he’s “not a racist,” told the outlet. He later explained that he allowed friends to fly the Confederate flag on his property after they were outraged over the removal of a Confederate soldier statue from the Chatham County courthouse in late 2019.

Although there is a slight possibility that the newly erected billboard signage may be pulled down in the coming months, the initiative behind it isn’t likely to end. A new GoFundMe campaign was launched earlier this week in an effort to erect “as many Black Lives Matter billboards throughout the city of Raleigh [North Carolina].”

The new campaign is being organized by RREPS and Emancipate North Carolina.

Removal of BLM Statue in Bristol to 'Cost Thousands'