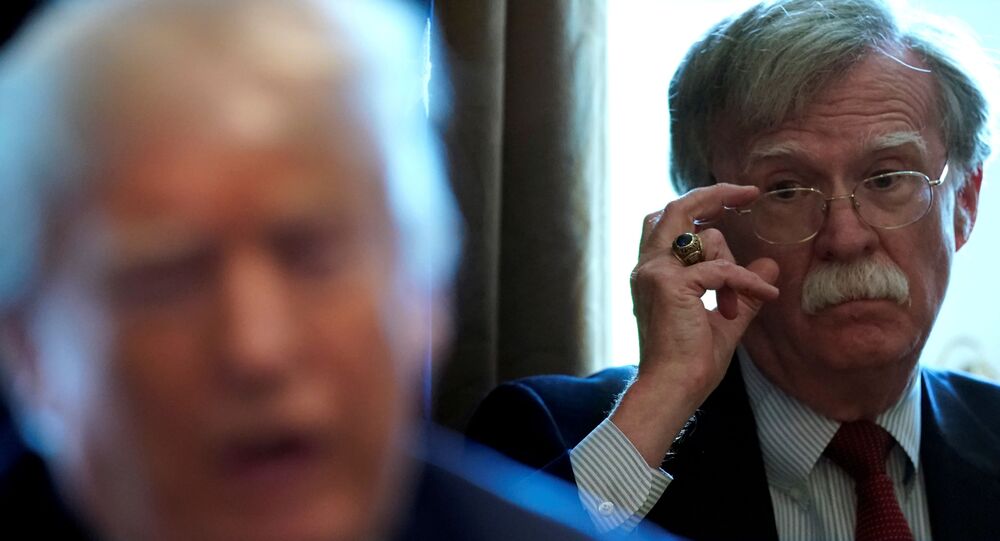 Trump ally-turned-whisteblower John Bolton spent 17 months in the president's administration. Widely described as tough-nosed foreign policy hawk, Bolton insists that President Trump was acting in his personal interests and not in the best interest of the United States.

Bolton, who is set to publish a tell-all memoir about his stint at the White House, expanded on some of the anecdotes from the book and gave a broader picture of a president who is unwilling to learn and is obsessed with re-election.

Check out the highlights of the interview below.

Bolton finds it “unusual” that Donald Trump took part in intelligence briefings just once or twice a week, whereas they should take place every day.

Bolton complains that Trump spoke up too little at the briefings and there were too many people present there. He suggests that Trump didn’t go through a lot of intelligence and generally seemed uninformed on many matters, which made it “almost impossible to sustain a consistent coherent policy over time”.

“There were things that we went over again and again and again, that just didn't seem to sink in, like why was the Korean peninsula partitioned in 1945 at the end of World War II, and what did that lead to and how did we get to that point?” he recounts. “There are just bits of history that help to inform the current context of a lot of situations. And we just never made headway on many of them.”

Bolton’s upcoming memoir, which portrays Trump as being “stunningly uninformed”, contains several claims backing up that account, including one that Trump thought Venezuela was “really part of the United States” (it isn’t) and another that Trump had inquired whether Finland was part of Russia (it isn’t).

The former adviser, who was fired last September over disagreements with Trump on foreign policy, told ABC that Trump also relied heavily on opinions from people who weren’t working in the administration. He lamented there was “an unwillingness on the part of the president…to do systematic learning so that he could make the most informed decisions”.

Bolton believes that the goal of getting re-elected was the “major factor” in every decision Trump made. He says it blindsided the president, who looked for media opportunities like a photo op with North Korea’s Kim Jong-un, and contemplated the reaction in the press.

“When we were in Singapore for the first summit, one of the things he said over and over again was to ask how many press people were gonna be present for his final press conference,” Bolton recalled. “That's what he was focused on. That he had had this enormous photo opportunity – first time an American president has met with the leader of North Korea.”

As for issues of greater geopolitical impact and longer-term perspective, Bolton feels Trump had a short attention span there. He says this attitude played out badly during trade talks with China, when Trump repeatedly placed the emphasis on imports of US agricultural products (hoping to frame it as a political win in the farm states) rather than focusing on “structural” issues that have to be taken into account.

“I don’t think there is a [foreign] policy,” Bolton noted. “My point is that policy is derived from careful thinking, analysis, building up evidence, the critical strategic task of matching resources with priorities. He just doesn’t do that.”

John Bolton joined the administration on 9 April 2018, just two days after a suspected Syrian government chemical attack in the city of Douma, which Moscow and Damascus said had been staged by the White Helmets and local militia. The United States, along with its allies the UK and France, bombed government sites in Syria in response. Bashar al-Assad’s government called the airstrikes a violation of international law.

Bolton said that he felt there was “obstruction” from the Defence Department in the lead-up to retaliation, because the Pentagon didn’t present enough options to choose from. He believes that Donald Trump did not fully understand “all of the implications of what he was doing” as a result.

That request – which Democrats argued amounted to a quid pro quo and abuse of power – led to an impeachment inquiry and trial, which ended in Trump’s acquittal in the Republican-controlled Senate. Bolton refused to testify to the House Democrats investigating the affair and indicated later that he would speak in the Senate if required, but Republicans voted against calling witnesses.

He told ABC that Trump explicitly linked the provision of that Ukraine aid with a Biden probe in a conversation in August 2019, weeks before Trump’s request was made public in a whistleblower complaint. The substance of that conversation has been reported by The New York Times, and Trump denied talking about the aid. Bolton now claims Trump lied.

The president talked about Biden and Ukraine “more and more” as time passed by, he added. “And I think this was a case of him listening to outside advisors, and maybe some of his inside advisors as well, and just becoming obsessive on the point that if he could crack open what happened in Ukraine, he could discredit Biden – discredit Hillary as sort of a – icing on the cake. And that that would be an enormous boost for his reelection. There was no doubt this was political.”

Bolton explains that he defied a congressional subpoena because he felt that the Democrats launched the investigation to shield Biden’s presidential nomination – something he considered to be “as bad and somewhat equivalent to Trump”.

He argues that the investigation was “misused” by the Democrats, because they did not try to sway the mind of Republicans who might have supported a broader investigation and instead turned the process into a “partisan catfight”.

Ultimately, he believes, his testimony would not have made a difference because “minds were made up” in the GOP: “The only way to win an impeachment would have been to get Republicans to go along. And the Democrats abandoned that idea almost before they got started.”

John Bolton says there have been some other instances when he perceived Trump’s behaviour as being close to obstruction of justice. He detailed the case of Turkey’s state-run Halkbank, which was investigated by the Justice Department on charges of helping Iran evade US sanctions.

According to Bolton, Trump agreed to intervene in the investigation at the request of Turkish President Erdogan in 2018. “And the president said to Erdogan at one point, ‘Look, those prosecutors in New York are Obama people. Wait till I get my people in and then we'll take care of this.’ And I thought to myself – and I’m a Department of Justice alumnus myself – ‘I’ve never heard any president say anything like that. Ever.’”

In another episode, Bolton recalls, Trump pushed to remove sanctions-related penalties on Chinese tech company ZTE after a conversation with Xi Jinping. “This was not part of some sustained inter-agency policy-making process,” he adds, saying that he found that conversation “very troubling”.

“I don't think he’s fit for office,” he concludes. “I don’t think he has the competence to carry out the job. I don't think he's a conservative Republican. I'm not gonna vote for him in November.”