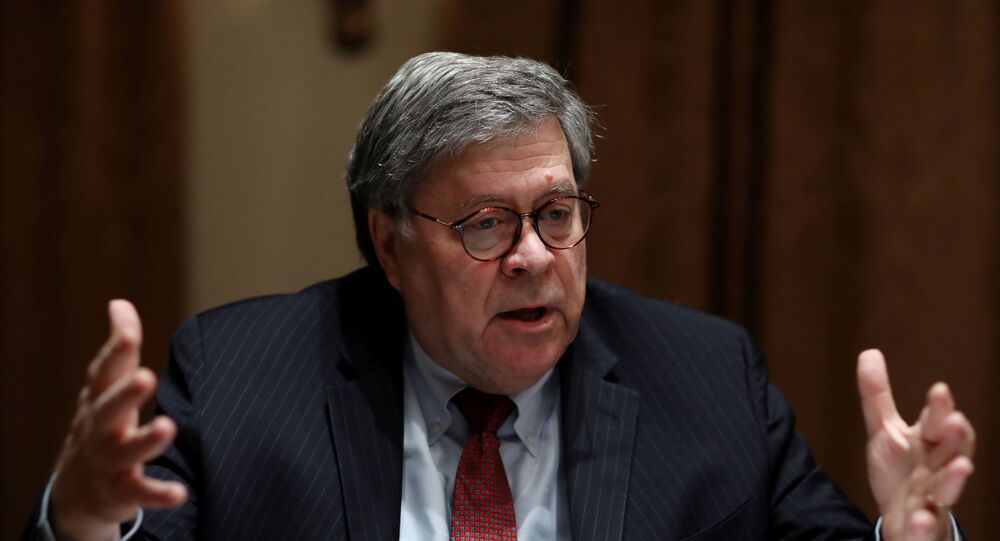 Barr's interview, in which he shares his opinions on antitrust law, comes amid high tension between US President Donald Trump and social media, as Twitter and Facebook flag and remove his content for breaking terms of service. Trump, in response, initiated an executive order that would make it easier for social media platforms to be sued.

US Attorney General William Barr in an interview on Fox News reacted to two conservative news sites - The Federalist and ZeroHedge - allegedly being punished by Google for "biased" coverage of the George Floyd anti-police-brutality protests, a claim made by NBC earlier in the week and denied by Google.

Barr asserted that tech companies are "being more selective and they're starting to censor different viewpoints", contrary to the "wide variety of views" they had previously.

"There's something very disturbing about what's going on. Our republic was founded on the idea, and the whole rationale was that there'd be a lot of diversity of voices and it would be hard for someone to be able to galvanize, big faction in the United States that could dominate politically and oppress a minority, and yet now we have with the Internet and with these big concentrations of power, the ability to do just that, to quickly galvanize people's views because they're only presenting one viewpoint and they can push the public in a particular direction very quickly", he said during his interview.

Barr praised a new antitrust law being promoted by the Department of Justice as a way to address the allegations he described and "challenge companies that engage in monopolistic practices".

The AG noted that the DoJ made it clear that, despite the companies' right to flag or remove content they consider inappropriate and "unlawful" regarding their terms of service, the terms must be made "clear".

The legislation, which was initiated by President Donald Trump who was angry at social media for flagging his commentary over terms of service breaches, if approved, could withdraw legal protections tech companies enjoy, according to reports, making it easier for social media platforms to be sued.

As the conflict between Trump and social media has escalated, Twitter flagged several more Trump posts, including those on mail-in voting, the George Floyd anti-police-brutality protests, and the use of a red triangle symbol, which Trump's campaign claimed was an Antifa symbol, and then stated that the use of the former Nazi-era symbol was merely an emoji. The most recent Trump posts to be deleted by Twitter and Facebook include a edited campaign video with a so-called 'racist baby', crafted with CNN-like captions and subsequently removed over a copyright complaint from the parents of the toddlers in the video.

Earlier in the week, NBC reported that two conservative news sites had been banned and excluded from Google Ads by Google parent company Alphabet, Inc., for "pushing unsubstantiated claims" over the George Floyd anti-police-brutality and anti-racism protests. Google denied the allegations, insisting that The Federalist has not been demonetized and the company "worked with them to address the issues".