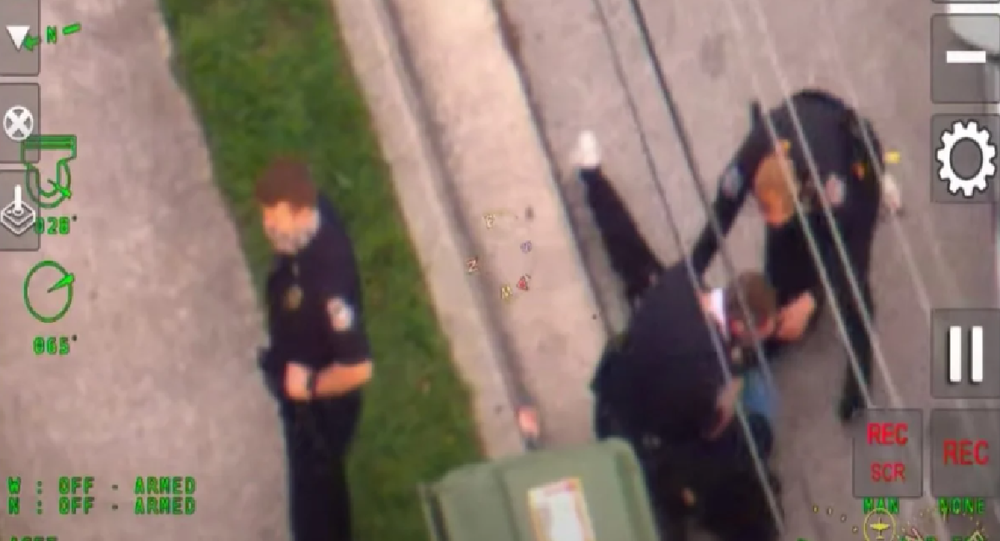 An unidentified Sarasota, Florida, police officer has been placed on administrative leave and is at the center of an internal investigation after a video was posted on social media showing him placing his knee on a black man’s neck during a May 18 incident.

In the video, which was filmed by a bystander, two Sarasota Police Department officers can be seen trying to arrest 27-year-old Patrick Carroll. Three police officers were called to the scene to respond to a domestic issue, and Carroll was arrested on charges related to domestic violence/battery, possessing possible ammunition by a Florida convicted felon and resisting law enforcement without violence, WFTS reported.

​One of the officers involved in the incident said that after they handcuffed Carroll, he tried to pull away and refused to get inside the police car. A police incident report obtained by CNN says the officers then used “minor force” to subdue Carroll and secure him on the ground until he calmed down. At one point in the video, an officer’s knee can be seen on Carroll’s neck.

The cellphone footage of the incident was uploaded to social media on Monday by Carroll’s mother. The Sarasota Police Department has said that it was unaware of the footage until it was tagged in the video. The police department added there was no complaint filed about the incident at the time of its occurrence.

In an interview with WFTS, Carroll said that he suffers from asthma and scoliosis and had trouble breathing when the officer placed his knee on his neck.

“As I’m yelling, and asking why am I being detained, he started putting his knee on my neck,” Carroll said. “While he’s saying I’m resisting, I’m just moving around so I can have circulation in my body and my throat.”

The Sarasota Police Department released a statement on June 1 confirming that the officer in the video who placed his knee on Carroll’s neck has been placed on administrative leave.

“Chief DiPino was disturbed to see an Officer kneeling on the head and neck of an individual in the video. While it appears the Officer eventually moves his leg to the individual’s back, this tactic is not taught, used or advocated by our agency. The individual did not require medical attention nor did the individual complain of injuries during the incident,” the statement adds.

This incident comes in the wake of protests across the US and the world following the brutal killing of 46-year-old, unarmed black man George Floyd in Minneapolis, Minnesota, last week. Former police officer Derek Chauvin has been charged with second-degree murder after kneeling on Floyd’s neck for more than eight minutes. An autopsy has revealed that Floyd died of asphyxiation from sustained pressure and officials have declared the case a homicide.

Washington state’s Pierce County Medical Examiner’s Office also concluded this week that the death of 33-year-old black man Manuel Ellis was a homicide. Ellis, like Floyd, also said “I can’t breathe” while in police custody. The medical examiner’s report revealed that Ellis, who was killed in Tacoma, Washington, in March, died due to oxygen deprivation, respiratory arrest and the physical restraint used on him.