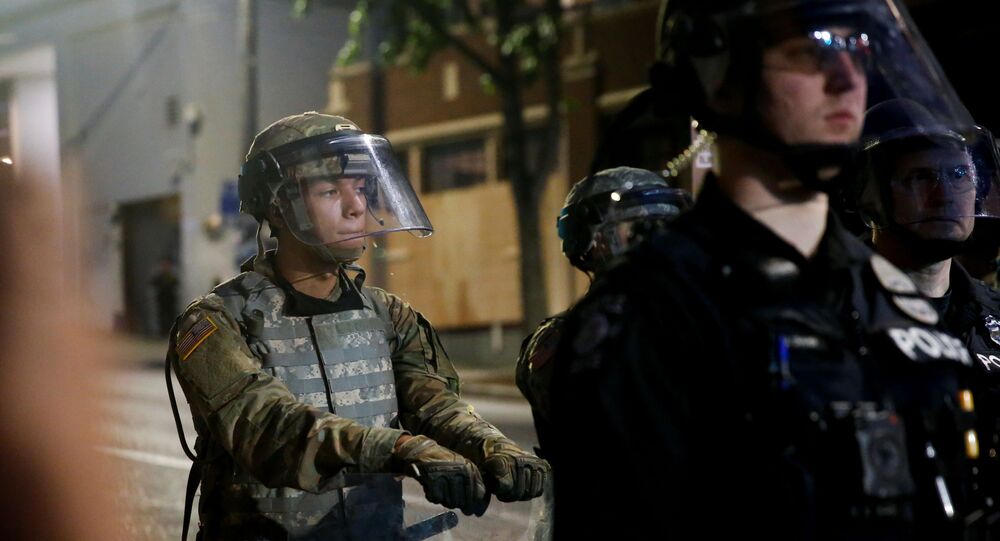 US President Donald Trump sparked criticism with his threats to deploy military forces in states that are unable to stop violent riots, erupting from protests over the death of African American George Floyd at the hands of the police.

Many Pentagon officials, both current and former, were appalled by US President Donald Trump's alleged attempts to use the military for his political goals, Politico reported citing Department of Defence brass, some of whom chose to remain anonymous. His most recent decision to use the military to stop protests in the US was seen as such an attempt by some people in the Pentagon, according to the media outlet.

One anonymous senior Pentagon official, cited by the media outlet, shared that there was a "growing concern" in the Department of Defence that the course chosen by President Donald Trump will bring nothing good to the US military.

"Now you’ve injected the military into a moment in a political way. It just doesn’t seem right", the DoD official, whose opinion was shared by several former colleagues interviewed by Politico, said.

Trump's plan to quell the unrest using the military might turn into a disaster as American servicemen have never been trained in running such missions and hence are not prepared for them, Mick Mulroy, former deputy assistant secretary of defence, opined.

"The decision to use active military forces in crowd control in the United States should only be made as a last resort. Active Army and Marine Corps units are trained to fight our nation’s enemies, not their fellow Americans. American cities are not battlefields", Mulroy said.

The situation around Trump's threat to deploy the military was exacerbated by a report claiming that in a conversation with President Trump on the matter Defence Secretary Mark Esper referred to the US cities engulfed in protests as "battlespace".

Chairman of the Joint Chiefs of Staff, Mark A. Milley also received his share of criticism after appearing in his military fatigues alongside Trump and Esper as they walked for a scandalous photo-op at St. John's Episcopal Church after police brutally removed protesters from nearby Lafayette Square. Prior to this, Milley was appointed by Trump as a key person observing possible military deployments in US cities under the yet to be invoked Insurrection Act.

© REUTERS / Jonathan Ernst
A demonstrator raises his hands as police officers and Washington, DC National Guard military police officers stand guard during a protest against the death in Minneapolis police custody of George Floyd, near the White House, in Washington, U.S., May 30, 2020

One anonymous defence official told Politico that there was a "significant level of consternation" in the Pentagon over how Milley's appearance in military fatigues as police harshly dispersed the protesting crowd might send the wrong message and "muddle" the military's reputation as being disconnected from politics.

Some Pentagon brass reacted more harshly to Milley and Esper's appearance in public and apparent acceptance of the roles bestowed upon them by Trump. James Miller, a Pentagon official and member of the Defence Science Board, left his post, while condemning Esper's actions in his resignation letter.

"President Trump’s actions Monday night violated his oath to 'take care that the laws be faithfully executed', as well as the First Amendment 'right of the people peaceably to assemble. You may not have been able to stop President Trump from directing this appalling use of force, but you could have chosen to oppose it. Instead, you visibly supported it", Miller wrote addressing Secretary of Defence Mark Esper.

Some officials, however, defended Milley in interviews with Politico, calling him "a perpetual hype man", who can become "the loudest, strongest, most extreme advocate" of a pitched idea. According to one anonymous official, sometimes such an attitude is an advantage for the military, but is quite the opposite in light of recent events.