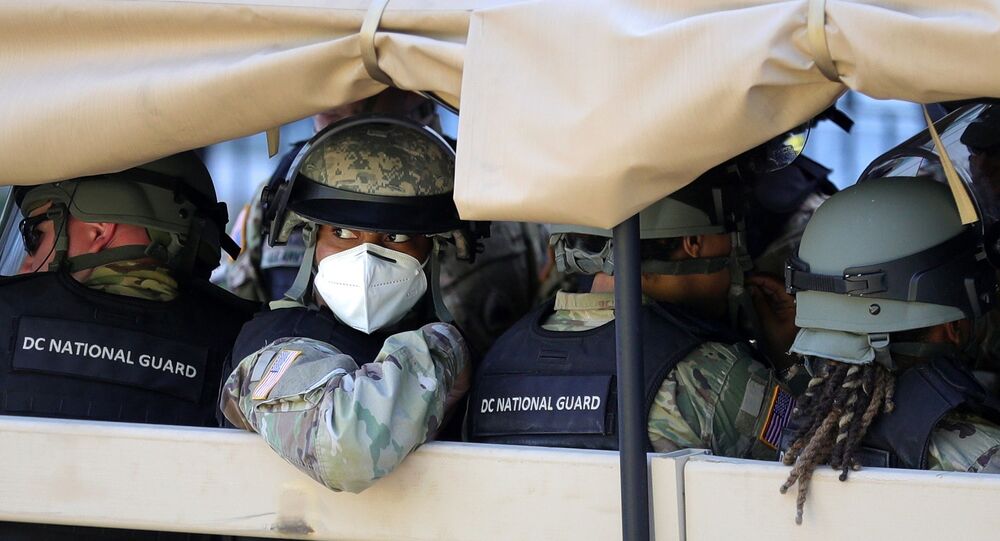 Members of the United States National Guard have descended on the nation's capital ahead of the city's scheduled curfew, which runs from 7 p.m. local time to 6 a.m. the next day.

US troops are expected to assist with security measures in Washington, DC, amid demonstrations related to the May 25 killing of George Floyd, an unarmed black man in Minneapolis, Minnesota.

Video posted on social media by reporter Philip Crowther captured the National Guard between the Eisenhower Executive Office Building and the White House.

The National Guard has arrived. This is between the Executive Office Building and the White House. pic.twitter.com/2HXXRLABYB

Sputnik correspondent Sean Blackmon captured footage of the military vehicles arriving in the US capital.

Military vehicles with troops and and an unmarked bus roll out a couple hours before curfew #DCProtests pic.twitter.com/mB84GbXi2Y

According to CNN, a military police battalion comprised of between 200 to 250 active-duty troops is scheduled to arrive by Monday night. However, they will not have the authority to arrest or detain protesters.

Demonstrators near the White House were confronted by military police in riot gear. The authorities are expected to begin enforcing the curfew by 7 p.m. local time.

Military Police taking place outside The White House for the last hour before curfew. #dcprotests pic.twitter.com/q1lFhkFENm

A continuation of these nationwide race-related demonstrations comes alongside the release of Floyd's updated autopsy report by the Hennepin County Medical Examiner in Minnesota.

Earlier Monday, Floyd family attorney Ben Crump held a press conference and unveiled details related to an independent autopsy conducted by renowned medical examiner Dr. Michael Baden.  The family-ordered report and Crump's statements pushed back against a preliminary autopsy report that suggested there were "no physical findings that support a diagnosis of traumatic asphyxia or strangulation."

Despite US President Donald Trump's vocal opposition to looting and riots, 45 has not announced any plans to invoke the Insurrection Act - the federal law that grants the US president the ability to deploy active-duty US troops to areas of unrest around the country.