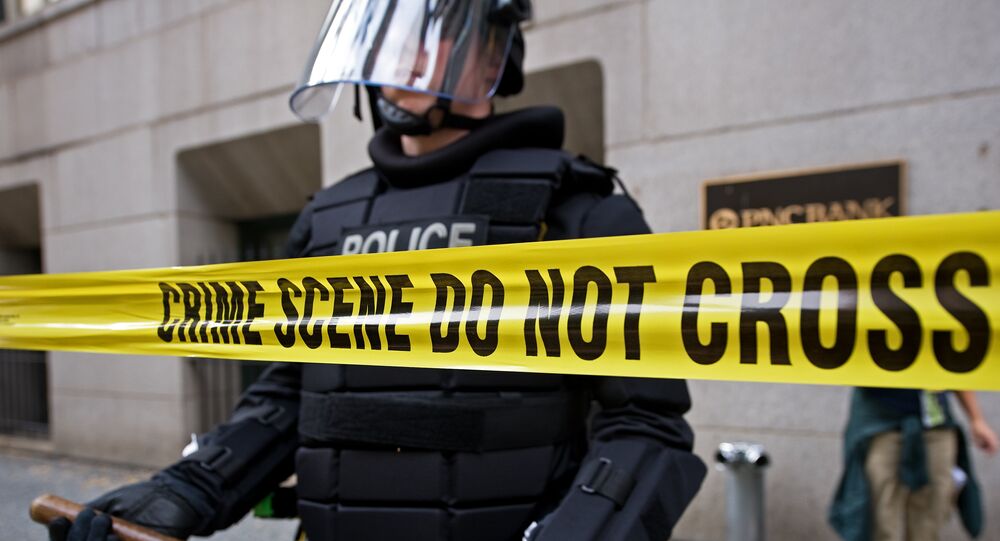 US Spending Millions on Riot Gear, Private Security in Response to Pandemic

Even though arrests have sharply declined during the COVID-19 crisis in the US, the federal government is still buying up riot gear and hiring more and more private security services, some of which are being paid for by congressional budget relief funds.

Amid the trillions of dollars in spending by the US government to respond to the COVID-19 pandemic has been millions of dollars for security services and police equipment, including riot gear and disposable handcuffs.

One contract found on the US government contracting website beta.sam.gov issued on March 23 by US Department of Veterans Affairs (VA) sought roughly $26,000 in equipment from Galls Inc., including “police gear, disposable cuffs, gas masks, ballistic helmets, [and] riot gloves,” according to the posting. The contract is marked as “emergency acquisition,” noting “presidential issued emergency declaration, or a major disaster declaration” as justification for expediting the order.

Just 10 days after that contract was penned, two Arizona Democratic congressmen, Reps. Greg Stanton and Ruben Gallego, reported Galls to the Federal Trade Commission and Attorney General William Barr for “price gouging, plain and simple” on personal protective equipment (PPE) sales. According to their letter, N95 masks and other PPE saw a 600% markup compared to prices just two weeks prior for several large purchases by police and fire departments in the city of Phoenix, Arizona.

In response to the accusations, Galls posted a statement on April 3 promising “no profits” from PPE sales to first responders.

Another VA contract rushed by the pandemic went to Botach Tactical on March 17 for $63,334 for “police protection equipment for Washington, DC, VA police in response to COVID-19 outbreak.”

However, the police and military equipment dealer also has a record of fraudulent business practices. In 2016, Botach Tactical’s owner, BarKochba Botach, was convicted of illegally selling a community college security officer a second handgun with a larger-than-legal magazine size by using a legal exemption meant for police officers. The security officer then passed that gun to a family friend, who used it in a homicide, according to the Los Angeles Times.

The VA has sunk major money into expanding security services in the last two months. The Intercept, which first reported the story, noted the extent of the practice, pointing out that VA gave private security company Redcon Solutions Group more than $1.6 million in contracts for guards for “COVID-19 screening security guard services,” while 1st Class Security was handed $2.1 million and Servexo Protective Service $155,000 for similar services.

Some of this money has come from the Coronavirus Aid, Relief and Economic Security (CARES) Act, the $2.2 trillion stimulus bill signed into law on March 27, which provided some $850 million to the Coronavirus Emergency Supplemental Funding (CESF) Program, a Bureau of Justice Assistance (BJA) initiative to “assist eligible states, local units of government, and tribes in preventing, preparing for, and responding to the coronavirus.”

“Allowable projects and purchases include, but are not limited to, overtime, equipment (including law enforcement and medical personal protective equipment), hiring, supplies (such as gloves, masks, sanitizer), training, travel expenses, and addressing the medical needs of inmates in state, local, and tribal prisons, jails, and detention centers,” the BJA, a Department of Justice agency, says on its website about the CESF.

In addition to security at testing centers, private security services have also seen a spike in contracts for health care, grocery and even residential hotel properties, with some security officers working 70 and 80-hour weeks to fill customers’ needs.

“I’ve been receiving requests for armed guards in the city at hotels and places of business that might be partially residential,” Lisa Dolan, president and CEO of Securit, a security company, told Security Magazine in early April. “It’s a lot like right after 9/11, the calls you’re getting. They want 24-7, armed. There’s an uptick because it’s like a ghost town. [Bad actors] look for opportunities. The police are busy doing other things, so bad actors are going to take advantage of it. [Her clients are] looking to protect their assets.”

“It really shows, in many ways, that the powers that be are preparing for an ascending, massive dissent like which we haven’t seen,” Texas whisperer Brianna Griffith, producer and host of the show People's Republic, told Radio Sputnik’s Political Misfits on Monday.

“This has been sort of the latest iteration in a larger trend in society, since the so-called ‘Global War on Terror,’ of essentially the militarization of all of society,” she said. “It’s the preparation by those who know [a] level of protest is coming … to try and repress those more violently than we’ve already seen.”

“They know there is essentially this kind of class war going on. The Pentagon knows what the class dynamics here are. Those of us who are the working class, those of us who are of the oppressed classes, need to understand that as well,” Griffith told hosts Jamarl Thomas and Bob Schlehuber.

Police Use Force, Tear Gas Against Anti-Government Demonstrators in Warsaw