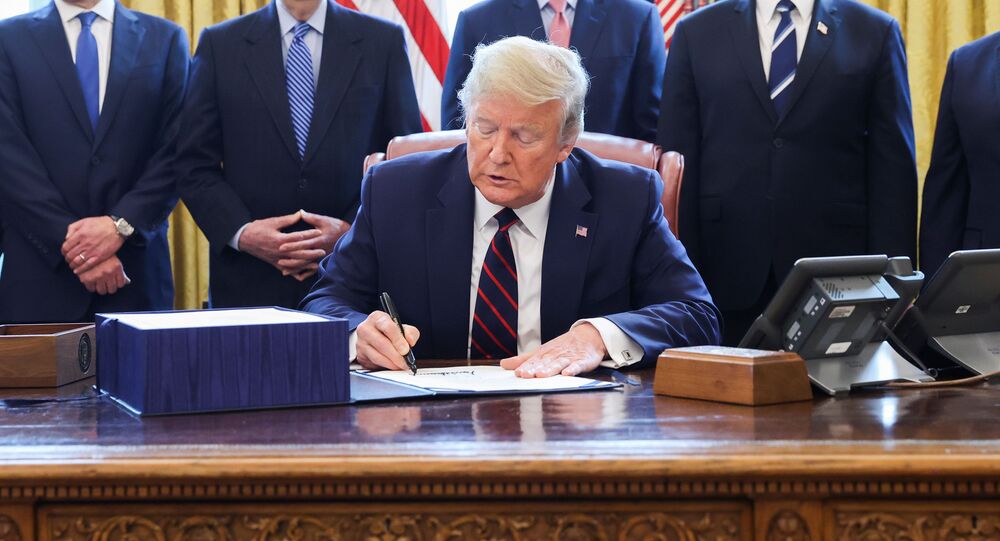 US President Donald Trump has signed into law a $2 trillion relief package aimed at assuaging the economic and fiscal chaos wrought by the COVID-19 pandemic, which has shuttered businesses across the country, sent millions of families home with truncated paychecks and plunged Wall Street into a panic.

The signing comes a week after lawmakers initially promised the bill would be passed, but political jostling and attempts at adding pork-barrel provisions to the huge financial package repeatedly barred its passage. However, the Senate finally passed the bill on Thursday, and the House quickly approved it on Friday, sending it down Pennsylvania Avenue to the White House for Trump’s official signature.

Making light of the matter, Trump told attendees of the signing ceremony that he had "never signed anything with a 'T' on it," referring to the multitrillion-dollar figure attached to the measure.

​"I want to thank Democrats and Republicans for coming together and putting America first," he later added, noting that the government relief measures could ultimately exceed $6 trillion.

The bill provides $2.2 trillion in economic stimulus, including cash payments of up to $1,200 for millions of families who make less than $75,000 per year as well as huge payments to state and territorial governments to buttress their responses to the pandemic, financial relief for flagging industries such as airlines and cruise lines, and funds for the the US Centers for Disease Control and Prevention (CDC), the country’s primary agency for handling responses to infectious diseases.

CNN reporter Jim Acosta noted that on the list of officials present in the Oval Office at the time of the signing, not one was from the opposition Democratic Party. More than once, Democrats resisted passage of the bill because they felt its provisions were inadequate.

​This bill follows previous measures taken by Congress to provide unemployment insurance and food assistance for millions of American workers, as well as extensive moves by the US Federal Reserve, the country's central bank, to restore confidence in the financial system.

Together, the US has committed some $6 trillion to responding to the COVID-19 pandemic and its various contingencies, totaling roughly 30% of the country’s entire yearly economic output.

According to the New York Times database, there are more than 93,500 confirmed cases of the novel coronavirus in the United States as of Friday afternoon, and more than 1,400 deaths have resulted. The day prior, the US overtook China as the country with the most identified cases of the respiratory illness.